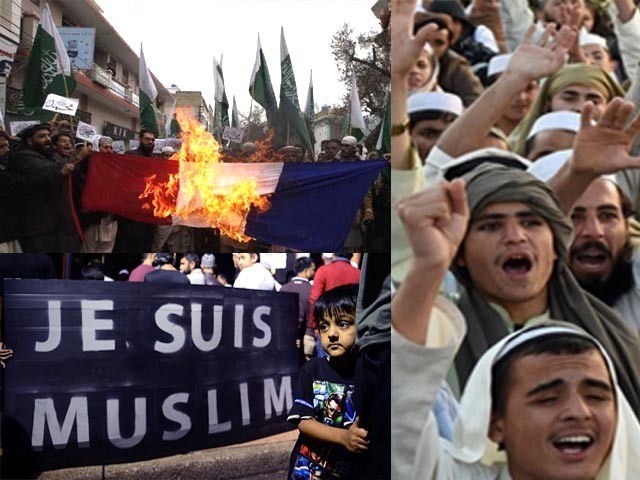 Muslims need to come out on the streets hand-in-hand when something as devastating as the shootings in Paris take place, to show our discontent with both extremist Islam and institutionalised racism. PHOTOS: AFP/FILE

Two deranged men walk into an unsuspecting newsroom and turn the workspace into a warzone.

The men chant during their attack, scapegoating Islam and Allah in the process. The numbers start piling up: 50 shots fired, 11 injured, 11 dead and one religion to blame. Cherif and Said Kouachi’s act of insanity will now be added to the steadily growing list of horrific deeds committed by a select few individuals that have come to define a community of over 1.6 billion Muslims worldwide.

I’m sitting at home, reading about the Charlie Hebdo shooting online. My thoughts and prayers go out to the families of friends who have lost loved ones in the shootings. However, they’re not the only people my condolences are going out to. I’m thinking about the women who choose to wear hijab and the apprehension they must be feeling about going outside tomorrow looking so obviously Muslim.

I’m thinking about the families who are hoping to eventually settle in France and the rest of the Western world, but will now have their settlement applications denied. My thoughts are with Muslims all over the world who may be wondering if their faith is truly to blame for what took place today. Although not an extremely religious person myself, I am struck by the unfairness of the situation. Hundreds of thousands of people will be unwarrantedly punished for the actions of a few.

In Chapel Hill, North Carolina, three young Muslims are shot dead. The police arrests and charges Craig Stephen Hicks for the shooting and releases a statement the next day attributing an “on-going dispute over parking” as the cause behind his horrific crime. Both national and international news sources are slow to report on what has happened and when they finally do, they describe Hicks as a ‘suspect’ and as ‘the accused,’ but are slow to label him a terrorist, despite his continued public condemnation of all things related to religion on Facebook.

I wonder as I read the news, what would have happened if Craig Hicks had been a Muslim? What if a Muslim man had walked into the home of three promising students only to shoot them execution style and walk out? Would we still be waiting for the police to investigate and determine whether the crime can be classified as one fuelled by religious hate? I think not.

As I sift through news about the shooting, my thoughts wander and I think back to when I was attending elementary school in New York. I grew up in a post 9/11 world, one in which the word terrorism was almost always linked to Islam. I went to school with kids who were American to their very core and in the late hours of the night, I would wish to be more like them.

Even at a young age, I understood that my links to Pakistan and to Islam would make me, to some of my peers, different and perhaps even undesirable. Young and surrounded by so many people who did not know or even care about my culture, I tried to immerse myself completely into the Western society and leave my cultural roots behind.

Looking back, I am a bit ashamed of the lengths I went to ‘fit in’ with the crowd. The opportunities I missed, whilst pretending to be someone other than myself, are not ones that I can get back. Today, however, I’m happy to say that I have started to feel as homely in a pair of heels and jeans as I do in khusas and shalwar kameez.

The difference between now and then is that I have come to understand where the misconceptions about my religion come from. I will even go as far as to say that some people may not be completely unjustified in what they feel towards Islam. The fact of the matter is they simply don’t know any better.

We, as a Muslim community, need to come together to show that we are more than what is broadcasted on television or written in newspapers. What is the general public supposed to think when the only images they see of Islam are the ones overflowing with violence and hatred? I will be the first to say that it is unfair; that the acts of a minority have left the burden of redefining Islam on the world… on us.

However, I believe it is necessary for the Muslim community in the Western world to go above and beyond in demonstrating the true meaning of Islam as we are the only ones with the power to do so.

Muslims need to come out on the streets, hand-in-hand, when something as devastating as the shootings in Paris or Chapel Hill take place, to show our discontent with both extremist Islam and institutionalised racism. There are 1.6 billion Muslims in the world, and we should not be held responsible for the actions of a minority, just as all atheists cannot be held accountable for the actions of Craig Hicks. We must take it upon ourselves to prove that Islam is more than just jihad, by showing what it truly is.

We will know we have succeeded when the term ‘moderate Muslim’ is erased from our vocabularies – because the world would have come to realise that Islam, in itself, is moderate.

Mina Omar is a student journalist studying in the UK. Born in Karachi, Mina's writing is inspired by a combination of her Pakistani heritage and Western upbringing.