To the Pakistan cricket team: Baby, you’re a firework! 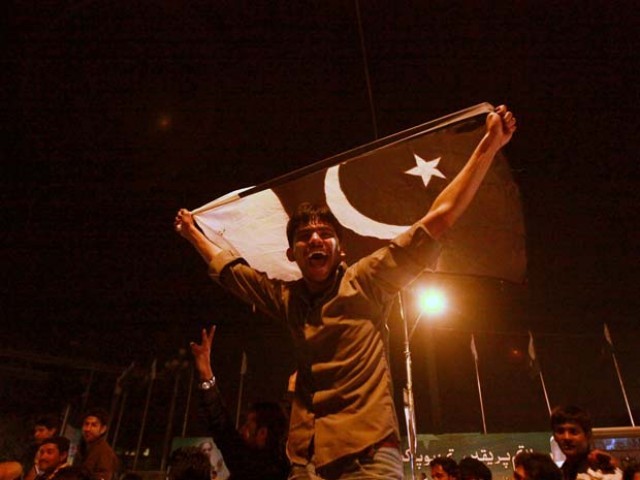 Never in my life have I quoted a Katy Perry song. Never. Until today. Why? Because Saeed Ajmal mentioned a patakha. And because I’m really, really cheesy.

But so are you. We all are. Everyone who has lived and loved Pakistan has grown up in hyperbole, the pink-eyed (I’m referring to gulaabi aankhein) optimism of love songs, the ministrations of our mothers, soap operas that would make Swiss cheese feel impotent and, of course, World Cup songs that companies and people happen to come up with that contain more sugar than the actual product being advertised.

I do, however, try very hard not to be cheesy.

Cheesiness instils in me a desire to log onto Facebook and display the wit that I possess in large quantities. It makes me want to tell the world again and again that I am a rational person and I find all of this utter patriotic nonsense completely useless (in wittier words of course). It makes me want to smile a sarcastic smile and tell whoever is sitting next to me with a great big sigh:

(I doubt if they’ll win the World Cup. All of them are useless)

It makes my inner music snob rear its head and tell anyone who’ll listen that Strings sold out a long time ago and hence I’m not surprised that they came up with such utter drivel.

It makes me want to laugh along with Indian ads that make fun of the Pakistani cricket team, because they show the truth, and I am all for it. Of course we’ll lose to the Indians again. I want to show the world that there is no need to make fun of us because, as it is, we make enough fun of ourselves; we find ourselves pathetic.

I focus on my rationality because I am aware that bad things have happened in my country when people have become irrational. I have desensitised myself to the bad, and I’m currently half way through desensitising myself to the good too. I want to be all brain and no heart. That is what I want the world to see.

I criticise. Non-stop. The team is not worthy. Nothing will come of all of this. Our bowling is horrible. We are weak. We have the worst batsmen in the world. Someone tell Misbahul Haq that this is not a Test match. Someone tell Shahid Afridi to please go to the bathroom before he comes out to bat, lest he be in a hurry to go back in again. Ahmed Shehzad is probably taking a selfie as we speak, batting toh karni aati nahin hai (it’s not like he knows how to bat).

But you know what? For the following month and a half, I don’t care. I want to be stupid.

I want to log onto Facebook and post Saeed Ajmal’s comment as my status and tag all my Indian friends. I want to wear a Pakistani jersey and take a politically incorrect selfie where I’m eating cake shaped like Virat Kohli’s face. With relish. I want to channel Inzamamul Haq’s spirit and say “the boys played well” at the end of the game, even if we lose miserably – I want to keep my criticism for later.

I want to thank Strings for at least bothering to do something. I want to fume at the Indian ad. I want to rave about how awesome our team is. I want to do for Afridi at least a quarter of what the Indian people did for Sachin Tendulkar.

That does not make me a hooligan. That does not make me seem illiterate and intellectually challenged. I am a grown up. I have learnt to control myself. Don’t tell me this is what gets the masses riled up to do stupid things. I’m not talking to them, I’m talking to you – the people that know better, the people that can actually do something about Pakistan’s image in the world. The world will never have respect for Pakistan unless it sees pride from within.

I have already found myself guilty. Put yourself on trial too.

Our major export is criticism.

For the next month and a half, all I want to do is get behind the one thing we haven’t yet completely disowned. The one thing that we have all seen can get each and every soul in the country celebrating in one voice. God knows it’s been a while since we have all sung the same song.

As far as this is concerned, I don’t care what my brain tells me. I’m behind my team. I don’t care if I sound like a whole slab of cheese. Not now.

I will probably end up doing none of these things. I may be too far gone for that.

But for the love of God and all things green, I hope you’re not.

A devout cricketist, Zain graduated from LUMS last year and is now on his way to Germany to pursue a Masters in Linguistics.

Only in Pakistan: In love with life at a refugee camp!