I stand with Altaf Hussain 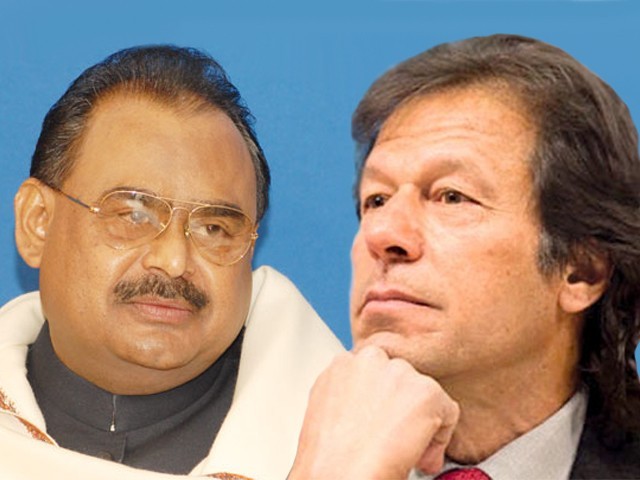 But what about Altaf Bhai? Nobody gave him a shaadi card, not even one of those cards at the dharna.

I fail to understand the hue and cry against the comparisons of the events of Islamabad to a mujra. If anything Altaf Hussain insulted Heera Mandi with the comparison. At least with Heera Mandi everyone knows how much everyone is getting paid, and who is getting screwed. All Altaf Bhai wants is permission to open a branch of Heera Mandi in Karachi, at least it would be cleaner than the Sabzi Mandi and fewer women would get sexually harassed there compared to the Sabzi Mandi.

An event organised by politicians by spending a lot of money to awaken the naujawans is the very definition of a mujra. Tell me this, if it was not a mujra, what is DJ Butt doing there?

DJ Butt has clearly infiltrated the Pakistan Tehreek-e-Insaf (PTI) ranks, on behalf of his Butt brotherhood. The fact that every time Imran Khan starts to criticise Gullu Butt, DJ Butt starts playing a song to disrupt him is clear evidence of his annoyance. PTI may be singing to the tune of, “I like DJ Butt and I cannot lie” for now but he will eventually get revenge for the verbal abuse against the Butt brotherhood, especially the three Butt sisters, Seema Butt, Rabya butt and Kissma Butt; butt is thicker than water.

Maybe the name ‘Butt’ made Altaf Bhai think of other things. Behind the allure of Altaf Bhai’s intoxicating gravel, there are logical facts.

My conclusions are based on sound evidence, I have watched clips of the dharna on all television channels and the only close-up shots I saw were of women. Why would so many women and girls come out on the streets of Islamabad? It is not like they constitute half the population of Pakistan and have the right to exercise their fundamental rights as much as any men. This is Pakistan; politics is a man’s game.

Women do not belong at protests, unless of course they are there to run the kitchens for the dharna. A man’s got to eat you know.

Women did not help Pakistan gain independence, in fact many women could not even migrate to Pakistan because they not allowed out of their houses. Women did not win back democracy for Pakistan from Ziaul Haq. The Women’s Action Forum was mainly an excuse to get together and watch Star Plus.

There is no history in Pakistan of strong female political leaders. People like Fatima Jinnah and Benazir Bhutto are mere fairy tales to tell little girls, they are basically the Pakistani version of Elsa and Anna.

Anna: “Do you want to build a Pakistan?”
Elsa: “Let it go. Soon you won’t be single anymore. Let it go, let it go, the jahez never bothered us anyway.”

Any girl in Pakistan holding political aspirations should just “let it go, let it go”.

Liberals in Pakistan make it sound like if we promote education for girls in Pakistan they will go on to win Emmys, Oscars or Nobel awards for the country.

The question then remains, what were so many women doing in Islamabad? The answer is Imran Khan.

Let us be honest, Imran’s female support is not because he is a World Cup winner for Pakistan, if Javed Miandad was leading PTI, the crowd would look less Veena Malik and more Rana Naveedul Hasan. The speeches might be way more entertaining though.

The dharna was slimming out till Imran announced he wanted to build Naya Pakistan so he could get married, from that point onwards, the crowds have swelled up.

According to Javed Hashmi’s allegations, Imran has also paid DJ Butt for the Mehndi and asked Allama Tahirul Qadri to read his Nikkah. Shaikh Rasheed was clearly in on the plan, as any married man would testify; he was talking about Imran when he said,

All these conspiracy theories have been proven to be true. RAW, CIA and Mosab all combined to create Reham Khan in a laboratory to control Imran. The evidence is all there in black and white, and 50 shades of grey.

The most damning revelation to come out is that it is all scripted. Yes, like any television interview ever in Pakistan, the dharna has also been scripted. The entire script was written by a television production company looking to launch Pakistan’s version of the hit show, “The Bachelor”.

Meera has also thrown her hat into the ring by claiming that she will get married in Naya Pakistan, clear evidence that she was not as tired as she told Captain Naveed she was. However, the clearest evidence is Imran’s decision to hold a jalsa at Mianwali. He clearly wants a lucky girl to become ‘Mianwali’. Imran himself wore his famous black kurta to the jealous, making Attaullah Esa Khelvi swoon,

I do not blame the women vying for Imran’s love; when you compare his looks to other politicians in the country, he is our resident Ryan Gosling.

Rumour also has it that he parted way with Hashmi after being jealous of his popularity with the girls. As the parents reading this may know, the teenage girls all like a baaghi.

The stage was set, the lights were up, the music is playing, and all that is missing was Mrs PTI? Finally true to his slogan , “Mian Sahib jaaan deo, sadi waari aan deo”, Imran finally got his turn.

But what about Altaf Bhai? Nobody gave him a shaadi card, not even one of those cards at the dharna. In these circumstances, it is completely natural for him to act smitten.

I for one absolve him of all blame. I stand with Altaf Bhai.

Look, I have written an article in support of Altaf Hussain, can you please stop asking for my bori size? Wait, this is the text window right? Oh…