When polygamy is allowed in Islam 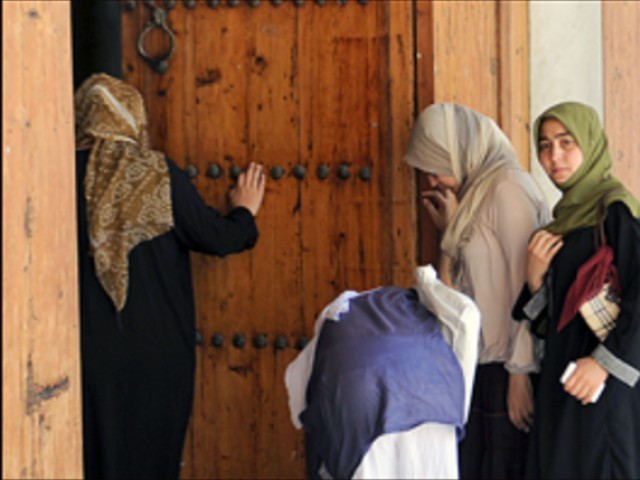 A hard bargain, to say the least; particularly when one considers the punishments which await the ‘unjust’ in the grave, and in the hereafter as per another important article of Muslim belief. PHOTO: AFP

Of the various core tenets of Islam which, since the birth of the said Abrahamic religion, have continued to attract heated criticism from a large variety of non-believers in the faith, as well as some adherents who claim an ancestral kinship to it by way of inheritance alone – whilst harbouring no affinity to it by virtue of any rigorous practice, whatsoever, on their part – the institution of polygamy certainly emerges as a focus for much targeted scrutiny and vitriolic debate.

The notion that a Muslim male, by virtue of his sex and position, in a world which has only ever been a firmament for observing a domineeringly patriarchal culture, is allowed to marry and maintain a total of four wives as an inherent right, has always been deemed excessively controversial and a concept hard to empathise with by the masses.

To women, in particular, this idea is particularly bothersome and understandably so; what with the torrential outpouring of ‘virtuous’ men who inhabit the Muslim world today. This statement, however, is in no way meant to stereotype Muslim men; since unsavoury male characters exist, as a result of an unfortunate incidence of birth, in virtually every corner of the globe. The same, of course, can be said of certain not-so-genteel and sinister women.

Indeed, the many so-called apologists of the faith, throughout the ages have, more often than not, found themselves hard-pressed to offer a defence of this injunction, which is both plausible in its logical scope as well as justifiable in an increasingly individualistic culture marked by such zealous movements as 20th century feminism, among others.

It is saddening to note that this dearth of quality Muslim scholarship, which otherwise might have attempted to bring about some degree of appeasement to the minds of genuinely concerned sceptics, has continued well into this post 9/11 epoch.

As a Muslim continually striving to live by the often hard-to-abide dictates of the faith – primarily due to living in a hypocrisy-laden society which is on offer to all individuals resident in the subcontinent; where the guise of religion is used to pursue selfish personal interests – and one who often succumbs to a variety of sins which are common to the species (for as the saying goes: to err is human), I have often pondered over the issue of polygamy, in the light of my still-feeble yet continually expanding knowledge of Islam.

In fact, truth be told, I have been forced to reflect upon it, with the meditative process costing me many an evening which might have been spent pursuing some other (less worthy) interest; the impetus for doing so being the passionate conversations I have found myself to be embroiled in, with several non-Muslims curious about the Islamic perspective on the matter.

I earnestly believe that it does not do to label oneself as a practitioner of a faith, and to continue to remain in an intoxicated state of pleasurable ignorance with respect to its central doctrines. I believe that people who define themselves as ‘moderates’ are only kidding themselves. A true distinction, which may hold any real meaning, can only be made between those who are regarded as ‘practicing’, and those who are defiantly ‘non-practicing’. Again, the intention here is not to judge, but to elaborate on an opinion.

The provision for polygamy is mentioned in very clear and eloquent diction, in one of the opening verses of the fourth chapter of the Holy Quran.

To even the most cursory of readers, there can be no confusion with respect to the literal meaning of this verse.

A Muslim man, as the verse puts it, is allowed to marry a maximum of four wives, provided that he deals with them in a manner thoroughly bound by the dictates of justice.

It is important then, in a logical progression of thought which should arise as a natural next step in this analysis, to understand what this ‘justice’, so eloquently referred to in the Holy Quran, actually entails.

In order to ascertain the meaning of this term, I looked it up in one of the most celebrated of English language dictionaries available for non-commercial use on the internet; namely, the Oxford Dictionary.

A note to the theist: I would like to make mention of the fact that the Arabic language, one of the richest, and most diversified of languages known to modern-day linguists, features multi-contextual, and often numerous meanings, derived from a single term. This facet of the language, when coupled with the awe-inspiring notion that the Holy Quran, as per Muslim belief, is the direct communiqué of God to Prophet Muhammad (pbuh) is surely enough to make the discerning reader understand that God’s conception of justice must undoubtedly be more elaborate and more thorough in its scope than any argument, or postulation, put forward by such mundane, and ‘worldly’ instruments of knowledge, as man-made ‘dictionaries’.)

According to the said lexicon, the term ‘injustice’ is broadly defined as:

“Lack of fairness or justice”

In the case of polygamous Islamic unions, the concept of fairness demands that a husband treat all his wives with complete, and unfailing, magnanimity; showering on each his equal and undivided attention. The husband needs to provide for the physical, emotional, and monetary, in effect, the complete ‘worldly’ welfare, of each of his wives, without making any allowance for a compromise on his multi-faceted and lavishly distributed affections for each; or his favouring of one spouse over another.

It is only in such cases of ‘properly’ allocated justice, then, that the demands of fair treatment may be met. Anything short of this would be considered as a violation of the Holy Quran’s recommendation for observing justice.

A hard bargain, to say the least, particularly when one considers the punishments which await the ‘unjust’ in the grave, and in the hereafter as per another important article of Muslim belief.

A whole corpus detailing the types of these punishments, to this effect, exists in the hadith literature, sayings of the Prophet (pbuh), clearly warning men who, without just cause, seek to inflict harm or aggression on their wives or children.

When one ponders over this Quranic injunction, even minutely, it is not hard to fathom that very few Muslim men would be able to shoulder such a responsibility in today’s world, let alone succeed in fulfilling it completely.

Assuredly, is it not better, in retrospect, to follow the advice rendered by the above mentioned verse in its latter part and attempt to do complete justice to just one wife?

Such a prescription must surely sound more equitable in today’s world, where closed-door incidents of domestic violence come about as common everyday occurrences and for a man to maintain even one wife with the honour due to her station, is fast becoming an endangered concept.

In a world where women are beaten, raped, and oppressed mercilessly, and subjected to such heinous crimes as acid-scarring and genital mutilations, to haunt them till their very last days. Where women have their inheritances usurped by their male relatives, their children snatched, their basic rights trampled upon and their voices effectively silenced, all to satisfy the whims of an ever-insecure male ego.

It is such barbaric and vile men as these, who as a result of the violence seemingly inherent in their natures smear the name of those few men who actually seek to do good to their female relations and women in general.

As a modern-day Muslim man, it is indeed hard and painful for me to admit that such transgressions against women, more often than not, occur almost pervasively, and with complete, unaccounted-for impunity in today’s Muslim world, perpetrated by savage men who claim to be the followers of a man who showed the utmost, kindest, and almost breath-taking regard for his wives and daughters.

A man of incomparable virtue, and a moral stature which encompassed every endearing trait, who in his last reported sermon explicitly commanded his followers to safeguard, honour and defend women (referring to them as the very trust of God, with inviolable rights) and left behind a noble legacy which only a few men nowadays, if any, truly aspire to follow.