Ali Baba, the chaalis in-laws and you 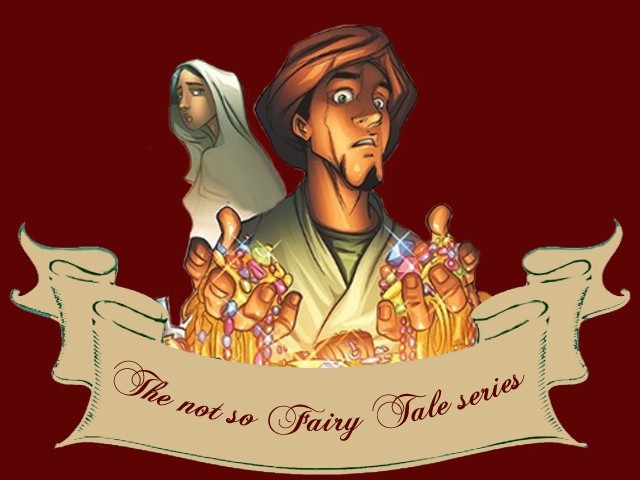 How much better is Ali Baba than the band of thieves?

“I love to see a young girl go out and grab the world by the lapels. Life’s a bitch. You’ve got to go out and kick ass.” – Maya Angelou

We have the wonderful tale of Ali Baba and the Forty Thieves from the book Arabian Nights where Ali Baba steals from the thieves and does not distribute to the poor. And after all is said and done and the thieves and the chief are dead, Ali Baba – who is the only one alive and privy to the secret cave code of  “Open Sesame” – does not bring the loot to the village and distribute it amongst the needy, but instead keeps the whole stash for himself.

How much better is Ali Baba than the band of thieves? The thieves steal from people, whereas Ali Baba, the poor woodcutter, steals from the thieves and neither returns the monies to the rightful owners nor distributes it amongst the poor. Food for thought, hopefully?

Who is the actual protagonist of the story?

A wise girl named Morgiana, who is confident and great at crisis management, always has a solution and almost always saves the day.

He was a good man, but a weak one. Every time he went to visit his family (the cave of looted treasure), he came back conflicted, divided and emotionally crippled with baggage – what appeared to be treasure, but was just a whole lot of extra baggage – which would eventually weigh down his marriage. The demands, the obligations and the wretched guilt that he was dragging around like dead weight, maybe it was a good idea to measure the actual weight of the baggage?

He kept being fooled by the chief (his sister or mother) time and again, who managed to get into His house by manipulating him, just like the thieves. But each time it was Morgiana, his confident wife who would save the day with her crisis management skills. At the end, when the thieves were eliminated, he still kept going back to the cave, hoping for Morgiana to manage the baggage that he kept bringing back from the cave.

She was a government official who watched big businesses continue their corrupt ways. There were times when she would be seen going inside their offices and walking out with a brief case. Some said the brief case had wads of money, in fact too much money, which made the business owners nervous. Her husband at home knew that the money meant trouble, and hence he found a solution to rid the business owners from sniffing around their house. His solution worked, he turned out to be a real Morgiana.

My friend is a real taker; she comes into my cave of positivity and steals from me. She steals my energy and I let her.

One day, my sister insisted that I let go of my friend. When I asked why, she replied,

“Because she steals your treasure of positivity, and turns it into negative energy, if only your friend used it as positive energy and spread the joy; then I would tell you to keep your friend. Your friend is like Ali Baba.”

“Yes, like Ali Baba, she steals what is not hers to steal and acts like her stealing from you is completely justified.”

A literary paper written on Ali Baba suggests the following:

“Ali Baba and the Forty Thieves has an interesting theme, away from the obvious. The main character does not deserve the good fortune that befalls them. Ali Baba merely saw where the robber’s treasure was, but did nothing to earn his wealth. Furthermore, he cannot be considered to possess much intellectual capacity as he fails to recognise the robber leader even after seeing him on two separate occasions. It takes the courage and intellect of the slave girl, Morgiana, to save Ali Baba from being slain by the robber leader. Ali Baba does not learn from his experiences and continues to blindly permit the chief into his home. Thus, an important moral of the story is the fickle nature of good fortune and that sometimes those underserving are granted that which might belong to those more deserving.”

The loot in the cave, the positive energy, the wads of cash coming home and most importantly, the in-laws who make unnecessary demands, all represent baggage that is draining and unpleasant like the stolen cursed treasure in the cave – the treasure that has a cursed hold on the Ali Babas around us. The question that remains to be answered is, how is the Morgiana in you going to deal with the cursed and shiny golden nugget?

I could answer that question for you yet again, but my job as a writer is to only point you in the right direction. The rest and the most important part has to come from you.

Are you ready for it?