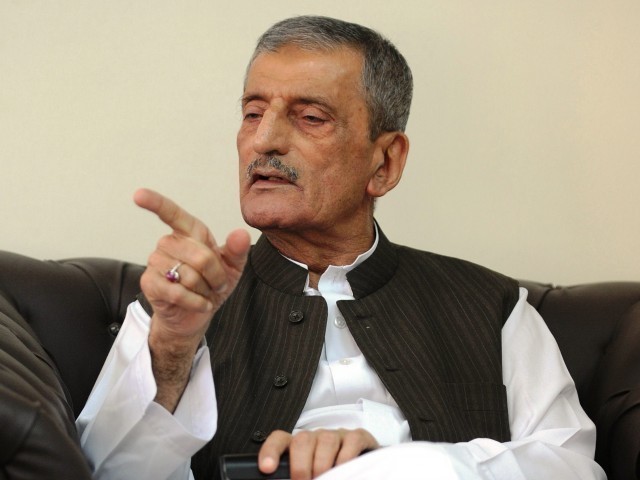 Of course he doesn’t mean to give away the $200,000 he promised. And I doubt he’s likely to visit the families of the killers in France. PHOTO: AFP/FILE

While the country still reels from the attack on the Imambargah in Shikarpur, Ghulam Ahmed Bilour thought it more necessary to talk about an event that happened a month ago, half a world away, and not in conciliatory terms.

Bilour offered a reward for whoever kills the owner of the French satirical magazine Charlie Hebdo, which recently suffered a terrorist attack that killed 10 of its employees, including its editor-in-chief. Given the amount of deaths that the magazine has already experienced, to call for more of it because of the magazine’s allegedly blasphemous cartoons seems excessive at best and an incitement to violence at worst.

One can perhaps understand Bilour’s need for self-preservation. His Awami National Party is the worst victim of militant violence, losing not only its position in government, but also many, many lives in the process, including that of his brother, Bashir Ahmad Bilour. Also, the last time Ghulam Ahmed Bilour pulled off a stunt like this, it worked. After the controversy surrounding the video Innocence of Muslims in 2012, Bilour offered cash reward for whoever killed the man who made the film, even saying that he would kill the filmmaker himself if he could. The Taliban offered him ‘amnesty’ in return. There’s little doubt he’s looking for militant brownie points again.

But regardless of the palpable fear he may have of Pakistan’s militant extremists, and the need he sees to be in their good books, his antics are a heavy blow to the efforts of civil society activists trying to fashion a more moderate Pakistan as well as the religious minorities and sects that are vulnerable to militants.

Take the example of Shama and Shahzad, the Christian couple that was beaten, lynched and then burnt alive on the same charge of blasphemy last year. How can Bilour differentiate between the call to kill them (which was listened to) and the call to do the same to Charlie Hebdo’s owner? And what of the #ReclaimYourMosque campaign? The efforts of many brave Pakistanis to hold their imams accountable? To curtail hate speech and calls for violence of the same kind that Bilour just reiterated? Does he hold a different standard for the militants that threaten fellow Pakistanis and the ones that kill foreigners he doesn’t like?

Of course he doesn’t mean to give away the $200,000 he promised. And I doubt he’s likely to visit the families of the killers in France. In fact, I doubt he’s sincere about the bounty at all. But his words don’t have to be sincere to be dangerous. Even as a cynical ploy, Bilour can’t control the effects of his words. There are enough loons out there, the Kouachi brothers and Mumtaz Qadri among them, to take those words, or that fantasy cash reward, seriously enough to do the deed.

We require politicians to make difficult decisions, to fight when ordinary folk cannot, to be brave in the face of adversity. Because the bar for politicians in Pakistan is so impossibly low (they can preside over famine, rampant corruption, and scandal after scandal and get re-elected) Bilour wasn’t required to do any of those things. He didn’t even have to mention Charlie Hebdo – I doubt the killers’ families were expecting Bilour’s magnanimity – but such is our politics where calling for someone’s death gets you both supporters and safety.

Unfortunately, securing safety for himself means endangering the millions of religious minorities of Pakistan even more than they already are. It also means that the hundreds gathering in support for Mumtaz Qadri know that they, like Bilour, are probably on the right side of history in this country.

In Pakistan and trying to read the BJP manifesto? Nope, can’t access it!