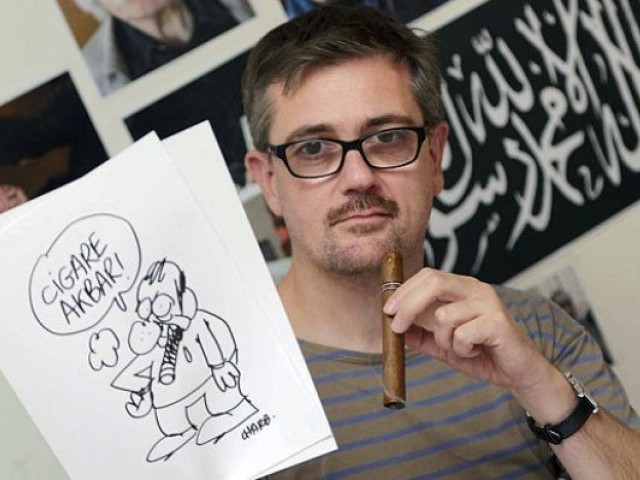 Stéphane Charbonnier, known as Charb, was the editor of Charlie Hebdo. PHOTO: AFP

In my recent post titled Where are all the moderate Muslims?, published on January 8th, 2015, I opened the blog retelling a true story, here it is;

“History tells us a story about a woman who used to throw garbage out every morning as the Prophet Muhammad (pbuh) passed by her house. This was the woman’s practice every morning, the Prophet (pbuh) did not reprimand her neither did he change his route. And then one day, the woman did not appear, the Prophet (pbuh), worried to see the woman missing, knocked on her door and inquired about the woman’s wellbeing. The woman was so overwhelmed by his kindness that it is believed that she converted to Islam.”

I tell this story to children ever so often and question them on it. What is it that they think of the woman? What have they learnt from the Prophet’s (pbuh) reaction to the woman when she did not appear? Why did the woman convert to Islam? Why did the Prophet (pbuh) not change his route, or reprimand the woman?

The answers I get are educated and evolved. Most children put real thought into their responses and I can’t help but give them kudos for it, to which they usually say,

“We had to give it thought, it’s the Prophet’s (pbuh) response that is meant to be the moral of the story; it is inspiring and a real life lesson”.

Full marks on that mature answer, and then I see adults and their reaction to defending Islam – bickering, murdering, slaughtering, burning and giving aggressive outbursts – in short certainly not acting like kids but some self-righteous form of an adult nothing short of dislikeable.

I recently stumbled upon a news story published in The Independent titled Iran’s House of Cartoon to Hold a Holocaust cartoon competition in response to Charlie Hebdo. The title of the story is self-explanatory. A few excerpts from the story can be read here:

“An international cartoon competition has been launched in Iran around the theme of Holocaust denial, reportedly in response to the publication of cartoons depicting the Prophet Mohammed by Charlie Hebdo magazine. Iran’s House of Cartoon and the Sarcheshmeh Cultural Complex have organised the competition and are offering a cash prize of $12,000 (£7,960) to the winner, $8,000 (£5,300) for the cartoonist that makes second place and £5,000 (£3,320) for third place, according to Tehran Times.”

How is one to respond to a story like this?

Having being a journalist for over two decades I certainly have an opinion on it, but my opinion is unimportant. What is important is the collective response of Muslims at large.

Is there any good judgment in responding to insensitivity with insensitivity, indiscretion with indiscretion? Charlie Hebdo made an imprudent decision by publishing what they did and continue to do so, but what about Iran’s House of Cartoon? How is the publishing of cartoons denying the Holocaust wise? How is that diametrically opposed to what Charlie Hebdo continues to do?

Is there any common sense in offending a large group people who remember the inhumanity of the Holocaust with deep sorrow? What do the Jewish people have to do with what Charlie Hebdo decides to publish, or for that matter, what do the billions of Christians have to do with it? If memory serves me right, Charlie Hebdo had a limited circulation with a small following; hence the majority of Christians were obviously not supporting the publication’s ideology until recent events took place.

So what does the Iranian publication want to achieve with denigrating the Holocaust? Isn’t this exactly the same rhetoric and reaction that we accuse hate-mongers like Rupert Murdoch and Sam Harris of?

Freedom of press is essential. For any modern society to move forward, they must be able to speak their mind. But society is only a body of people, their opinions are collective opinions that are mostly only aired to the people they interact with – hence their good judgment is imperative but not vastly as important as that of a publication.

Any news organisation, electronic or print, has a responsibility far beyond that of a single individual. While freedom of press is certainly important, so are sound judgment, wisdom, sense and sensibility.

I am a strong advocate of one being able to speak his mind; however, I took great offence at Charlie Hebdo’s satire disrespecting the Prophet Mohammed (pbuh) and, on the flip side, I also thought that the massacre at Charlie Hebdo’s offices this past January was wrong at all levels of humanity. There is never any justification for slaughtering someone for his opinion and that too in the name of a religion that means peace.

Charlie Hebdo and all responsible media, however emancipated and satirical, must respect the basic tenets of society. If a large body of people, namely Muslims, have refrained all these years from making images of the Prophet (pbuh), then it must be respected. If a large body of people, namely Africans, take offence at being referred to by a certain name, their wishes must be respected. If the Jewish community has suffered an unimaginable loss at the hands of the Nazis in World War II, their suffering must be acknowledged and their feelings towards the same respected.

When did the news become all about seeking revenge, spewing hate, offending a large group of people, disrespecting all religions, and inciting chaos? When?

Needless to say, heads in the media have a responsibility far greater than that of an average individual; hence prudence is the call of the times. Publishing cartoons disrespecting the plight of the Holocaust sufferers is cruel, insensitive and despicable. Let me reiterate that I am not Charlie Hebdo and I am Not Iran’s House of Cartoon.

Freedom of press is a wonderful thing, a powerful thing, that most first world countries enjoy, but in the wise words of Uncle Ben from Spiderman,

Yes it does, Uncle Ben, it certainly does. Try telling the same to the media please – maybe they’ll hear you… just maybe.