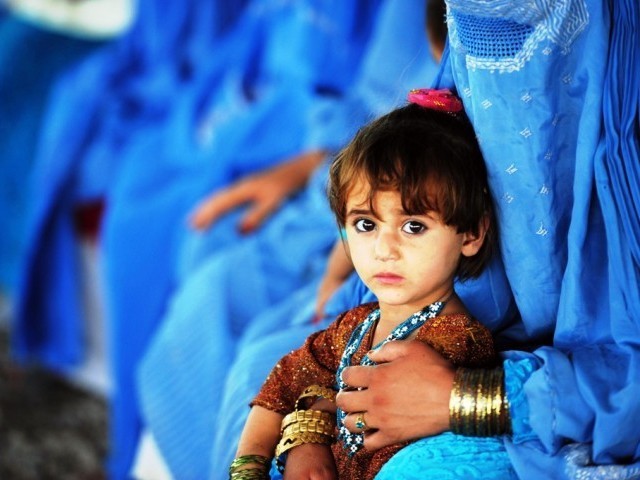 If this issue is not dealt with sensitivity to the existing refugees, it might lead to further deteriorating ties between Pakistan and Afghanistan. PHOTO: AFP

Pakistan’s recent policy of repatriating illegal Afghan refugees from its soil, as a reaction to the Army Public School (APS) attack in Peshawar, is being appreciated in many circles around the country. Many believe that this step would lead to a decrease in the wave of militancy that is currently gripping Pakistan.

These circles believe that Afghan refugees have injected the so-called “Kalashnikov culture” in Pakistani society; that they have introduced heroin and other drugs in Pakistan, which has destroyed millions of young lives. To these people, the root cause of every crime in Pakistan is these refugees. To them, these refugees are directly or indirectly involved in terrorism, and their repatriation to Afghanistan would mean peace for Pakistan. They believe that the same would hold true for the tribal people of FATA and they seem to have exempted everyone else from these crimes.

But these circles could not be more wrong.

While I do agree, to some extent, that such views might have been built upon legitimate grounds, blaming an entire group of people for the actions of a few is downright unjustified. Pakistanis, of all people, should understand that. People need to realise that Afghan refugees are not the sole reason why terrorism is rampant in Pakistan – there are numerous other factors which have led to this state. Every society has good and bad people, but we cannot simply expel one ethnic group just because everyone else is treating them as the scapegoat.

The Afghans, who have lived in Pakistan since 1979, have contributed to a lot of positive things. There are many Afghan businessmen who are running successful enterprises, thus helping the country’s economy. These businessmen pay their taxes to the exchequer and have also employed thousands of people, thus providing economic relief to the masses. Many Afghans have been born in Pakistan, who have received good education and are now serving Pakistan on different forums.

While talking to these Afghans, I came across many riveting stories. But the one thing that I found common in them was their love for Pakistan. They find this land dearer than Afghanistan – because it is in Pakistan that they have grown, received an education, developed businesses, gotten married, established their families and homes, and have created a social group for themselves. Why would they want to return to a land where they have no business, no home, and no relatives whatsoever? Most of these Afghans have married Pakistani citizens – if they are expelled now, their spouses might not agree to go to Afghanistan with them. Who will be responsible for their financial and domestic woes then?

Asking such people to simply leave everything – their property, their businesses and their families – and move back to their land is unfair and unacceptable. The Pakistani people cannot just ignore all the good that these refugees have done for the country.

Alongside this, such a decision might become detrimental for the provincial government as well. If they are forcing the refugees to go back to “their” land, they might bring up the issue of the disputed Durand Line, according to which the area of Peshawar till Attock Bridge is considered as Afghan land. The refugees might push for this debate to happen in the international arena and this may open Pandora’s Box for the federal government, which it certainly cannot afford right now.

Since most of the militants have fled to Afghanistan after Operation Zarb-e-Azb came about, one can insinuate that these repatriated refugees might take shelter with these militant groups and their anti-Pakistani sentiment might be exploited against Pakistan. This policy can backfire for the government on multiple levels.

Keeping these points in mind, we can understand that forced repatriation is not a viable idea for Pakistan. We need to act smartly with regards to the issues at hand. First of all, we need to stop the police from harassing these refugees and badgering businessmen to leave their businesses or pay them a hefty sum. Secondly, we need to scrutinise and separate those Afghans who are involved in terrorist activities in Pakistan from those who are honest, hard-working, innocent individuals.

Secondly, the repatriation process needs to be made in affiliation with the United Nations. Those who are willing to go back to Afghanistan should be shifted to refugee camps and properly registered under the UN. Their Pakistani CNICs, which they have procured illegally from NADRA officials, should be cancelled. Those who are married to Pakistani citizens may be given Pakistani nationalities – like it’s done in the United States. Also, those who have businesses in Pakistan should be exempted from process.Those businessmen who do not pay their taxes should be dealt with according to the law, just like any other business owner.

Lastly, the government should call for aid and funds for education and health from the international community, for those Afghans who are not willing to go back but are becoming a financial burden for the provincial government.

If this issue is not dealt with sensitivity to the existing refugees, it might lead to further deteriorating ties between Pakistan and Afghanistan – and this may be used by other forces to pit the latter against the former.