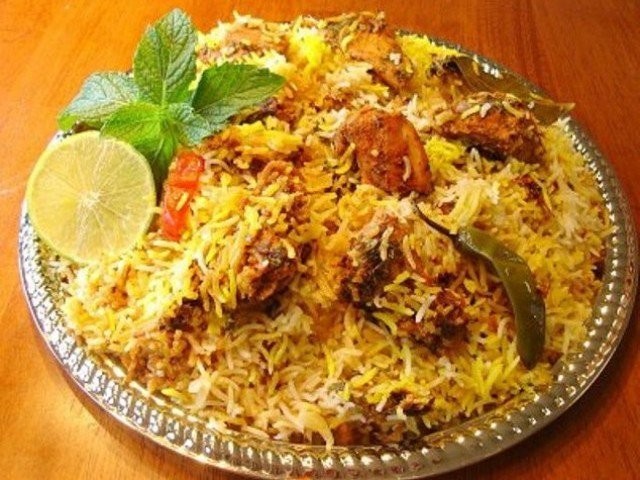 It is believed that the dish was first introduced in the subcontinent during the Mughal era. PHOTO: AFP

Derived from the Persian word ‘Birian’, biryani is a spicy rice and meat dish which is prepared by mixing layers of rice, meat, tomatoes, fried onions, spices, and food colour.

Biryani making is an art – one has to know how long rice should be cooked for, before it can be arranged in layers along with the meat and tomatoes. The rice can become soggy if boiled excessively, or even remain undercooked if not boiled for an appropriate amount of time.

All biryani lovers take their biryani very seriously. They feel irked if the biryani isn’t yellow enough or if there’s no khewra (rose water) sprinkled on top. Some take it quite personally when biryani is not served with raita (yogurt). It has become such an integral part of our culture that no desi wedding is complete without a few deghs of biryani. Moreover, biryani deghs are commonly distributed among the poor during Ramazan and Ashura.

Many of us, however, have no idea how biryani came into our lives and cemented itself as a cultural edifice.

It is believed that the dish was first introduced in the subcontinent during the Mughal era. It is said that biryani originated from Persia via Afghanistan and North India. During the reign of the Mughals, Lucknow was known as Awadh, and the biryani craze there led to the creation of a specialised Awadhi Biryani.

It didn’t take long for the biryani to spread throughout the Indian subcontinent. Various cities and states mixed in their own flavours and tastes to create their personalised versions of the rice dish. It is interesting to note that variants of biryani emerged, just as Emperor Aurangzeb made administrative divisions in various regions. When Nizamul Mulk was made the ruler of Hyderabad and the Aaru Kaadu region to the south of Hyderabad was placed under the Nawab of Arcot, two distinct versions of Biryani emerged in the state of Hyderabad – the Arcot and the Hyderbadi biryani.

We owe the introduction of biryani in Mysore to Tipu Sultan. At the time, it was a royal dish for the Nawabs and Nizams. They used to hire vegetarian Hindus who cooked it with eggs instead of meat.

The history of biryani dates back to the 1800s. There are numerous stories associated with this dish. One story has it that Timor brought it down from Kazakhstan via Afghanistan and Northern India. According to another story, Mumtaz Mahal declared it as a ‘complete meal’ for the army.

Some disagree with the origins of the dish, stating that it originated in West Asia. According to some, the nomads used to bury earthen pots full of meat, rice and spices in a pit. The pots would eventually be dug up after some time; rich with the aroma of spices and the well-cooked layers of rice and meat.

Countries today, however, have their own versions of biryani, such as the Turkish Pilaf with mild spices and nuts in Turkey, Kabuli palao in Iran, Malaysian biryani and Indonesian biryani.

New York is termed as the melting pot of various cultures. It is believed that close to 400 various dialects and languages are spoken in the neighbourhood of Jackson Heights, which is the largest desi corridor of North America.

When I read about the Biryani Cart situated near sixth avenue and 46th street while I was in New York City, my excitement heightened along with my curiosity. The Biryani Cart was established by a Bangladeshi American, Meruj Kumar. Chicken, mutton and vegetable biryani is served here along with a delicious yogurt and chutney. The menu also includes kati rolls and tandoori chicken. It is quite popular around town and has also been nominated for the “Vendy Award” several times. Vendy Awards are awards for street vendors in New York.

It is in the city of New York, closer to midtown Manhattan, where a biryani khoka is situated which serves biryani. What started off as a small business, has now expanded to various locations around the city.

I was delighted to see that the Americans were enjoying the biryani just as much as I was.

Karachi saw its advent of biryani begin in 1969. Most Karachiites would agree that biryani truly gripped the city when Student Biryani opened up. Slowly it turned into a popular Pakistani food chain, and the city has since been hooked.  Student Biryani is a variant of the Bombay biryani. The unique taste of student biryani boasts of black cardamom, black cumin seed and a unique masala blend. Apart from having branches in Karachi, Lahore and many other cities throughout the country, Student Biryani has also expanded to Dubai. The recipe has never been replicated. The first store was opened in Saddar, Karachi by Haji Mohammed Ali. The business is now run by his sons and grandsons.

It is highly unlikely that a Karachiite has never tried it.

With so many different variations of the biryani, one has bound to try at least one. Needless to say, no one has just tried it once – as it keeps you wanting more.