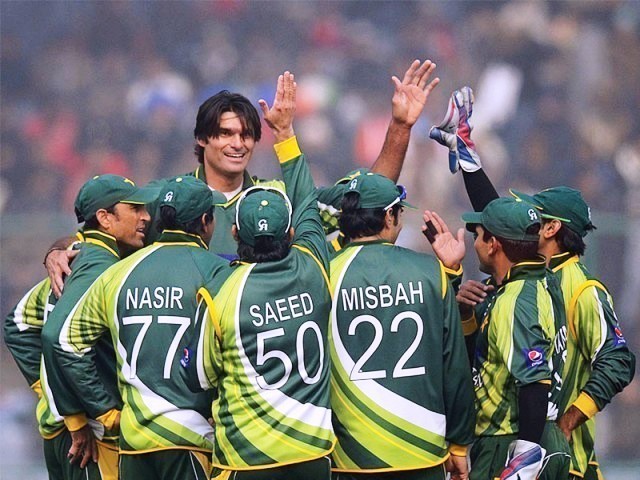 Muhammad Irfan is our only good bowler. If his height is so effective, why don't the other bowlers just sit on his shoulder and deliver their balls? PHOTO: BCCI

As I write this, Pakistan has just conceded 369 runs against the New Zealand batting side. Maybe this would not be so hard to take if I had not grown up watching legends like Imran Khan, Wasim Akram, Waqar Younis and Shoaib Akhtar.

The current state of our fast-bowling makes the heart grow even fonder of Mohammad Sami. Let that sink in, Mohammad Sami. A man who once bowled the longest over in ODI with 17 balls, including seven wides and four no-balls. I will even go to the extent of saying Ataur Rehman was a better bowler than Sami and he could not even keep all his clothes on before delivering the ball.

Muhammad Irfan is our only good bowler. If his height is so effective, why don’t the other bowlers just sit on his shoulder and deliver their balls?

All their biggest ehsaan, Ehsan Adil, can do is not play. Bilawal Bhatti bowls exactly like what his surname rhymes with. I am convinced Bilawal Bhutto is a better baller than Bhatti, if not a better bowler.

The only thing worse than our bowling is Atif Aslam singing in English. Did Strings not see him cover Billie Jean before destroying the best World Cup song ever? Just when Junaid Jamshed was making his comeback to music, we scare him away with a song like that.

Talking about music, what went through the mind of the DJ at the ground who played John Legend’s ‘All of Me’ during the breaks? Does he not know Pakistani fans? No, we do not love all your curves and your imperfections; you either win or do a Maulana Abdul Aziz and run away in a burqa.

This is against New Zealand. A team even Wajahatullah Wasti scored 84 runs against in a World Cup semi-final. If you are too young to remember Wasti, first thank God you did not waste a few lifetimes watching him bat. To offer a comparison, Wasti makes Misbahul Haq look like Shahid Afridi. The storm troopers in Star Wars and Bollywood villains have a better strike than Wasti.

If the Pakistan cricket team is deliberately under-performing in order to take other teams by surprise during the World Cup, they are doing a fantastic job. Khurram Khan, the vice-captain of UAE, even fancies his chances against this Pakistan cricket team. They let us play cricket in their grounds, the least we can do is lose to them and give a huge boost to their chances of getting the Test-playing nation status. Since we banned the hunting of rare birds, our foreign policy requires our team to sacrifice the World Cup to please our Arab overlords. If we are going to lose anyway, why not lose to our Muslim brothers?

Even the most optimistic fan of cricket in Pakistan does not truly believe that we have a chance of winning the world cup. I am not sure if Haris Sohail’s room was truly haunted but the ghosts of New Zealand’s bowlers are sure to keep our bowlers up for a few nights.

Afridi vowed to reclaim his record for the fastest century in ODI Cricket. He just did not clarify that he would be on the bowling side when that record is made. Anything is possible in a match that has Younus Khan bowling actual overs. At his age, some men cannot even go to the bathroom by themselves. Imran won the World Cup to build a cancer hospital, I think we are playing this World Cup to fund the Misbah and Younus retirement fund.

Maybe it is just an elaborate prank by Younis to get back at the Pakistan Cricket Board for missing out on the 1992 World Cup squad.

Why are we playing cricket anyway?

If this was the world competition for the worst selfies in the world, at least Ahmed Shahzad would have had a chance of winning it.

The universe is conspiring to give us some hope. Junaid Khan is out of the World Cup and as fate would have it, another left-arm bowler played his first domestic game. Is it not about time we listen to God’s wishes and pick Mohammad Amir already? We voted for the Big Three, the least they can do is let us pick Amir. Najam Sethi needs to put some pantee puncture in the ICC and make this happen.

If not, there is only one hope in Pakistan.

Think about it, everything will fall into its rightful place. Imran is having a hard time running Khyber-Pakhtunkhwa (K-P), and Junaid is out of the world cup. If we put two and two together, we can get a Khan for a Khan. We have all seen Imran post videos of him working out and running, if he is not getting ready to play in the World Cup, what would be the point of appearing in shirtless pictures? I am sure Veena Malik also wants to be picked for the World Cup.

At least it is a good thing that the Pakistan bowling team will be using two new balls from each end according to the new ICC rule. Believe me, our cricket team needs new balls.

On a serious note though, whoever we pick, let us get behind them and support them throughout. They may not be the most talented Pakistan World cup squad ever but this is what we have. Let us unite and back them all the way.

By all the way, I mean all the way back to Pakistan after the first round.