Why do her clothes matter? 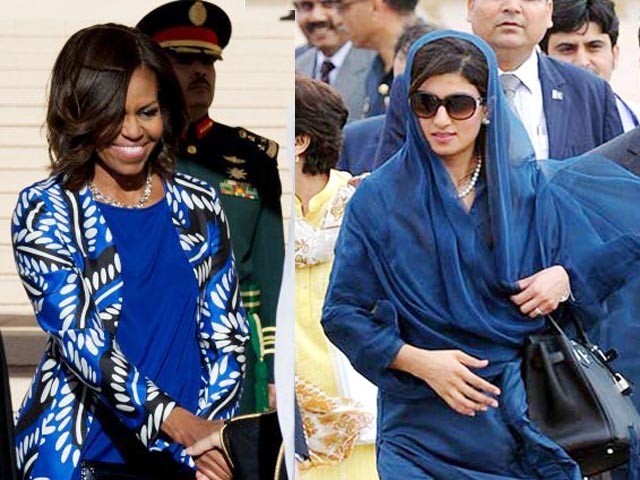 Similar things happen to female dignitaries, whether from the US or from Pakistan. PHOTO: AFP

The only thing we know about First Lady Michelle Obama’s recent visit to Saudi Arabia is that she wore no headscarf. She and her husband, President Barack Obama, probably discussed many worthy issues with the new Saudi King, Salman bin Abdul-Aziz, but to the Western media, what mattered most was what Michelle Obama wore.

The First Lady wore a long sleeved shirt and pants but no scarf upon arrival at the airport in Riyadh. Her unveiled dress code sparked controversy on social media almost instantly and Twitter was flooded with tweets about Michelle’s dress code. Sure, it was an official trip for the First lady but it was official for President Obama too. If a Saudi dress code was applicable to her, why didn’t the self-righteous Twitterati wonder why the president was not wearing an Arabic Thawb?

If we were to compare the criticism faced by Michelle Obama for her dress (or lack of headdress) in Saudi Arabia with the public discussion of a male leader’s clothing we will witness what women face on a daily basis – sexism. The Indian Prime Minister Narendra Modi was the talk of mainstream media and social media for the suit he wore when Obama visited India. While the premier chose to wear a pinstriped suit with his name plastered all over it, the discussion centred mainly on the cost of the suit and not Modi’s lack of adherence to a dress code.

Similar things like Michelle Obama’s incident have taken place with other female dignitaries, whether they have been from the US or from Pakistan. Remember when Hina Rabbani Khar, the then Pakistani foreign minister, visited India in 2011? She landed in India to discuss issues between both countries but the media took greater interest in her Hermes Birkin bag, pearls necklaces and Cavalli sunglasses. A newspaper headline in India read,

“Pakistan puts on its best face.”

“You don’t want the attention to focus on the frivolous.”

She rightly pointed out,

“A guy in my place would never get such attention; nobody would be talking about his suit. I refuse to be apologetic about it; I will continue to be who I am.”

Sexism is not limited to just one region or society.  In the Western world, for instance, Google’s demographic report, released in May 2014, shows a striking deficiency of diversity in their own company, which is said to be the bastion of modernity and progress. According to the report, white males dominate the IT industry and barely 30% women are employed by the internet giant Google.

In African countries, women are the biggest victims in war zones; whether it is tribal warfare or terrorism by Boko Haram, women and young girls, regardless of their religion and tribe, become the victims of rape and kidnapping.

It would be naïve to blame sexism solely on region and religion – we need to understand and accept the fact that sexism is not a result of ‘fundamentalism’ or ‘extremism’ – it exists as a problem in its own right and can’t be clubbed with another. It is all societies and all genders responsible for looking at women only through the prism of their gender.

Sexism has many manifestations and several ways of reinforcement. It can be seen in the idea of putting women in skimpy clothes for commercials advertising men’s razors or ads for manhood medicines. Why do we only see female receptionists in all offices? Some restaurants highlight the shapeliness of their waitresses more than their menu.

In 2011, an American burger chain openly acknowledged in their press release that:

“We believe in putting hot models in our commercials, because ugly ones don’t sell burgers.”

It is time to stop objectifying and judging women, whether it is the First Lady of the United States or some unknown young girl from Africa, on the basis of their attire or body shape. As Andrea Dworkin pointed out in one of her books:

“Woman is not born: she is made. In the making, her humanity is destroyed. She becomes symbol of this, symbol of that: mother of the earth, slut of the universe; but she never becomes herself because it is forbidden for her to do so.”