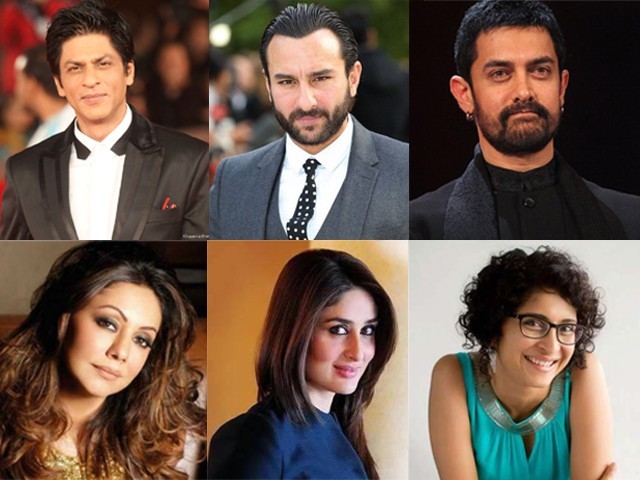 In an editorial in its weekly publication, Hindu Sabha Varta, the Hindu Mahasabha has challenged Shahrukh Khan, Amir Khan and Saif Ali Khan to convert to Hinduism if they really love their wives.

After murdering King Duncan of Scotland in his sleep, Macbeth returns to his wife with his hands smeared in crimson blood. He exclaims,

“How is it with me, when every noise appals me? What hands are here? Ha! They pluck out mine eyes! Will all great Neptune’s ocean wash this blood clean from my hand? No; this, my hand will rather the multitudinous seas incarnadine, making the green one red.”

Later, Lady Macbeth, in a fit of madness whilst walking in her sleep and rubbing her hands, says,

“Here’s the smell of blood still: all the perfumes of Arabia will not sweeten this little hand.”

Likewise, all the perfumes of Arabia, great Neptune’s ocean, and holy Ganges cannot wash away the blood from the hands of those responsible for the Gujarat riots. The world has not forgotten what happened in the streets, alleys and homes of Gujarat in 2002. The world is watching what India’s minorities are being subjected to. This fact was affirmed by the POTUS (President of the United States) Barack Obama during his speech at the Siri Fort auditorium in Delhi. Obama said,

“Our nations are strongest when we see that we are all God’s children – all equal in His eyes and worthy of His love. Across our two great countries, we have Hindus and Muslims, Christians and Sikhs, and Jews and Buddhists and Jains and so many faiths. And we remember the wisdom of Gandhiji, who said, for me, the different religions are beautiful flowers from the same garden, or they are branches of the same majestic tree.”

While citing Article 25 of the Indian Constitution dealing with the Right to Freedom of religion, he said,

“Your (Constitution) Article 25 says all people are equally entitled to the freedom of conscience and have right to freely profess and practise and propagate religion. In both our countries, in all countries, upholding with freedom of religion is the utmost responsibility of the government but also the responsibility of every person.

The peace we seek in the world begins in human hearts. And it finds its glorious expression when we look beyond any differences in religion or tribe and rejoice in the beauty of every soul. And nowhere is that more important than India. Nowhere is it going to be more necessary for that foundational value to be upheld. India will succeed so long as it is not splintered along the lines of religious faith — so long as it’s not splintered along any lines — and is unified as one nation.”

The big question here is: what could have prompted Obama to admonish Modi Sarkar thus on secularism? What could be the reasons behind POTUS’ apparent rebuke to Modi who pulled out all the stops for the former’s India visit, laying the red carpet for his ‘pal’? It seems Modi’s bear hug did not work at all.

Here are five reasons I believe could have influenced Obama in saying what he said.

A shocking incident in the town of Godhra in which 59 Hindus, mostly pilgrims returning from Ayodhya, were burnt alive by a Muslim mob, triggered anti-Muslim riots in Gujarat which left more than 1,000 people, mostly Muslims, dead right under the nose of the then Chief Minister Narendra Modi.

So much so that the Supreme Court of India once likened Modi to Nero, the emperor who fiddled while Rome burned. PM Modi’s close aide Maya Kodnani was convicted and sent to jail for 28 years. Modi, however, denies any wrongdoing.

In fact, when Modi was asked by Reuters in an interview in 2013 if he felt any regret for what happened in 2002, he replied by comparing his feelings to the occupant of a car involved in an accident, saying,

“If someone else is driving a car and we’re sitting behind, even then if a puppy comes under the wheel, will it be painful or not? Of course it is. If I’m a chief minister or not, I’m a human being. If something bad happens anywhere, it is natural to be sad.”

Obama must have read this interview.

When Vikaspuri’s Our Lady of Graces Church was vandalised early in the morning on January 14, 2015, it was the fourth such attack in the recent past in Delhi. Delhi’s Archbishop alleged a clear pattern was emerging in the attacks.

“One person came on a scooter, broke the glass, then returned a minute later and toppled the statue,” Father Balraj said.

Earlier this month, a minor fire was reported from a church in Rohini in Delhi. According to reports, the Christmas crib placed outside the building was completely charred.

On December 2, 2014, a church in East Delhi’s Dilshad Garden area, namely the St Sebastian’s Church, was burnt down in a fire. Police say it was a case of arson, for a forensic team found traces of kerosene inside the church premises. Archbishop Anil JT Couto said,

“A clear pattern of orchestrated attacks is emerging as more and more churches are targeted, vandalised and set on fire. This is very disturbing and we request the authorities to take adequate measures to bring to book the miscreants who are threatening to weaken the social fabric of this great nation.”

Obama must have been apprised of these incidents. The US is a Christian majority nation.

I am pretty sure Obama did not miss this.

Talking through one’s hat and making offensive statements isn’t an aberration anymore with Indian politicians. Apparently, it has become the norm of late, especially during this regime. I wish our leaders instead of running their mouths, not opened them at all.

For instance, senior BJP leader and Union Minister Niranjan Jyoti caused a hullabaloo by using expletives in an election speech in Delhi.

“The people of Delhi have to decide if they want a government of Ramzaadon (descendants of Ram) or haramzaadon (those who are illegitimately born).”

PM Modi refused to sack her.

Another BJP leader Sakshi Maharaj believes that Gandhi’s murderer Nathuram Godse was a “patriot”. He was also not punished.

Benighted fellows of RSS and Hindu brigade have coined the term ‘love jihad’ and their eyes these days are firmly fixated on Bollywood. Days after a morphed image of Kareena Kapoor with her face half-covered with a veil was used as the cover photo of Vishwa Hindu Parishad’s (VHP) magazine Himalaya Dhwani, they have fired their latest salvo on the Khans of Bollywood.

In an editorial in its weekly publication, Hindu Sabha Varta, the Hindu Mahasabha has challenged Shahrukh Khan, Amir Khan and Saif Ali Khan to convert to Hinduism if they really love their wives.

Munna Kumar Singh, the editor and publisher of the weekly, told The Hindu,

“It is our challenge to these Khans of Bollywood if they actually love their wives then they should also try to convert to Hinduism and adopt their religion and culture.”

Mr Singh alleged that there existed a conspiracy against Hindus and the Hindu country. According to him, Sharmila Tagore, Kareena Kapoor, Gauri, Kiran Rao, Rina Dutt and Gauri Chhibbar are all victims of ‘love jihad’.

I would not take these people seriously, but the fact is that there is a government at the centre which is more than sympathetic to their cause. What are they going to do next? Will they ask the Khans to leave their own country?

Obama must have also taken a notice of this and thus he mentioned Shah Rukh Khan in his speech.

He said India will remain unified,

“When all Indians, whatever your faith, go to the movies and applaud actors like Shah Rukh Khan. And when you celebrate athletes like Milkha Singh or Mary Kom.”

Are you listening, RSS?

RSS believes most of the Muslims and Christians living in India today were once Hindus and thus they have every right to reconvert them to Hinduism. Several ‘ghar wapsi’ ceremonies have been conducted in Uttar Pradesh in the past few months in this regard.

But first such incident has been reported from West Bengal. According to reports, as many as 100 tribal Christians were allegedly converted to Hinduism in West Bengal’s Birbhum district on Wednesday. The ghar wapsi was allegedly conducted by VHP. VHP leaders claimed that the adivasis were originally Hindu by faith but were enticed by the Christian missionaries using money. They have been using the same tactics in other parts of the country as well.

How could Obama have ignored these shenanigans of Sangh Pariwar? The US is not ignorant of the aggressive agenda being pursued by these iniquitous fellows who want to make India a Hindu Rashtra where people of other faiths will not be able to live a life of dignity. In other words, they will be treated as second-class citizens. In this manner, Modi’s India can become rich, but not great. For the greatness of a nation cannot be not measured by its GDP or how many weapons it possesses or how many glittering skyscrapers it can boast of.

We ought to respect each other for what we are. A Muslim deserves a life of dignity as much as a Hindu or Sikh does, for, after all, ‘they are no children of a lesser God, and we are all beautiful flowers from the same garden branches of the same majestic tree’. We all are human beings who have hands, bodily organs, a human shape, five senses, feelings and passions. Aren’t we?

And Sir, if being in power means you cannot treat our minorities well, you do not have my respect. You will not have the world’s respect. At least listen to Obama and spare us the horror.