Did America make a bigger deal about Michelle Obama being unveiled than Saudi? 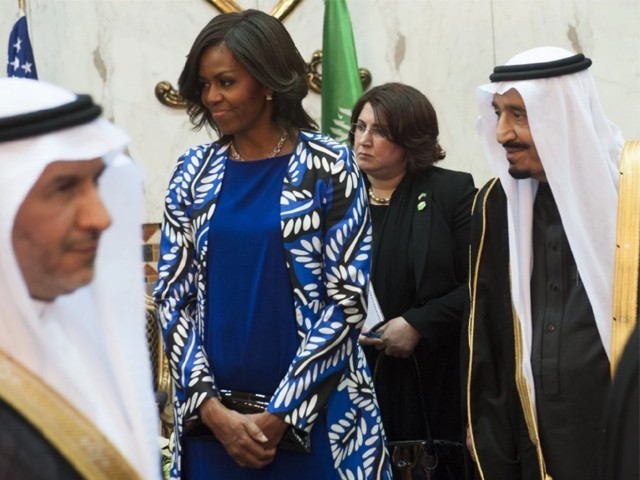 Saudi Arabia's King Salman, right, and Michelle Obama, center, hold a receiving line for delegation members at the Erga Palace in the capital of Riyadh on Tuesday. PHOTO: AFP

International media may have you believe that the Saudis are marching through Jeddah with pitchforks over the sight of Mrs Obama’s undraped head. A closer inspection of social media trends, however, suggests shrewd political theatre.

A few days ago, major news networks broke the story of a strong “backlash” in the wake of a friendly visit to Saudi Arabia by the First Lady and her dupatta-less head.

Personalities as politically charged as the ‘Leader of the Free World’ and his wife, do not make sartorial gaffes, or obvious cultural faux pas. It may seem almost comical to imagine the White House having a whole legion of agents and associates whose job is inspecting the height of the shoes that the FLOTUS (First Lady of the United States) is meant to wear to the State Gala, or watching out for loose threads erupting from the President’s coat, but they probably do. PR is something the White House takes very seriously, as it should.

Michelle Obama, after all, is the same woman who received more news coverage for her bangs in January 2013, and later when she ditched them in August, than what any crisis in Nigeria could ever hope to achieve. Her toned arms are idolised by fitness magazines, and her dresses are of keen interest to American fashionistas.

It is highly probable that someone on Team Obama had done his research, and figured out that the Saudis like their women keeping their heads covered. I don’t believe the Kingdom’s legendary conservatism has ever been a secret.

There’s probably something else Team Obama probably caught on.

The world’s patience for human rights violations in Saudi Arabia may be at its thinnest yet. Strong protests are raging around the world over the flogging of an innocent blogger, videos of public beheadings in Jeddah are going viral, and diplomatic cables showing King Abdullah prodding US to invade Iran are getting leaked.

The world – and more pressingly, the Americans – are getting increasingly restless, and are narrowing their eyes on the grand Saudi-American friendship; especially so, after the US has officially rolled out the kindest words for the deceased Saudi King.

Naturally, a stunt was in order to keep the alliance afloat, while delivering a hint of chutzpah to remind the world that Americans make no compromises on their cultural and moral principles.

According to BBC, the Arabic hashtag on Twitter dedicated to berating Michelle Obama for her insensitivity, was tweeted only 2,500 times – many of which have only been used sarcastically to ridicule the negative reaction. Only 37% of the tweets using the “Michelle Obama unveiled” tag actually originated from Saudi Arabia.

In fact, the tag was almost entirely overshadowed by a second trending issue: King Salman leaving during Obama’s visit to offer his prayers, gathering over 170,000 messages. The Saudis’ enthusiasm is entirely unsurprising, as they are no strangers to foreign female diplomats’ uncovered heads.

Furthermore, the Saudi officials denied blurring photographs of Michelle Obama, as alleged by some media sources. These sources, once again, were basing their reports on the assumption of furore by the conservative Saudis, instead of evidence; a behaviour that frankly borders on racism.

Former First Lady, Laura Bush, visited Saudi Arabia in 2007 without a headscarf or veil, and so did Condoleeza Rice the same year. A scarf-less Nancy Pelocy was welcomed to the country by the imam of Mecca’s grand mosque himself, seemingly unfazed by her attire. Secretary of State, Hillary Clinton, too had the privilege of visiting the Kingdom without head-covering, and without controversy.

Unlike all these women, the wife of the American President now stands unflinchingly as a Maverick, in fearless defiance of the Kingdom’s antiquated customs and oppressive anti-women laws.

Or at least, I think, that is what we are supposed to believe.

I am not implying a conspiracy, but I am hoping that the ‘free world’ is not content with letting the world assume Michelle Obama’s bare head as a symbol of true American defiance, because it isn’t. A much stronger political statement is needed against a regime with an objectively atrocious record of suppressing its people’s freedom.