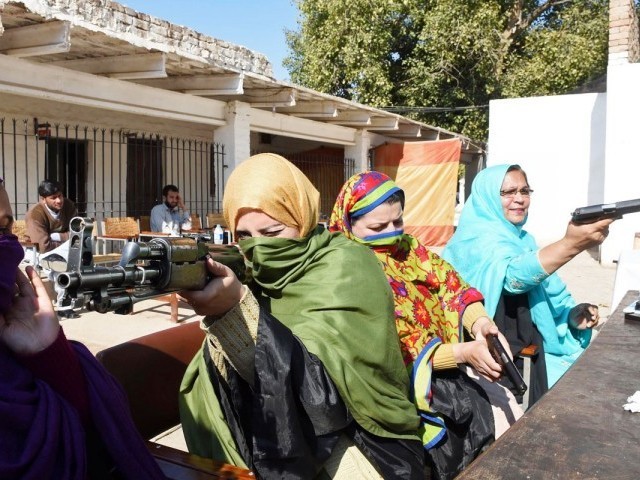 Teachers handle various firearms during a weapons training session for school, college and university teachers at a police training centre in Peshawar on January 27, 2015. PHOTO: AFP

The Khyber-Pakhtunkhwa (K-P) government has finally unleashed its first substantial policy reforms since the Taliban massacre in Peshawar that killed over 130 innocent children. The policy is to allow teachers in the province to carry weapons to engage terrorists.

One wonders how many geniuses it took for the Pakistan Tehreek-e-Insaaf (PTI) government to come up with such a preposterous initiative. The naivety in argument is that there are not enough police officers in the province to provide security to every school. This clearly shows that the government has not yet conceived even the simplest and dangerous consequences that such a move might entail.

The first and foremost question occupying the minds of many is why should teachers be expected to serve as security guards considering the country has a huge defence budget, the fourth largest standing army in the world, scores of intelligence agencies, police, rangers and paramilitary forces? After all, their job is not to act as a counter-terror force but to teach the students.

Secondly, did it cross the authorities’ minds that what happens if even a single of these armed teachers turn in favour of the Taiban? Who will guarantee that this will not happen? In fact, the mess that we stand in today is because we thought by arming and pumping the Taliban during the Soviet invasion of Afghanistan and afterwards, we will always maintain them as our surrogates. Look how that turned out. Today, with the same weapon, they have killed more than 50,000 innocent Pakistanis.

Thirdly, in our country where not only madrassas but also public and private schools are tailored to encourage Taliban’s views through curriculum that teaches children ‘A’ for Allah, ‘B’ for bandookh (gun) and ‘J’ for jihad. What impact will a teacher holding a gun in the class have on the children? The same teachers who students look up to, who shape our society by imparting good values into our children. What lessons are our children learning when they are being taught by a teacher with a book in one hand and a gun in the other? Does the government realise the extent of psychological and negative impact of this policy on our children, the future generation?

Fourthly, will the children feel safer by having people with loaded guns around? What arrangements has the government made to ensure that these weapons will not spark bloody accidents on campuses, in colleges and universities?

By any definition, the idea of arming teachers is not only inappropriate but dangerously insane too. With almost half of Pakistani children, aged between five and 16, not going to schools due to various reasons, and only half of the population being able to read and write, what is required is training and arming our teachers and children with books and pens, not guns.

Today, the success of any country depends on how well it equips and trains its teachers with skills and knowledge necessary for today’s information age, and what future generations learn from them. The frustrated, young, unemployed youth in Pakistan is already at the helm of blandishments of extremists and terrorist ideologies. Introducing a culture of Kalashnikovs in our schools, colleges and universities, is sliding society in further chaos.