If you are an unmarried Pakistani, you cannot visit Sweden 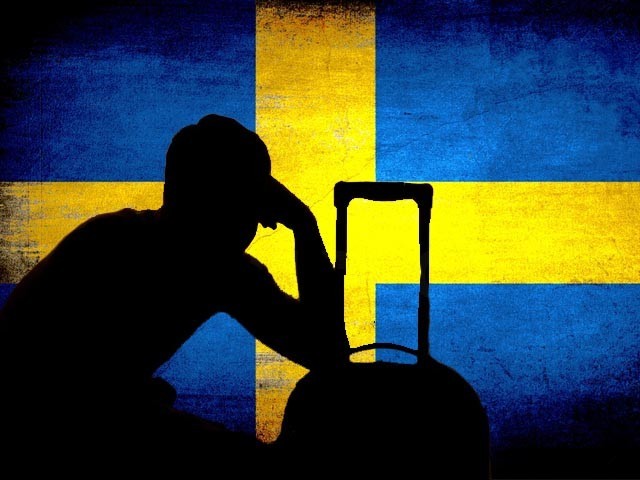 The Pakistani passport is already the third worst in the world and now countries are also banning Pakistanis from even getting a visit visa.

“Sweden will no longer issue visas to Pakistani citizens unless they are visiting a close relative or are married with children.”

Apparently, even ‘tourism’ related purposes are not permitted. Obviously, none of this makes a part of their official press release; they wouldn’t want bad press attention for this racist policy, now would they? This brings me to the purpose of my blog today.

I have had many Swedish friends for years and one of them visited me in Lahore, Pakistan, in December 2013. He still remembers my mother’s parathay and liked Pakistani food better than most of what he has eaten in his life. I took him to Hafeez Centre, which he was amazed to see and even told me that nothing like it existed in the 30 odd countries he had been to in his life.

Now, it was my turn to visit his family. I also wanted to visit Sweden to go to the Dreamhack Festival, a technology event with over 25,000 attendees from all over the world, which takes place only twice a year. It has been my dream to go to this festival since I was 12. So I finally saved up some money to go and my Swedish friend’s mother sent me an invitation letter after which I applied for a visa. I should mention here that my application was ‘’exactly’ as requested by the embassy. No documents were missing or incorrectly filled. I triple checked the application before I sent it. I obviously couldn’t think of any reason for which they would deny me a visa. I was so sure that I would get the visa that I even purchased my return ticket. This was to be my first trip out of Pakistan and I was excited like never before.

A few days later, I received a text message from the embassy, asking me to pick up my documents and I went there as fast as I could. But when I got there, I was extremely surprised to see that my application had been rejected. I came home, sad and depressed, and started reading through the rejection letter. They had provided two main reasons for rejecting my visa, both of which made no sense at all.

“Your invitation letter mentions that you will be paying for your stay in Sweden yourself, however you have attached no bank statements to support this.”

Nowhere did I mention that I will be paying for my stay myself. It said that the person inviting me will sponsor my stay and the past six months of bank statements had, in fact, been attached to my form.

“Your reason to return to Pakistan could not be ascertained.”

For this, as a visa requirement, they had asked to show a return ticket booking or money enough to be able to buy a return ticket. I attached an actual, fully paid for, return ticket. This is more than the requirements of the visa application. Secondly, I am 17-years-old. My family, home, friends and school are all here in Pakistan. I had no reason to stay longer than the visa permitted.

So I called the embassy right away and was greeted by an exceedingly rude lady on the other end. I mustered a calm and polite tone in my voice and asked her if I were to apply again, what additional documents were required. To this she responded in a rather curt tone,

“You should send the same application.”

I then inquired about how it would be different from my first application considering that one got rejected. To this, she answered,

“Maybe the person who checked your application didn’t like it; maybe it will go through next time.”

At this point I really wanted to give them a piece of mind and say,

“Was it a toffee that he didn’t like it very much so he said no? What kind of an answer is that? The person who read your application did not like it, really?”

Instead, I politely thanked her for her help and hung up.

I went ahead and appealed the decision. This appeal is checked by people in Sweden in the ‘Migration Court’, so I had hoped that they would see that I was being wrongly refused. I still had a tad bit of hope left about getting the visa.

A month and a half later, I received a letter from the migration court in Sweden. I opened it up and started reading it. It said that I should attach documents such as real estate documents, proof of employment, return ticket etcetera.

I am 17-years-old, I do not own real estate or have employment.

This is not mentioned anywhere as visa requirements for any country, let alone Sweden. You just don’t ask a 17-year-old for real estate documents or proof of employment. And yes, it was quite clear that I was being asked for my documents, not those belonging to my parents’ or family which would have made more sense. I had already attached a return ticket, so I was not sure why I was asked for it again.

This was quite confusing to me so, I started emailing the Migration Board of Sweden that provides information on visas. They told me that I should attach “evidence that I will return”. When I asked what evidence should be attached, their answer was,

“We cannot confirm what evidence.”

I then asked why I was told to send real estate documents because I am only 17-years-old. Their answer was,

“If you do not have real estate then you should not attach such documents.”

“Then what should I attach?”

“We cannot exactly confirm that.”

After two weeks of this, I was fed up. I was asking simple questions and getting no real answers. So instead of emailing them, I decided to post my story on a Swedish forum where people come to get help about visa related information. Many people tried to offer help, saying that I should attach a letter from my school and that I should give extra documents to prove that I will return. A couple days later, an actual case officer who happened to work for the migration board replied:

“In 2014, 370 Pakistani citizens applied for asylum in Sweden. Hence, entry visas are only granted to Pakistanis who wish to visit immediate family members in Sweden and who can show that they are established in Pakistani society. Being established means having a family (husband, wife, children) in Pakistan to return to and/or to be established in the labour market. It is unlikely that any Pakistani will be issued a visa to visit a more distant relative or friends or to visit Sweden as a tourist.”

Basically, in other words or as I took it, he meant:

“Because 370 Pakistanis out of 182 million did something wrong, we are now banning all Pakistanis who are not married with children or have a close relative in Sweden. No tourism for you Pakistanis either. Too bad you were born in the wrong place.”

This proved that all the reasons I was being given by the embassy were made up to hide the real truth – I am not being given a visa because I am an unmarried Pakistani. The Pakistani passport is already the third worst in the world and now countries are also banning Pakistanis from getting visit visas. I can’t say Sweden is completely unjustified in doing this but maybe a better way would have been to have a more thorough process instead of completely banning a country, where many innocents, like myself, with no illegal intent also suffer for mistakes made by other people. I had to pay for a mistake I did not make. A deed that 370 Pakistanis committed. Only because I am also a Pakistani.

On the other hand, a friend of mine who was planning to go with me, who is also as Pakistani as it gets but was born in Canada and has Canadian citizenship, can go to Sweden any time, without even needing a visa. It is kind of ironic how the place you are born in has such an effect on your life.

In the end, after a long time of saving up money, making plans and getting excited, I was not given a visa because I was born in the wrong country. And a sad realisation dawned upon me, and a bleak realisation dawned on me; being a Pakistani automatically means I am a lesser human being. And this is how my childhood dream came to an end.

The author is a 17-year-old A Levels student living in Lahore. He enjoys computer science, cricket and computer games.