If you limit freedom of expression, is it still a freedom? 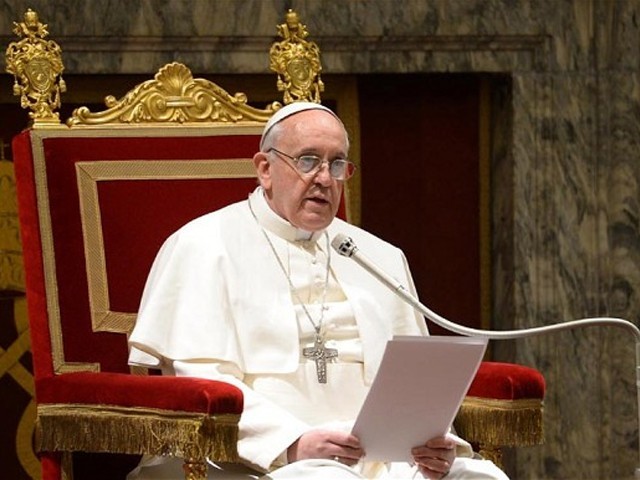 Pope Francis delivering a speech during a meeting of the world's cardinals. PHOTO: AFP

Pope Francis is a man to be admired. Since taking the Papacy in March 2013 and shedding the traditional gold, the Argentinian pope has won hearts across the globe with his wisdom, humbleness and what seems to be an earnest attempt to create a better understanding between cultures and religions.

As the face of the Catholic Church, Pope Francis has often released prudent statements after controversial events that, at the very least, are received with quiet acceptance. Such is the pragmatic nature of Pope Francis that one can imagine that even those chastised by him take a moment to uncomfortably stare at their shoes as they lower their heads with feelings of guilt.

The recent al Qaeda attack at Charlie Hebdo in France has certainly sparked a debate on the subject of freedom of expression. Here too, the good Pope has weighed in. Although the Vatican has clarified that nothing justifies the attacks, Pope Francis has stated that there should be boundaries on the freedom of speech,

“There is a limit. Every religion has its dignity. In freedom of expression there are limits.”

Speaking of his friend Alberto Gasbarri, who happened to be standing next to him at the time, Pope Francis went on to say in a light-hearted manner,

“If my good friend Doctor Gasparri (who organises the Pope’s trips) speaks badly of my mother, he can expect to get punched,” he said, throwing a pretend punch at the doctor, who was standing beside him.

While I appreciate his sentiments, the counter argument here is, if you are going to limit the freedom of speech with a shackle, no matter how loose, it no longer remains a freedom.

As I stated in an earlier blog, the beauty of freedom of speech is that as an ideal, it fosters advancement in every facet of human expression. Unshackled, exceptional members of mankind are free to soar, and free to debate anything.

There is something holy to everyone in the world. Any advancement mankind has made has been offensive to at least one person, and you can’t limit these freedoms of human expression if those offended are many and wield sticks and stones rather than words.

If the only downside to this is that certain members will misuse this freedom to hurt the feelings of others, then it must be taken as an unfortunate side effect. While anyone has the freedom to say anything they want, you have the freedom to decide not to consume the product of their freedom of expression.

Trying to decide what limitations to place on the freedom of speech is like climbing a very slippery slope. It is as futile as two men with opposing views trying to decide where an eagle they own is allowed to explore. While the first man prefers that their bird not be sent towards the mountains, the other prefers it not to fly into the woods. Each limitation is respectively important to each man, and each limitation limits the vital information the two can gain about their geographical surroundings. Rather than keeping the pet sulking at home, why not allow it to travel to both locations? Perhaps the eagle will be more at risk during this task but it is better than the alternative of living in ignorance.

On the subject of religion, keep in mind that every religion is holy and perfect to the person who follows it. Take Scientology for example. I think this religion is completely absurd. I can say this because Scientology followers aren’t likely to raid my office and kill me and several of my friends. The benefit of being able to openly criticise Scientology is that the religion will be kept in check and grow only through legitimate means, and will think twice before adopting questionable ideals. Whether any ideal is questionable is not up to any one man, but to society in general through debate. This is not only beneficial for the world, but the religion of Scientology itself.

Consider how many questionable decisions have been made in the name of religion throughout history. Yes, these questionable decisions were only made because they couldn’t be questioned. At this moment in time, the Islamic State of Iraq and Syria (ISIS) remains unchallenged by those under its rule because it controls the freedom of expression with a tight fist. Tomorrow ISIS could rule that all of its followers must wear pink bunny rabbit ears and hop around the battlefield, and its territory would look like it was celebrating a very violent version of Easter.

The problem with curtailing freedom of expression is that no one deserves the supreme power of making this decision. History has shown that those in charge of setting the bar have placed these limitations in line with their own beliefs and agendas. There is no one with the morale authority to create such boundaries, not even the pope. The only morale boundary is to have no boundaries at all.