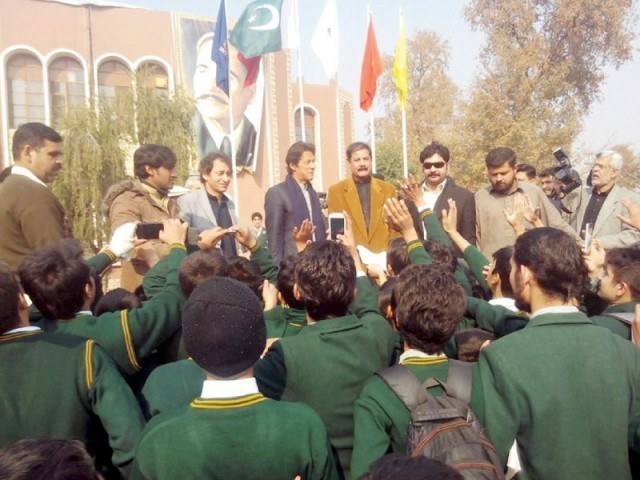 People still have a soft corner for you, sir – even when you appeared to put your personal happiness before their sorrow. PHOTO: EXPRESS

You know you have done something very, very wrong when distraught, infuriated parents who have lost their children can still find the strength to tell you they don’t appreciate your show of solidarity.

That was exactly the public embarrassment that Pakistan Tehreek-e-Insaf (PTI) Chief Imran Khan had to face when he bothered to show up at the reopened Army Public School, Peshawar – the scene of a heinous attack that killed over 130 children and shocked the nation last month.

I hope that Imran Sahib and the PTI leadership uses this as a wake-up call that they have kept this nation, their own voters, waiting for far too long. Here are some key lessons that they can learn from today’s protests.

1. Imran’s point that the attacked school is run by the army who is thus responsible for its security is completely valid. However, the students who attend that school and their parents are first and foremost Pakistani citizens who live in Peshawar, the capital of the province that PTI won by a huge mandate, which does rest some responsibility squarely on the administration’s shoulders.

When people vote for you or your party so overwhelmingly, they expect you to advocate for them. They believe that you will work towards improving their lives and speak out for their welfare. In a situation like this, making statements such as “we didn’t run it so it wasn’t our responsibility” appears to be attempts to shirk responsibility instead of showing resolve to take the fight head on.

2. People still have a soft corner for you, sir – even when you appeared to put your personal happiness before their sorrow. Even when you and your party leaders disappointed them by not showing up at the school even once in the month between the attack and the school’s reopening. Even when you chose to shift your focus and your energies back on your demands of alleged rigging barely a month since the attack. Even when you ideologically aligned yourself with parties that apologise for the murderers of their treasure, and when sometimes you did it too.

This is a huge responsibility, Imran Sahib, one that you have borne since you became this nation’s beloved by leading its cricket team to an unlikely win at the World Cup of 1992. You cannot fail us now; this nation, even those who vehemently disagree with your politics, still refuses to give up on you.

3. Winning an election is tricky business. When your people are hurt and scared, when they have lost everything they lived their lives for, they don’t care about rationales about who is responsible. Everyone is responsible, because everyone disappointed them and everyone failed to protest their children. So even in times when you feel your hands were tied, you will be held responsible because you are the people’s representative.

Also, remember that the lines you use can also be used against you – especially when they sound suspiciously like the ones used by “status quo” politicians, many of which found space in your speech after the APS protests.

4. Are public schools any better secured? At this point, you can sort of get away with it by putting all the blame on the army’s shoulders. But if in the future, God forbid, a public school were to come under attack, are you prepared? You are right in stating that the government cannot provide security to 65,000 schools across the province, so then should Peshawar’s students and citizens stop expecting that the administration will at least try to secure them?

This was an army-run school, what about the ones run by private individuals or organisations? Should they interpret this to mean they are on their own since those who run the school are the ones solely responsible for its security? Make your chief minister do his job to the best of his ability, instead of showing him a way out by making irresponsible statements such as these.

5. Don’t throw away these votes for the ones that you didn’t get due to rigging or otherwise. This nation, especially the voters in the areas you won, came out to vote despite immense threats, with terrorism one of the biggest. You and your party must get off its campaign trail now and singularly focus all you’ve got on governing for those who did vote for you.

Those who didn’t, or those whose was robbed, give them another chance with compelling reasons to vote for you. Your Naya Pakistan, sir? Show, don’t tell. Make it happen, and see the logical conclusion that this nation takes the movement you started.

Why Chambaili is a must watch