And in other news, John Kerry eats doughnuts… 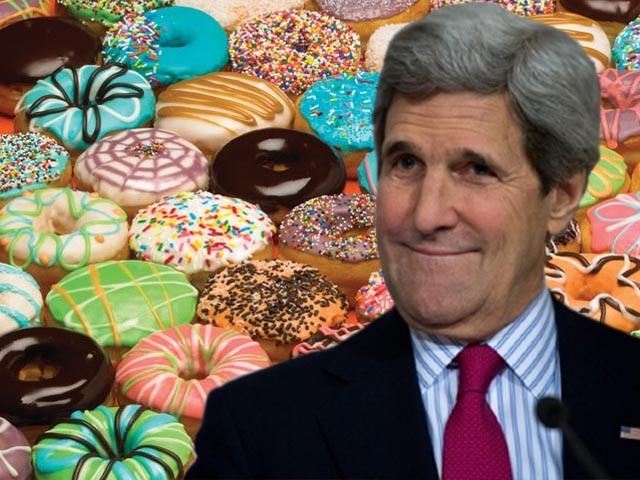 The tweet says it all, we have managed to please the US. PHOTO: AFP

From discussing Reham Khan’s wedding dress and their possible honeymoon destination, to talking about every little detail one can possibly discuss about a wedding, our media has moved on to more mature current affairs.

US Sectary of State John Kerry ate a doughnut.

He did not just eat a doughnut, he ate a doughnut in Islamabad.

There is a difference in the above two statements because the latter is crucial to Pak-US relations and strategic dialogue.

A little slice of home here in #Islamabad: @DunkinDonuts to start the day. pic.twitter.com/IOo0wlemTD

However, the major question on all our minds right now is, did he eat doughnuts in India?

We, as a nation and an enthusiastic online community, have reacted to this ground-breaking news with emotion and genuine concern for our country’s foreign affairs.

Here are some of our most pressing concerns:

John Kerry wanted donuts in Pakistan and got them, while Papa has to carry lunch boxes full of Nihari for his foreign tours #YeKesaInsafHai

I feel you, Maryam. Really I do.

This next gentleman underestimated the Pakistani media:

J.kerry eating dunkin donuts,I hope this makes the bulletin at 9,other wise I'll lose faith in our news channels

Well Sir, what do you have to say for yourself now?

Seems nothing Pakistani sits well with Yank ldrs – its a disease going beyond "do more" mantra & led Kerry 2 stodgy Dunkin Donuts in Isl!

Did Kerry have the boston creeme or the glazed donut in Islamabad today? The world needs to know!!

Have been told that take a copy of this pic to your nearest Dunkin Donuts and they will pay your US visa fee pic.twitter.com/b5LDd4awDu

Aloha, You Ess of AYYYE! Here we come!!

Actually culturally savvy on kerry's part because many, many stateside dunkin donuts are owned or operated by desis pic.twitter.com/QlAFfNCwDB

Kerry tweets from a Dunkin' Donuts in Islamabad. US pleased with efforts by #Pakistan #foxnewsfacts #ParisMarch #PeshawarAttack

The last tweet says it all, we have managed to please the US.

In light of this news, if Obama decides to visit Pakistan, PM Nawaz Sharif can proudly claim,

“In your face, Modi! My doughnuts bring all the boys to the yard, damn right they’re better than yours!”