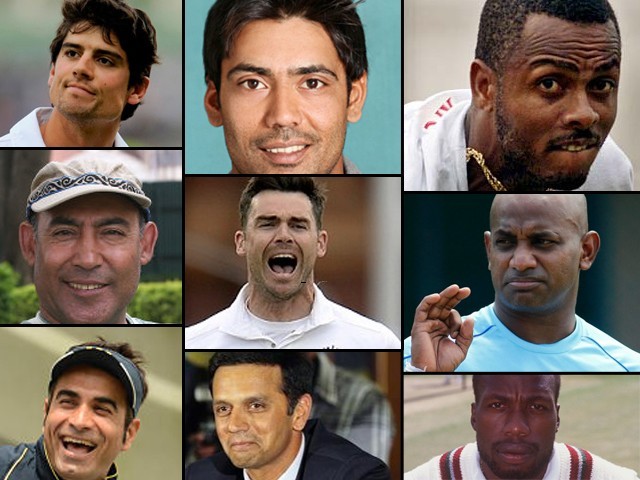 While we remember the positive records and remembers players for their progressive achievements, we should also keep in mind the less highlighted records.

Abdur Rehman, an experienced Pakistani left-arm spinner, was barred from bowling in the Asia Cup match against Bangladesh last year after he bowled three consecutive high full-tosses. After the third one, Umpire Johan Cloete suspended him from bowling and he finished with figures of 0-0-8-0, which was a new record.

Abdur Rehman, for sure, was not happy after registering his name in the record book but there are some other big names of the cricketing world that have made records which they are not proud of.

Undoubtedly, playing against Sanath Jayasuriya in the mid-90s was nothing less than a nightmare for most bowlers. But while Jayasuria holds the record for one the fastest ODI 50 on just 17 balls, this is not his only record. He also has the record for most ducks, 34, in ODIs to his name. Surprisingly, the man next to him is Shahid Afridi, who scored the fastest ODI century on just 37 balls, with 30 ducks. The third in the row is legendary, Wasim Akram, with 28 ducks.

2. Most ducks in Test cricket:

Guess, who is Jayasuriya’s counterpart in Test cricket? Yes, the man with more than 500 Test wickets under his belt; former West Indian pacer Courtney Walsh was bowled 43 times on duck in 185 Test innings. Chris Martin of New Zealand is second with 36 ducks and the great Australian bowler, Glenn McGrath, is third in the row with 35 ducks in 138 innings.

3. Most-times bowled out in Test cricket:

Rahul Dravid, famous for his style and technique, holds the distinction of most-times being bowled in Test cricket with 54 times. He is followed by Australian Alan Border, who has been bowled out 53 times.  Little master, Sachin Tendulkar remained unlucky in being bowled out and falls in the third rank with 48 times.

4. Most expensive over in test cricket:

King of swing, Wasim Akram, is of the view that Jimmy Anderson is the better bowler but Burewala Express, Waqar Younis, favours Dale Steyn. However, Wasim’s opinion came into question after the last Ashes trophy matches took place.

Though Anderson could not inflict any real damage to the Australian batting line, he remained successful at bowling the most expensive over of Test cricket history, when George Bailey scored 28 runs in Perth against him. Robin Peterson of South Africa shares the record with Anderson.

Surprisingly, Peterson also conceded 35 runs in an ODI over against Thisara Perera, the Sri Lankan striker. He is second after Van Bunge of Holland who conceded six sixes on six balls – against Herschelle Gibbs.

5. Most no-balls and longest over in Test cricket:

Curtly Ambrose was undoubtedly the most fearsome bowler of the 90s. The big man, who captured over 400 wickets in Tests, bowled the longest 15-ball over containing record nine no-balls. The match was played in Perth in February 1993. Despite Ambrose’s errors in the first innings, West Indies won the match by 10 wickets and Ambrose was player of the match with a five-wicket haul.

6. Longest over in an ODI match

Muhammad Sami, the only bowler who made hat-tricks in all formats (T20 hat-trick in BPL) of the game, bowled a 17-ball over against Bangladesh containing seven wides and four no balls in Asia Cup 2004. It was the third over of the match while Sami’s first over was wicket maiden. It is the longest over so far in the 50-over format.

7. Most runs conceded in Test with no wicket

Imran Tahir, who was born in Pakistan but played for South Africa, has the worst bowling figures in Test cricket. In Adelaide Test, 2012, against Australia, he bowled 37-overs and conceded 267 runs without any wicket. Second to him is Khan Muhammad of Pakistan with 259 runs in 54-overs without any wicket against West Indies in 1958.

While Corey Anderson recently broke Boom Boom’s record of the fastest ODI century after 17 years, Mudassar Nazar of Pakistan still holds the record of slowest century in Test cricket. In 1977-78, he completed his century in record 557 minutes at Lahore against England.

Playing a 100 Test matches is itself a milestone but making the century Test memorable is exceptional. English skipper Alastair Cook is the only batsman of this special club with a golden duck in his 100th Test. Surprisingly, in his 99 previous Tests, Cook was never out on the first ball. But, in the second inning of his 100th Test played at Perth, he collected his first ever golden duck.

While we remember the positive records and remembers players for their progressive achievements, we should also keep in mind the less highlighted records. They too, after all, required hard work, albeit of a negative nature.