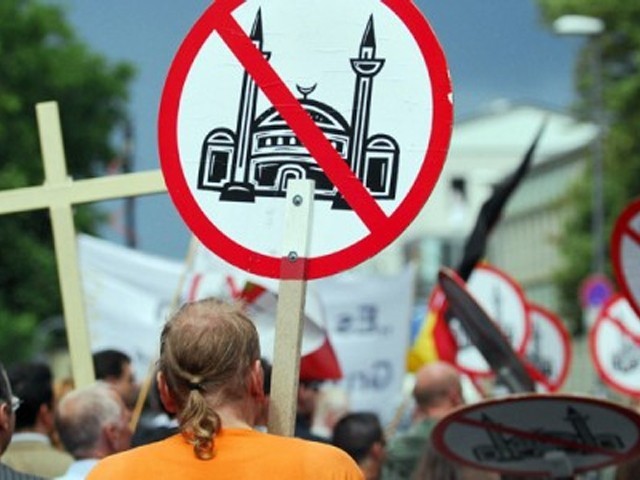 Members of the Pro Cologne party protest the plans to build a mosque in Cologne, Germany. PHOTO: AFP

There is no such thing as racism in Germany. Or at least in theory, there isn’t. After the Second World War, Berlin was reduced to rubble by the Allied Forces, revealing the horrors of the Holocaust that Nazism left behind. At the time, the question, “how did we let this happen?” was never fully answered.

The Allies and the Soviet were too busy contemplating the future of Germany. The issue of intolerance and racism was never really dealt with but was rather suppressed deep within the sub-conscience of the Nazi apologists. And overnight, anti-Semitism became unfashionable. But looking back after 70 years, the xenophobia of the minority of Germans still lingers on in different forms and shape.

On January 5, 2015, the country’s largest “anti-Islam” PEGIDA protest took place in the city of Dresden with a record number of 18,000 people. This was not a joke anymore; this was now something that the liberals could not ignore. It might be slowly becoming a force to be reckoned with.

But what exactly is PEGIDA and what does it stands for?

Just like any other nation, German politics can essentially be divided into two fractions – the Liberals and the Conservatives. The Liberals includes left-wing parties as SPD (Sozialdemokratische Partei Deutschlands), Die Linke (a collection of leftover political parties from the Communist era) and an internet-based political party, Die Piratenpartei. The Conservatives include CDU (Christlich Demokratische Union Deutschlands), led by Chancellor Angela Merkel.

But in recent history, the far right-wing political parties such as Nationaldemokratiche Partei Deutschland (NDP) and Alternative für Deutschland (AfD) are now making their voices heard at parliament. They demand the “German people” to be their utmost priority. Borrowing the phrase from the reunification era “Wir sind ein Volk” (We are one people), they aim to cleanse Germany from “foreign culture”, decreasing the amount of immigrants and encouraging xenophobic values in the German society (hence their slogan “Maria statt Scharia!” (Maria instead of Sharia).

PEDIGA is a political movement that, more or less, flirts with the principles of these extreme right-wing parties. Its leader, Lutz Bachmann, started this movement as a tool to fight against the PKK (Kurdistan Workers’ Party) and their shipment of weaponry. Lutz fancies a well groomed beard, has been arrested in the past for the possession of cocaine, drunk driving, burglary and fled to South Africa to avoid the German justice system. But what started off as a Facebook page in October 2014 has now slowly grown in popularity amongst the extreme conservatives. Arguably, for a minority of Germans, this political movement speaks for them which they have been afraid to say openly against Ausländer (foreigners) for a long period of time without being labelled as “Nazis“. Or at least that’s what they claim not to be.

On December 18, 2014, local German news channel ARD conducted interviews with the PEGIDA protestors. Almost every protester began their argument with,

The PEGIDA members are also keen on not speaking to the local press as they consider them to be “Lügenpresse” (liar press). Many young protesters, aged between 20 and 35, were hesitant speaking about the uncomfortable feeling that they have around Ausländer, particularly Turkish or those with Muslim roots, while the senior citizens spoke openly, demanding the expulsion of Muslims from Europe and better pension plan for the ‘true Germans’. One female protester admitted that observing mosques being built around her home city makes her feel incredibly uncomfortable as she would not like to spend Christmas “in a mosque in the near future”.

As interested as I am in politics and human behaviour, I asked every liberal and non-liberal German for their point of view about this political movement. Some are saddened at the way things are progressing in Germany while others still refuse to take them seriously. With a unworried wave of their hand, they proclaim,

While sharing a cup of coffee with an elderly German actor, who coincidently comes from Dresden, I diverted the topic towards the recent PEGIDA movement. With a bit of hesitation, he told me that while not being a member, he still felt some form of sympathy towards the movement. He argued,

“But you should not fear as PEGIDA is only against Muslim extremists and not against well-spoken and articulate Muslims such as yourself.”

Of course, many Europeans now fear that once “Muslim extremism” enters, the law of Sharia is soon to follow. The recent Charlie Hebdo attack escalated this mind-set to a whole new level. To them, the laws of Islam seem incompatible with the European lifestyle.

But after all this, the members of PEGIDA still disassociate themselves from Nazism and any form of racism or discrimination. The first sentence of their “Constitution” on Facebook reads:

(PEGIDA is for the admission of war refugees and political or religious persecution. This is a duty men owe!)

Ironically, nowhere in their constitution do they specifically mention the word ‘Islam’ although the word “Sharia” is mentioned and integration with Muslims is discouraged, while supporting ‘Christian/ Jewish’ dominated culture. They also stand against immigration, particularly the Muslim population, but support war refugees in their homeland. After scuffling through their list of ideas, the last sentence of their “Constitution” seemed, to me, a bit puzzling:

(PEGIDA is against preachers of hate, no matter what religion they belong to!)

But the movement itself spells acrimony and expulsion of Islam or Muslims from their vision of Germany. Does that not qualify as “hate preaching”?

For my social curiosity, I decided to give PEGIDA the benefit of the doubt and not trust the “Lügenpresse” for now. I wanted the members to speak for themselves. So I decided to add myself to their closed Facebook group page, the place where it all began. But would they accept me, a non-white male with a Muslim background, as their member?

A day passed without a word but then finally, I was accepted into the group. While browsing through their page, it was filled with nothing but anti-Muslim propaganda, with total of 1,411 group members, majority being white Germans.

But could one reason with these people?

I then decided to write a formal, friendly post, asking the members that instead of hatred, they should join hands in building dialogue between the two worlds and diminish the misunderstandings between us. Here is my post:

And this is the response from the group members:

A day later, the group admin kicked me out of the Facebook group and blocked me from it. Guess I was spreading the vile concept of “dialogue and reason” that they are not very fond of. I laughed off their uninspired slogans of racism and bigotry. Apparently the PEGIDA members talk not so differently from their right-wing extreme counterparts that they so desperately want to distance themselves from. It is already apparent that you cannot reason with people who withhold racist or bigoted tendencies. I’ve faced such people in Pakistan alone so this was nothing new for me. Such people exist everywhere, in every corner of the earth.

After living in Germany for almost three years, it is arguably, one of the least racially inclined European nations I have ever come across. Many Germans still do remember what the consequences of preaching hate and ignorance can lead to. Whether its prejudice against Muslims, Jews, Gypsies or even homosexuals, they all have a similar way to go about it. But that still doesn’t excuse the fact that the morality of the German people has been flirting with its dark past for quite some time now. With a blink of an eye, 1933 could happen all over again.