What in the world is ‘Love Jihad’, India? 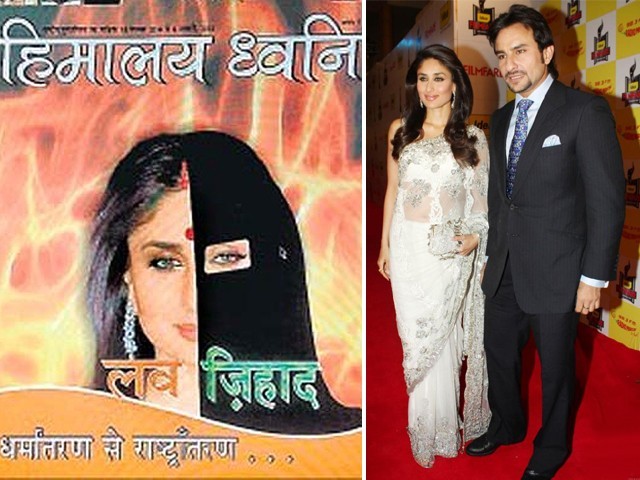 A morphed image of Kareena Kapoor Khan showing her face half-covered with a veil has been used as the cover photo of the latest issue of Himalaya Dhwani, a magazine brought out by the women’s wing of Vishwa Hindu Parishad (VHP) called Durga Vahini.

A few days ago, whilst looking for a flat in Delhi, I approached a broker. With a pleasant smile on his face, the 27-year-old real estate agent ushered me into his two-room office. After I explained my requirements he asked me my name in a serious vein, as though everything depended on my reply.

He paused for a moment and then said laconically,

(We do not rent out to followers of Muhammad (pbuh))

When I enquired about the reason behind this discrimination against a particular community, he refused to elaborate. Feeling ill at ease in the company of such a person, I left the place at once in a huff.

Such are the current state of affairs in India. Sigh!

Moving on to the topic at hand, the recently ascended ‘love jihad’ is one of the most ridiculous concepts I have ever come across in my life heretofore. I mean seriously? For those talking about it, understand the true import of neither love nor jihad. Love is a beautiful feeling that happens between two human beings. In the realm of love, you do not fall for somebody after having ensured that the religion, caste, or nationality of their prospective beau matches their own. You cannot plan for it to happen – it just happens. Those who have been in love will understand where I am coming from. And to the rest, was it all Greek?

Indeed, the term ‘love jihad’ has been coined by ignorant, never-do-well fellows who have, perchance, not yet experienced this emotion. I pity them. The ignoramus cranks allege that Muslim boys are bent on proselytising Hindu girls using the most potent weapon in their quiver – ‘love’. Therefore, these ‘guardians of religion’ wish to create awareness amongst the masses about this ‘serious threat to the very existence of Hinduism’.

In this regard, a morphed image of Kareena Kapoor Khan, Saif Ali Khan’s wife, with her face half-covered with a veil has been used as the cover photo of the latest issue of Himalaya Dhwani, a magazine brought out by the women’s wing of Vishwa Hindu Parishad (VHP) called Durga Vahini. The magazine’s cover reads,

(Conversion of nationality through religious conversion)

Rajini Thukral, the coordinator of the magazine, has reportedly said,

“She (Kareena) is a celebrity. The youth try to emulate celebrities. They think if she can do so, why not us?”

Kareena has not converted to Islam but has added ‘Khan’ to her last name.

Thukral, during an interview with a Hindi publication said,

“The youth is influenced and attracted by people like Kareena, who at the time of her marriage had claimed that she would not embrace Islam and will not drop her surname, but only add ‘Khan’. However, she is seen practicing various Muslim rituals and she is leading a dual life. She should completely embrace Islam for this dual behaviour is affecting the youth.”

Firstly, what an independent woman like Kareena does in her personal life, like who she marries, which religion she follows or does not follow any at all etcetera, should be none of the Hindutva brigade’s business. You are nobody, I mean ‘nobody’ to comment on her personal life.

Alas, women are considered nothing but mere booty to be treated as property in the patriarchal societies of India and Pakistan. According to RSS Chief Mohan Bhagwat, Hindus have lost a lot of maal (property) to other religions over the centuries which they are now seeking to recover.

(We will bring back our brothers who have lost their way. They did not go on their own; they were robbed; tempted into leaving… Now the thief has been caught and the world knows my belongings are with the thief. I will retrieve my belongings. So why is this such a big issue?)

Thukral boasted in his interview,

“16 Hindu women who married Muslim men posing as Hindus have approached us for ghar wapsi. We have already reconverted two. One has also been remarried.”

So how exactly are they retrieving their ‘belongings’?

By using the same tactics which they allege Muslims and Christians had used to convert Hindus? According to a report, it costs around five lakh rupees and two lakh rupees to convert a Muslim and a Christian respectively for RSS. Poor people are lured in with promises of ration cards, cash, jobs and scheduled caste status. They fall for it, for as they say – it’s the economy, stupid.

Moreover, the Bajrang Dal, an offshoot of RSS, is planning to wage its ‘reverse love jihad’ on Muslims and Christians through its ‘bahu lao, beti bachao’ (bring a daughter-in-law, save a daughter) campaign under which they will provide protection to those Hindu boys who get hitched to Muslim and Christian girls. This to me seems like a case of the pot calling the kettle black.

Things have taken a turn for the worse ever since the Modi Sarkar has taken over the reins. From treating minorities as third-class citizens and calling them ‘haramzadon’ (bastards) to unnecessarily waging a sanguinary war on Pakistan, leading to deaths of innocent civilians on the border, this government has shown its true colours sooner than expected. I wonder how one could hate ‘such people’ so much.

It is no courage to kill women and children. They are the worst of India; they want to make everybody like them – killers and haters. But I do not want blood on my hands. They thrive and prosper in the climate of hatred; it acts like oxygen for them. Without it, such outfits would cease to exist.

A Pakistani Facebook friend of mine recently confronted me following the Peshawar massacre and killings of civilians on the border by saying,

“Do you realise you have an evil government?”

“Why did you guys vote for such people?”

I told the Pakistani categorically that I could not be held responsible for the possible evil deeds committed by my government. I did not vote for this government. In fact, I tried my best to stop them in my individual capacity. Now whatever happens between our two countries, we should at least not spoil our personal relations. I wish just once, for once, we could see the people living across the border as fellow human beings and thus realise the worthlessness of this conflict.

As I mentioned earlier, it is a fight between good and evil, love and hate. And in order to win this war, we have to blot out the latter through the power of love. This, I believe, is true love jihad.