Where are all the moderate Muslims? 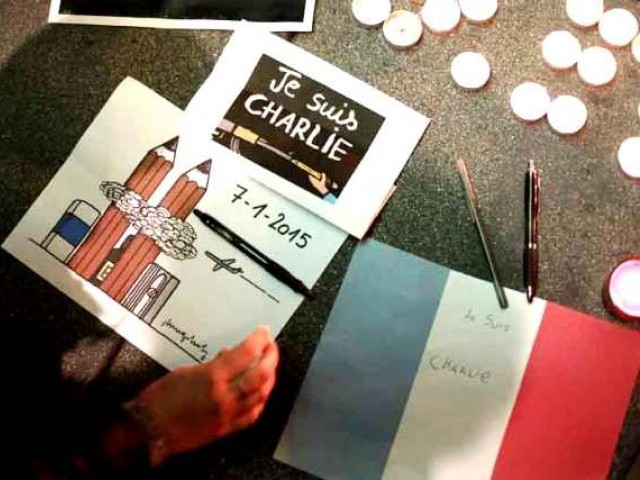 A woman places a drawing and a pen at a makeshift memorial outside the Consulate General of France during a vigil to pay tribute to the victims of an attack on satirical magazine Charlie Hebdo in Paris, in San Francisco, California January 7, 2015. PHOTO: REUTERS

History tells us a story about a woman who used to throw garbage out every morning as the Prophet Muhammad (pbuh) passed by her house.

This was the woman’s practice every morning, the Prophet (pbuh) did not reprimand her neither did he change his route. And then one day, the woman did not appear, the Prophet (pbuh), worried to see the woman missing, knocked on her door and inquired about the woman’s wellbeing. The woman was so overwhelmed by his kindness that it is believed that she converted to Islam.

That was the greatness and humanity of the Prophet Muhammad (pbuh); this is a story that we tell our children when they are impressionable, the question being why? Let me answer the question myself; so they would understand goodness, tolerance, patience and kindness, the four cornerstones of humanity and Islam.

Whoever made the defenders of Islam blood-thirsty barbaric killers? I think it is time the moderates take Islam back from the fanatics, who apparently love the smell of blood. Funnily, tragically or ironically, the mantra of the fanatics seems to be a verse written by the Europeans, it wasn’t right then and it is certainly the most hideous thing now;

Fee-fi-fo-fum, I smell the blood of an Englishman,

Be he live, or be he dead, I’ll grind his bones to make my bread.

The Englishman in the verse can be interpreted as anyone who speaks a language other than that of the fanatics; all minorities in Pakistan, moderate women, men and children, the French or anyone else who dares to disagree.

The Prophet Muhammad (pbuh) does not need defending, he does not need us to avenge him, he is much above that. It is reported that is what the murderers said as they massacred the French journalists.

Is the hard-liners’ faith so fragile that just because someone says or does something other than their belief system, they need to obliterate him? Why are the gatekeepers of Islam in Saudi Arabia not condemning such insane violence, why does the West never hold them accountable for supporting this fanatic brand of Islam? Why?

Fanatic ‘Islam’ has handicapped the real Muslims of the world; we are a population of over 1.2 billion Muslims who believe in actual Islam, a softer Islam, and we have been silenced. Are we not the real defenders of Islam, the majority? Should we not band together and take our faith back? Why are the moderate Muslims not taking offence to the fanatics twisting our faith, how is it that the fanatics have the guns and we have the pens? Is the pen not mightier than the sword?

What is our Islam, what is our Islamic philosophy, is our faith so fragile that it wavers every time someone from another belief system, faith, ideology, mind-set voices an opinion? Do we need a pound of flesh with a whole lot of blood each time someone utters, writes, or draws something that is other than what we think is right?

For the gun trotter, let me assure you that killing someone for an opinion is a sign of weakness. For the moderates, our faith is being hijacked, it is time we take offence and become the real ambassadors and defenders of Islam.

It is time to take Islam back.