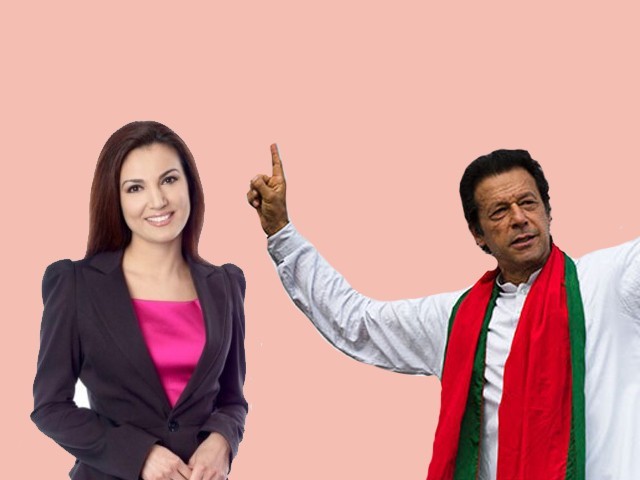 Religious extremism is my priority and therefore so is your marriage

Let me begin this with a disclaimer: I have nothing against Reham Khan. She should not be harassed or have her private space infiltrated. She is free to choose whatever and whoever she wants to. I hope it’s clear; this is not about Reham Khan.

This is about the discrepancy in Imran Khan’s choices.

Imran, like any other right wing politician, exploits the religious sentiments of his voters. We are a nation who as children fall into the trap of our grandma’s religious manipulation,

(The Prophet (PBUH) never refused any type of food; come on, eat your pumpkin like a good child).

And then as adults, when it comes to our marriage, our career decisions, our life style choices, we are controlled by our parent’s Islamic interpretations (which can even be an istekhara). Therefore, finally as voters, who in their right mind will oppose the idea of an Islamic republic; this is the sort of thing which gets you killed here.

So I get it, this is their self-serving, cleverly coated and slyly garnished ‘chooran and chunna’. However, this might have been a benign tactic (not really) in a society which was not as religiously charged as Pakistan, but given Pakistan’s obsession with religious intimidation and oppression, it’s a criminal stance to take.

I use the word ‘criminal’ because of what this mind set has done to us. It has led to Ahmadi persecution, charring of Joseph colony, throwing of a Christian couple in a brick kiln, accusing a child with Down syndrome of blasphemy and finally, punishing a mother of five because of some subjective accusation.

Some might argue that these incidents do not represent what the majority thinks or is capable of doing. Yes, they don’t, but the debate that whether the Peshawar massacre was indeed Islamic, if vigils and black display pictures are the religiously right way to mourn or show grief, and the knee jerk reaction we have to anything remotely progressive, such as stem cell research, is indicative of our collective mind set. Mushtaq Ahmed Yousufi said and I quote,

(In our society, the field of science is often over-shadowed by religion)

We have been led, guided and supported in our choice to regress.

Imran, with his demands for a Shariah state, in his opposition of the women protection bill, through his suggestions of dialogue with the Taliban, by turning a deaf ear to the banning of Malala’s book and the recent school curriculum changes, has made his position quiet clear as a supporter of this regressive, criminal mind set. He consciously, voluntarily and actively made that decision.

I know Imran is no poster boy for religious extremism. His flamboyant past, clean shaven appearance, and that iconic red scarf are anything but ‘Taliban-like’ and this is exactly where the discrepancy kicks in.

What he wants for us and what he chooses for himself are not the same things. He chose a liberal, independent, articulate woman for himself but for the rest of Pakistan, well blue is the colour of the season. Of course don’t get any wrong ideas; I am not talking about Sana Safinaz and Nomi Ansari’s collection. I am talking about those imported blue burqas which the Taliban are bent upon smuggling to Pakistan. Their route: Khyber-Pakhtunkhwa (K-P).

So anyone who says his marriage is personal, or this is just like any other celebrity marriage, is failing to acknowledge the hypocrisy that is at display. Tahir Ashrafi’s drinking is a national concern and masses should be repeatedly reminded of how much and which brand to curtail his religious vitriol. Aamir Liaquat’s ‘behind-the-camera’ videos should be played nonstop till he shuts up and the masses realise that this man fits the bill of a hypocrite as described by Islam (obscene language being one of their traits) and finally, Imran should be questioned about the discrepancy in his “personal” choices and public stance.

You can’t choose to be modern and keep us backward. No sir, your stance and politics has significantly contributed to the mind set which kills and frightens me, so I am not going to let you off the hook easily. My priorities are not misplaced. Religious extremism is my priority and therefore so is your marriage. I am a tweet away from being accused of blasphemy and consequently, of being mercilessly killed or unjustly imprisoned.

My blood is on you.

In the end, as a potential voter, what should we expect in ‘Naya Pakistan’, which has Reham as its first lady? I am hoping the answer is moderation, reforms and progress.