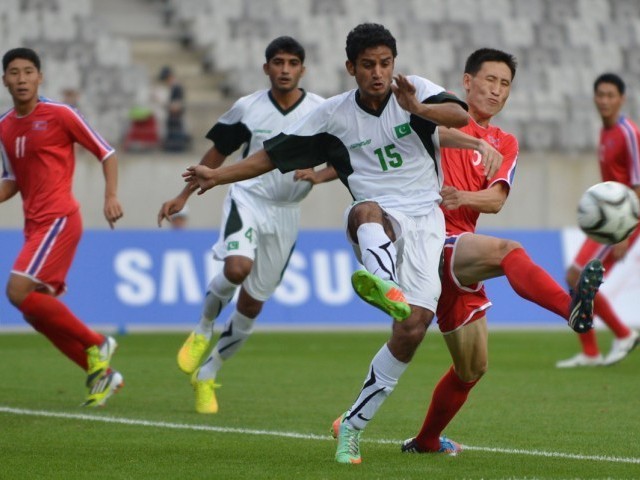 North Korean's Jang Kuk Chol (2nd R) and Pakistan's Mohsin Ali (C) vie for the ball in a men's first round football match at the Hwaseong Sports Complex Main Stadium during the 2014 Asian Games in Incheon on September 18, 2014. PHOTO: AFP

Football, as a sport, has seen an incredible rise in popularity in our country over the last decade. Our shining stars like Kaleemullah, Hassan Bashir, Muhammad Adil and many others have consistently shown that we possess top-class talent. Yet time and time again, Pakistan as a team has failed to deliver on the international stage.

Our football federation sits relaxed, as if everything is under control. It remains undeterred by Pakistan’s dismal performance. We are falling further behind to our neighbouring countries. And let’s be honest, before we dream of making it to the 2022 World Cup in Qatar, we first need to be amongst the best in our continent, or at least better than the likes of Afghanistan, India and even Nepal.

At the start of 2014, Pakistan was ranked 172 in the world. Now we are at 188 and yet the Pakistan Football Federation (PFF) talks about how the national team has excelled under Pakistan’s Bahraini head-coach Mohammad Al Shamlan.

Recently, FIFA announced that PFF will receive a total of $1.3 million (Rs13 crore) this year through various bonuses and allowances.

The question here is what will PFF do with this money?

Of course, it goes without saying that they will make the usual promises of enhancing football facilities in the country. But will they actually do that? Some might also wonder what happened to the money our board received previously. However, I think, right now we need to focus on the present, and think of effective ways to utilise this grant.

Thus, here are some suggestions as to how PFF can make the best out of the money.

We may not have the resources to launch an ISL-alike football league in Pakistan but surely we can do our best to make the most of our national football league. We can encourage entrepreneurs and business executives in our country to invest in our clubs. We can start a whole new campaign to attract reasonable crowds. We can even learn from India on how to promote sports. Allocating necessary budget for high-level advertising can also work.

Our national football team manager has recently stated that any foreign based player willing to make it to the national team squad must attend at least a 10-day-long training camp. By doing this, we are not only discouraging foreign players but also making it clear that we don’t want them. Instead, PFF should sponsor their visits and pay for their tickets and stay if required. There is no rocket science in understanding that foreign players already train in better facilities and train harder. They don’t need to go through another training session to get inducted.

From the Hazara Premier League to HEC Intervarsity Football Championship, hundreds of players are overlooked every year who are more than capable of playing in the Pakistan Premier League. PFF should help our clubs recruit the best players from the provincial leagues and especially from the university teams. If a handsome salary is provide, I bet more players would opt for the sport. Funding from PFF could help these clubs scout for players and hire them.

4) Change the administration before changing coaches

Football’s popularity in Pakistan in the last decade is inversely proportional to our progress in this sport. We have all seen what Faisal Saleh Hayat had to offer and obviously, it’s not working. It’s time for a change, time to bring in someone who actually loves the sport and want us to do good in World Cup qualifiers and even beyond that.

We treat our top-division football leagues in the worst possible manner. I say if political gatherings and charity matches can be filled be a prominent audience, why not PPL matches? PFF should take the initiative of broadcasting league matches by creating advertisements and attracting people to the game.

I am more than sure that if PFF utilises the funds given by FIFA in any of the mentioned ways, football in Pakistan will excel and we will witness a dramatic change in our performance.