Why are we as a nation so obsessed with Imran Khan’s marriage? 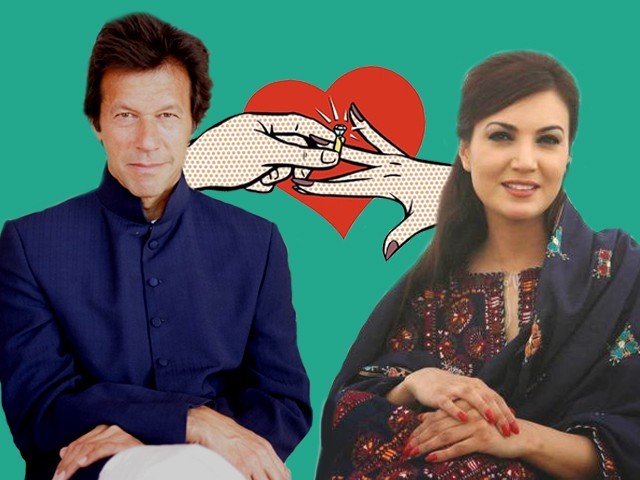 All was well and good, until the minute her name was linked with Imran Khan. And then she was dragged through the mud.

The New Year has begun, and by all indications, Pakistan is going to be as messed up in 2015 as it was in 2014, 2013, 2012… you get the idea. Things don’t look good for this beloved banana republic of ours, with terrorists breathing down our neck, military courts and death penalties, economic woes, and foreign policy Gordian knots that just keep tying themselves up again the moment someone brings a sword this way.

Yet the one matter of greatest importance on everyone’s minds (and tongues) is the marriage of Imran Khan. “Did he or didn’t he?” has surpassed “To be or not to be” in the ranking of soliloquies, drawing room chatter is all about the PTI leader’s relationship with the lovely Reham Khan, and news anchors are throwing all manner of coy hints that they knew about it before it happened, and that they still know more about it than we do but aren’t going to tell us exactly what they know (shades of Donald Rumsfeld).

There’s something very childish in all of this speculation. In many countries, people believe that a politician’s private life is his own matter. Not so Pakistan, where we have no sense of boundaries, privacy, or personal space. Here, we tend to think that a politician’s religious status and relationship status are one and the same, in that both are matters for public consumption. And especially in the case of Imran Khan, people think that his personal life is their public property.

I’m not saying Imran Khan is completely innocent in this state of affairs. He’s lived and loved fully, and it’s common knowledge, which is part of the territory of being a celebrity. He announced from the top of his container towards the end of the dharnas that he wanted to get married, which some claim makes the matter of his marriage part of the public domain.

Khan also capitalises on his own reputation as a ladies’ man, using it in not so subtle ways to gain the loyalty of his many admirers; turning that admiration into political capital. Whatever it takes — and any politician who’s lucky enough to be good-looking would do the same.

But here’s where it gets tricky: the double standards in Pakistan towards the freedom of men versus the repression of women have complicated things needlessly for the Kaptaan. And he’s finding that the freedom he enjoyed as a man doesn’t extend to the woman he supposedly wants to make his wife.

By all accounts Reham Khan is a woman who has also lived fully. She’s been married before, just like Khan, and has three children. She was a presenter and meteorologist for the BBC in the UK (I refuse to demean her with the sexist term “weather girl”), and was on her way to being a minor celebrity in that media-obsessed culture. Then she moved to Pakistan, where she got a job anchoring for ARY.

She is a good-looking, vibrant and educated woman, and is the very opposite of the village virgin that most Imran Khan supporters think is the only kind of person “good enough” for a man who’s hardly lived a monk’s life. And good for him, if he found this kind of woman more appealing than a young woman not much older than a child. A man who isn’t threatened by a woman’s desire to live life on her own terms is a man who is more secure in his masculinity than an insecure man who needs to have a blank canvas as a partner.

All was well and good, until the minute her name was linked with Imran Khan. And then she was dragged through the mud. Detractors of the politician dug up old photos of Reham wearing dresses and a video showing her dancing the tango at some sort of charity event. The worst kind of slander flew about her character and what she had to do to get into the BBC (baseless, without proof, and extremely sexist). Some of this came from his detractors, but much of the anger came from PTI supporters who felt betrayed that this might be Khan’s choice of life partner.

“We want what’s best for him and she isn’t it!” was the refrain.

It was like listening to an angry mother-in-law claiming that a wicked woman had “phassa-oed” her innocent son.

Kudos to her for having handled this pretty gracefully; many people would crack under the strain. Imran Khan’s been the one showing the pressure, as he refuses to confirm or deny the rumours that they got married somewhere back in the later part of 2014. We keep being told there will be a “big announcement” soon and in the meantime all sorts of ridiculous speculation is going on that he flew to London to get ex Jemima’s “blessings”, that his family is angry with him, so on and so forth.

All of this is really pretty pathetic when you see it for what it is: a nation stupidly obsessed with one man’s private life. Is it because we really care so much for Kaptaan’s well-being and want to choose his partner for him because we know better who’s right for him? Is it because we might be jealous that he didn’t choose one of us instead?

Or is it because speculating about his marriage is a lot more fun than actually having to face the hard truths about where this nation is really going?

I’ll let you be the judge. Heaven forbid I should actually tell you what to think, or do.