An apology is not enough, Aamir Liaquat must be fired 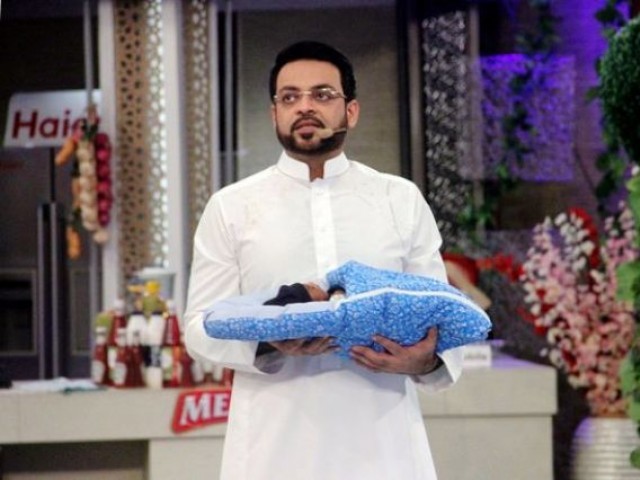 Social media is once again flooded with outrage at ‘Dr’ Aamir Liaquat – our nation’s foremost televangelist. During an episode of his morning show Subh-e-Pakistan, aired on Geo TV on December 22, one of Liaquat’s guests, Syed Arif Shah Owaisi, used inflammatory language to accuse the Ahmadi community of being responsible for terrorism in the country including the Peshawar attack.

To no one’s surprise, Liaquat applauded the cleric’s hate speech. On December 27, an Ahmadi was shot dead in Gujranwala. Such a sequence of events is not new to Liaquat’s television career. In September 2008, he promoted similar hate speech on his Geo TV show which was followed by the murders of three prominent Ahmadi leaders within two days of the broadcast. Neither Geo TV nor Liaquat ever apologised for their role in the incitement of anti-Ahmadi violence.

Unfortunately for them, such blithe indifference is no longer possible in post-Peshawar Pakistan. Following a nation-wide uproar, Pakistan Electronic Media Regulatory Authority (PEMRA) issued a show-cause notice to Geo. Moreover, the channel issued a ‘clarification’ on December 30, apologising for the editorial lapse. The statement is available on Geo’s website. Several members of the civil society, who wrote to the channel’s management team, received personal replies assuring us that Geo is taking necessary steps to strengthen their editorial review process. These are all very positive developments and Geo should be commended for responding to the concerns of the public.

However, it is hard not to dismiss these steps as mere PR damage control tactics when the channel continues to let an unrepentant Aamir Liaquat continue with his program without so much as a hint of an apology. Not only that, the official ‘clarification’ released by the channel leaves much to be desired. The statement notes that ‘a comment made by a guest’ during the morning show ‘violated the network’s code of conduct’. Let us be clear that that the objectionable contents of this episode were not limited to one guest. After Owaisi was done declaring Ahmadis the common enemy of all Muslims and blaming them for the Peshawar attack, another guest, Hamza Ali Qadri, stepped in to inform the audience that the day Ahmadis were declared non-Muslims by the state in 1974, a member of that sect warned him of the violence that would be unleashed upon Pakistan to avenge the decision.

While it is perfectly true that during live transmissions it may be ‘difficult to control crowds and guests who speak their mind-sets,’ this excuse absolutely does not apply to this particular episode. Aamir Liaquat made absolutely no effort to redirect the conversation even though there were clearly several opportunities to do so as his guests paused between taking turns to insult Ahmadis. And far from being out of control, the audience only applauded Owaisi’s comments because Aamir Liaquat started to clap and gestured towards the audience to do the same. Attributing the violation of the network’s code to an isolated comment by a single guest is a mendacious attempt to exonerate Aamir Liaquat.

The statement, which reads more like a eulogy to Liaquat than an apology, further states that it is an ‘undeniable fact’ that Liaquat has promoted ‘multi-faith dialogue and harmony’ through his programs and encouraged the participation of religious minorities ‘more than any other program in Pakistan’s television history’. Whoever drafted this statement obviously doesn’t consider the Ahmadis as a religious minority because no representative of that community has ever participated in any of Liaquat’s shows. And while Liaquat may have the honour of fostering unprecedented dialogue with minority communities, as of today he also has the blood of three people on his hands.

Never one to shy away from airing his frequently misogynistic, jingoist and bigoted views, Liaquat is the face of mainstreamed religious extremism in Pakistan. His antics embody pretty much every problem that plagues our society today. And the fact that he is the star of the largest media group in the country only highlights the extent of our collective denial. The campaign to hold him accountable is in response to his chronic verbal diarrhoea on national TV and is not limited to a supposedly isolated comment made by a guest on his show.

Geo’s statement acknowledges that the channel itself has been ‘the victim of the wrong use of religion and several members of its team are facing threats’. This is obviously a reference to the accusations of airing allegedly blasphemous content on a morning show last May. How sad that this awareness on part of the channel’s team was not enough to stop Liaquat from accusing Junaid Jamshed of blasphemy and inciting violence against the ex-pop star. The level of hypocrisy at play here can be gauged from the fact that it was none other than Liaquat who was packed off to Makkah for damage control by the channel after the fiasco last summer.

And then there’s the matter of Liaquat hurling vulgarities at Junaid Jamshed’s mother. The ‘clarification’ that followed was even more disturbing as he extended his abuse to include his own as well as everyone else’s mother! Understanding the association between a person’s respect for Hazrat Aisha (RA) and their mother’s sexual history is a pleasure I shall leave to Liaquat’s many admirers.

But the good ‘doctor’ is at his finest when it comes to casting invectives at India to the deafening applause of an audience obviously very receptive to his brand of a gaali galoch laden Islam. His response to India’s ban on Pakistan’s hockey team was a new low even by his standards. In any other country, such obscenity would have earned his show a PG-18 rating. In Pakistan this kind of vulgarity passes for patriotism.

Like a common thug, he reacts to any and all critique with more trash talk. Two summers ago, a Pakistani columnist who dared to criticise his Ramazan transmission was declared the most ‘ghatiya insaan’ (pathetic person) in the world on national television. He recently responded to criticism in an Indian paper by threatening to gouge out the writer’s eyes. Perhaps he thinks he is once again showcasing his ‘lighter side’. That is the explanation he gave the New York Times regarding the embarrassing outtakes from his show which were leaked on YouTube in 2011. Earlier he had insisted that the video was doctored and even accused his favourite punch-bag, the Ahmadi community, of being responsible.

However, the issue is far more serious than that of vulgarity. There can be no greater dishonour of the victims of the Peshawar attack than to give space to those lying about the identity of the killers on national TV. And the Geo group has done it repeatedly, not only by allowing Liaquat to air his mindless jingoism on his morning show where everyone from Ahmadis, Jews and Indians are accused of orchestrating the Peshawar attack, but also by running an article in two of their flagship publications in response to the blowback against Subh-e-Pakistan’s episode featuring Owaisi and company. In this article, an absolutely unapologetic Liaquat once again accuses Ahmadis and India of mounting the ‘propaganda’ against him. To make matters worse, Geo’s official clarification links back to this article! I am sorry but it is hard to believe in the channel’s sincerity when their ‘apology’ features their unrepentant star promoting the very bigotry that precipitated the whole issue in the first place.

We are at war. And this war is not against a group of individuals. It is against an ideology. The killing of Ahmadis, Shias, Christians, Hazaras, and Hindus is just as terroristic as the Peshawar attack. We can wage countless Zarb-e-Azabs, hang every terrorist in the country but we will never stop creating their replacements as long as we do not confront radicalism in all its forms. In the episode of Subh-e-Pakistan, aired one day after the Peshawar massacre, Liaquat said,

“We should be very clear about who our enemy is.”

He’s right. We should be very clear.

And the fact is that our enemy is neither India, nor the Jews nor the CIA. It is a home-grown extremist ideology that the likes of Aamir Liaquat routinely unleash on national TV. His vitriol cannot be controlled. He must be fired. War demands sacrifices. It is time Geo placed greater premium on human lives than on TRP ratings.

The author is a first year doctoral student of anthropology at the University of Pennsylvania.She tweets @fatimatassadiq (twitter.com/fatimatassadiq) and blogs at fatimatassadiq.wordpress.com.

Women, the stuff maulvi nightmares are made of

Trivialising rape: A guide for the ‘enlightened’ elite