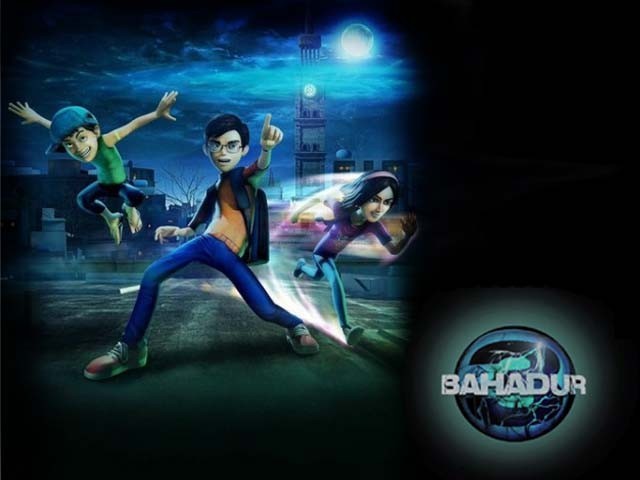 3 Bahadur is a 3D animated film, following the adventures of three friends who set out on an epic journey to save their town from the evils that plague it.

Rewind 10 or 15 years from today to look at the shape and size of the Pakistani film industry, rather hilariously named as Lollywood, and you will not be able to help but wonder – how on earth did they come such a long way?

From the days of dancing actresses trying to seduce their lovers in green fields to ground breaking movies like Bol, Waar, Na Maloom Afraad, Dukhtar, Zinda Bhaag and the likes – the progress and escalation of Lollywood in the right direction is very apparent. There’s a clear improvement in the scripts, the screenplay, direction and every aspect of the movie you would once laugh at if it were a Lollywood movie. That is now changing. There’s no doubt that they still have a long way to go but there’s also no doubt that they have finally embarked upon the right journey.

Progress has been phenomenal and evidencing this is the latest addition to the list of achievements of the Pakistani film industry – Sharmeen Obaid Chinoy’s 3 Bahadur. 3 Bahadur is going to be Pakistan’s first ever feature length animated film. The film has been produced by Waadi Animations in association with ARY Films and is yet another reason to be proud of our budding film industry.

The project, one which seemed overly ambitious and unrealistic when it was initially announced, is all set for release this summer.

3 Bahadur is a 3D animated film, following the adventures of three friends who set out on an epic journey to save their town from the evils that plague it. Equipped with courage and super powers, Amna, Saadi and Kamil (the main characters of the film), battle against the odds to restore peace and harmony to their neighbourhoods.

Having attended the launch event of the movie and I was lucky enough to hear Chinoy share her thoughts on the project. A very gleeful Chinoy, the proud CEO of Waadi Animations, said:

“Almost three years ago, I had an intense desire to create an animated feature in Pakistan which would appeal to both children and adults alike. I have to admit, venturing into the realm of animation was unchartered territory for me and my team, but everyone quickly warmed up to the idea and we began learning the ropes and assembling a team of some of the best animators in the country to work with us. We are proud to announce and share the fruit of our hard work and efforts; Pakistan’s first animated feature film!”

To say the very least, it is heart-warming and exciting to see the Pakistani film industry growing leaps and bounds. Film makers now have greater visions about what they want to create and the best part is that sponsors and partners are willing to invest in their ideas. It is this combination that escalated Bollywood to the heights it is at today.

Here’s to hoping for success for 3 Bahadur and for the Pakistani film industry to continue growing and achieving new heights in 2015.

Pursuing her Masters from IBA, she is a communication professional. Movies, Shopping and Marketing are on top of her list always. She tweets as @zoya_altaf (twitter.com/zoya_altaf)