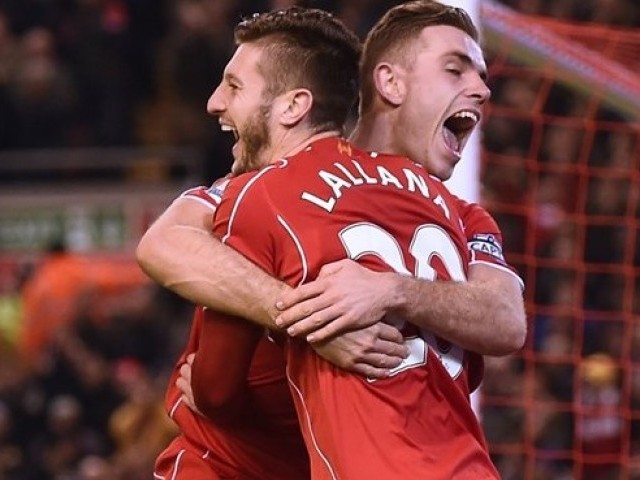 Liverpool ended the year on a high note as the £25million signing from Southampton, Adam Lallana, scored a brace, while the entire squad shined on Monday night at Anfield. The Reds completed a 4-1 rout of manager Brendan Rodgers’s former club Swansea City AFC.

The last Premier League game of the year was a delight to watch as both sides contested for the win; however, Liverpool were by far the dominant side and went into the lead with Alberto Moreno netting the goal – his second of the campaign – in the 33rd minute.

The second half kicked off quite brightly as two goals in two minutes set the game alight at Anfield. First Swansea goalkeeper Lukasz Fabianski’s attempted clearance was blocked by Lallana and it ended up in the back of the net for Liverpool’s second goal in the 51st minute. Then Gylfi Sigurdsson scored in the 52nd from six yards to get Swansea back in the game at 2-1.

However, a brilliant back-heel from Phillipe Coutinho set up Lallana, who took it on his left foot and slotted past Fabianski to score his fourth goal in 12 league appearances for the Reds.

Lallana celebrates after Fabianksi’s clearance hit him and looped into the net. Photo: Reuters

Jonjo Shelvey, who escaped a probable red card when he elbowed Emre Can just before the first half, helped his former club by heading in the corner from Jordan Henderson for Liverpool’s fourth goal of the night.

All-in-all the Reds showed signs of the side that came close to winning the title last season, with high fluidity and breath-taking creativity in the gameplay which led to Rodgers lauding his team’s progress.

Since the Reds’ exit from the Champions League, after a 1-1 draw against Basel, the Merseyside giants have been progressing one game at a time. Rodgers took matters in his own hands and, instead of crying over the lack of quality in the forward line, changed the shape and system of the team.

The ‘3-4-2-1’ revolution saw Liverpool create more chances than they have this season in the 3-0 loss to arch-rivals Manchester United. The Reds took 19 shots out of which nine were on target, while they were awarded seven corners, which they failed to convert.

United took advantage of the flailing defence and punished Liverpool for their defensive blunders but the revolution that saw Liverpool create so many chances at Old Trafford has now begun to reap rewards as Liverpool are now consistently converting those chances – a feat which has not been witnessed since the start of the 2014-15 campaign.

Relying less on the specialised forwards – Mario Balotelli, Rickie Lambert and Fabio Borini – Rodgers has given his more creative players the freedom and space to work wonders with the ball at their feet. Lallana and Coutinho have increasingly shone in the last few games and have been involved in the midst of the attack since the change in formation.

Golden Boy Raheem Sterling has relished his role of the lone striker in front, and together the trio of Lallana, Coutinho and Sterling have unleashed a plethora of creativity and innovation in the opponent’s penalty area which can open up even the tightest of defences.

Lallana’s second goal was tantamount to the above claim as Coutinho’s backheel instantly opened up the Swansea defence, who were left clueless, and were unable to stop the English forward’s drive into the back of the net.

Moreno and Javier Manquillo also shined in their new role as wing-backs. The Steven Gerrard-less Liverpool side now looks more dominant entering into the New Year, and the second half of the season, to achieve their goal of finishing in the top four and qualifying for the Champions League.

Although it can be said that it is too early to pass any judgement on the Liverpool side, but the recent form and fluidity in the play that has been there since the Manchester United game is highly encouraging for the manager and fans alike.

The manager can now assert his system and probably might even get more funds to bolster the squad in January. The fans saw their side score two or more goals at Anfield – a feat they last witnessed on April ‘13 in a 3-2 win over Manchester City.

Regardless of the beef that the manager has been receiving since the start of the current campaign, the Northern Irishman has found his way and will certainly be receiving the plaudits of a resurgent Liverpool side as the New Year starts.