Why can’t we clean our streets and houses ourselves? 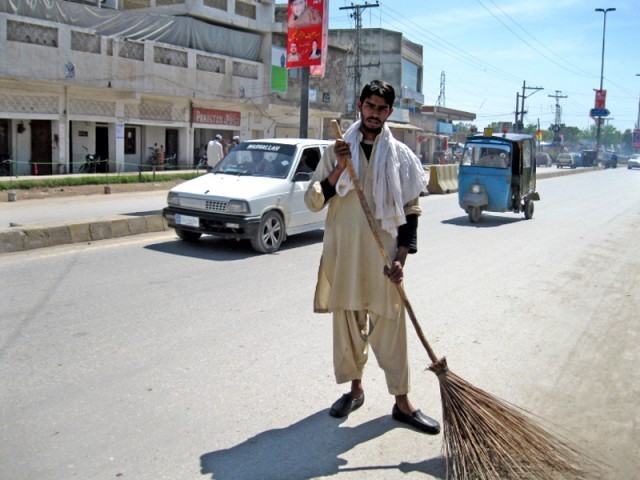 Why can’t they be allowed to choose another occupation, like becoming a green grocer or fruit vendor or anything else? PHOTO: ASAD ZIA / EXPRESS

It was December 25, 2014 and I was heading out for work. As I approached the main gate, my eye caught sight of our building’s notice board. The words scribbled on the board left me dumbfounded.

“Important Notice: On December 25 and December 26, on account of the Christian community’s religious festival, Christmas, the sweepers will be off. Hence, on these two days, residents are requested to make sure garbage is not dumped on their balconies and special care is taken of their surroundings, with regards to cleanliness. Thank you.”

Though born and bred in this country, never before that day had I realised that on Christmas Day the streets, office washrooms and buildings are not swept. Despite cleanliness being an important part of Islam, in Pakistan, unfortunately, it is taken as a job beneath the stature of Muslims and thus, handed over to the Christian population of the country.

I tried to put myself in the shoes of the sweeper and read the notice again. I felt angry, demeaned and heartbroken all at the same time, and the realisation made me feel very sorry for the state of affairs of our country. Does being Christian in Pakistan automatically mean that this the only job available to them is that of a sweeper or the likes? Do their qualifications merit no regard?

I have seen children as young as 12 or 14 sweeping or washing the stairs of the apartment building I live in, and my heart goes out to them. Are we not responsible enough citizens of this country or responsible enough human beings to realise that the rightful place for these children is a school? Why, then, are they not seen going to school? Why are they taught to pick up a broom as soon as they enter adolescence?

Why aren’t they allowed to choose another occupation? Why aren’t they given the hope of becoming a doctor, banker or teacher in this country? Even simpler jobs like becoming a green grocer or fruit vendor seem to be out of their reach? Why?

The answer is, because Pakistan is not an egalitarian society. We are a nation that depends on minorities and the poor to clean our houses and streets because we are too stuck-up too do it ourselves. Because, God forbid that anyone ever assumes we have to clean our own backside. Even though it was our very own Prophet Mohammed (PBHU) who said that cleanliness is half our faith, we wouldn’t dare pick up that broom.

Are we really even Muslims, seeing how we are far from cleanliness?

We are a biased society, a nation so spoilt and lazy that we do not, even for a day, care to look after our streets or buildings or garbage on our own; we depend on the poor minority for this and, furthermore, we brand and label them for doing it. We ridicule them for it. This is not what our religion teaches us. We are brought up hearing that cleanliness is half faith, but why do we not implement it in real life?

Forget my apartment; my office had the same scenario. As journalists, we don’t get too many holidays. We work on August 14 and December 25 too. When I came to work that day, I saw that the washrooms were dirtier than ever and toilet papers were all over the floor. The wash basin was choked but was still being used. Those two days at work were very difficult – so much so that I visited the toilets very reluctantly and only went when I absolutely needed to.

I never treat anyone on the basis of religion and I think most educated and enlightened people are alike. I lived over four years in the UK and noticed that no one could ever make out whether a person was a sweeper or not. They would go to bars and restaurants in the evenings and mingle and enjoy meals like other professionals and no one would ridicule them.

Being a sweeper is not a stigma; furthermore, it is not limited to just one community or minority. Anyone can be a sweeper. Most interestingly, on Christmas, Christians also work in Europe and for working on Christmas Day, Boxing Day and New Year’s Day, they are remunerated with triple the usual pay. Of course, here I am talking about those who work on daily wages, so a lot of people love to work on these three days to earn some extra bucks, even though a lot goes to taxes.

What I mean to say is, had the job of cleanliness not been marked as only for the Christian community, we wouldn’t have lived in utter filth those two days. We need to let go of this idea that one kind of work is better than the other. If someone is earning an honest living, then it’s a respectable profession – there shouldn’t be any discrimination.

We believe in four holy books, and out of them, one was revealed on Hazrat Essa (AS) (Jesus Christ). This makes me question, are we not supposed to mark his birth anniversary being Muslims? Why do only Christians celebrate Christmas and not us? Perhaps if we start doing that, we might become less aggressive towards our minorities and might start treating them with respect.

I do wish we Pakistanis become better human beings and humanity prevails in this part of the world.

I will not quit my job just because I am married