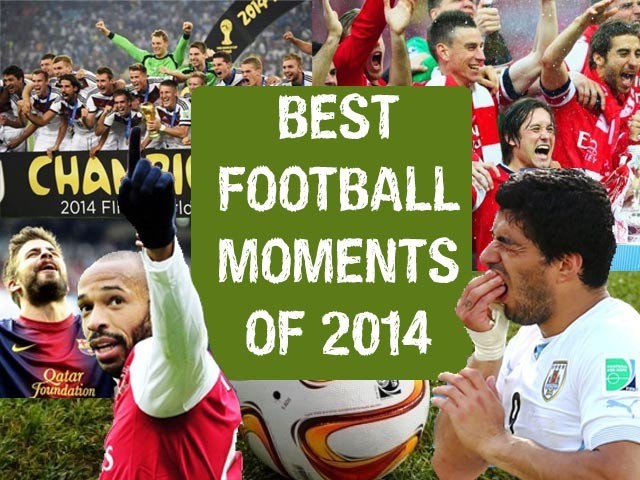 This year has given us some exceptionally amazing moments in football, and as the year end approaches, I hope that 2015 brings us equally enthralling football matches.

2014 is knitting its ends. A look at the emotional and action-packed moments the year brought in football makes many lucid memories, debates, emotions and honours come alive. Here’s to a memorable year in football that decisively went down in history.

Here are the ten action-packed moments of 2014 that left us coping with a tornado of convoluted emotions:

The host team, Brazil, saw itself in the semi-finals against Germany. The limelight fixture gathered unique attention when Brazil suffered a staggering loss of 7-1 to Germany. The Germans engraved their milestone on South American soil with goals rapidly accumulating into an epic score line. The world was left with haunting tales to narrate while Brazilian supporters stood on the side-lines, devastated to see how their country’s journey had ended.

Germany’s Bastian Schweinsteiger (7) holds the World Cup trophy as he celebrates with teammates after the 2014 World Cup final against Argentina at the Maracana stadium in Rio de Janeiro. Photo: Reuters

This is exclusively the funniest incident Merseyside and football fans around the world have witnessed this year. He was picked by, teammate Glen Johnson, to clear out the ball, but Liverpool captain Steven Gerrard had other things on his mind. Not only did he slip but inadvertently allowed Demba Ba to score and Chelsea to win at Anfield! The agonising, ‘title-ending’ slip shattered fans who expected the league’s glory to finally come alive. Every witnessing corner saw the moment, on repeat might I add, that blew away the league out of Liverpool’s hands.

Dutch captain Robin van Persie came to the spotlight this year for his immaculate run and head dive; this moment became a milestone in his career during the 2014 World Cup. After a beautiful ball by Daley Blind, the striker dived in to the air to set the ball into a unique header, swirling past the goal line. Football fans dubbed it their most favourite goal of the tournament; in fact, the goal has been shortlisted among top three contenders for the FIFA Puskás Award.

The Los Blancos were not tenacious at all against rivals, Atletico Madrid, in the 2014 Champions League final in Lisbon, until the clock stretched to the 94th minute when Luka Modric’s corner set Sergio Ramos in a dramatic equaliser. The servile header went past Thibaut Courtois, leaving Real Madrid fans jumping for joy while the opponents sat back, heartbroken. The 1-1 score took the final into extra time where the enthusiastic side scored three more goals and went on to lift the trophy.

Luis Suarez completed his biting hat-trick during Uruguay’s decisive victory over Italy in the World Cup, when he bit Italian defender Giorgio Chiellini. Chiellini had attempted to scythe Suarez down and in turn became victim to his uncalled for (but funny) retaliation – the bite. This did however lead to Suarez being handed a four-month ban from football.

The arrival of Louis Van Gaal uplifted Manchester United as they set off their season campaign anticipating success. However, a match against an intermittent side, MK Dons, saw the Red Devils lingering out of the league cup. The astonishing performance of MK Dons witnessed a score of four goals against United, leaving their fans appalled. The match result remained a pungent topic for a long time.

December 16, 2014, galloped pervasively with the news of Arsenal legend Thierry Henry’s retirement from football, as he sealed his career with an abundance of honours. The day broke the hearts of many football fans. Henry’s career is replete with 430 career goals, including 228 for Arsenal, and 20 trophies, including the 1998 World Cup and Champions League.

El Clasicos witnessed another sensational moment as the lucrative signing of Gareth Bale paid off in winning the Copa Del Rey for Real Madrid. Eighty-five minutes into the final against Barcelona, with the score-line tied, the €100 million Real Madrid superstar sprinted half the length of the pitch, leaving Barcelona players, especially Marc Bartra, trailing far behind. The Welshman lived up to his reputation, left the world stunned and proved to be well worth the world’s most expensive signing.

The last time Arsenal was crowned anything was in 2004 as ‘The Invincibles’ and in 2005 when they won the FA Cup but after the Gunners won the 2014 FA Cup against Hull City, at Wembley, statements like, “since Arsenal last won a trophy…” were finally put to rest. Until then, they had stretched their devious reputation of winning no trophies for nine long years! The manager and fans breathed a sigh of relief and were excited to relive the glory days again. Arsenal kicked-off the 2014-15 season winning the Community Shield against Manchester City.

The summer transfer window was a full-fledged entertainment package after the World Cup. Big names exchanged big deals for big clubs. These include James Rodriguez, Radamel Falcao, Danny Welbeck, Robert Lewandowski, Ángel Di Maríai, Alexis Sanchez, Suarez, Mario Balotelli, Cesc Fàbregas, Diego Costa and many more. Until deadline day, fans were either seen rejoicing the transfer of their favourite player to their team, or frowning upon why their favourite superstar was walking away. A rather emotional time indeed.

And with this, I wrap up the football moments of 2014 and buckle my seat-belt for the arrival of 2015 in the hopes for an equally satisfying year in football.