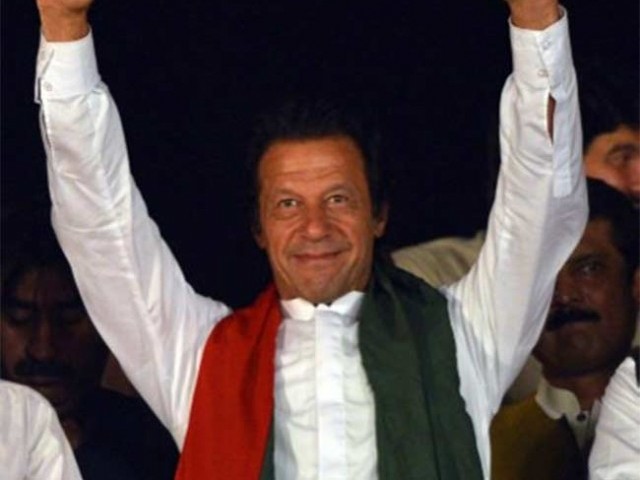 While many of his arguments against drone attacks were just, by creating the illusion that militants existed because of the drones, he played a significant role in swaying public opinion in favour of the ‘good Taliban’ and hence against army action. PHOTO: REUTERS

It was September 22nd of last year; one of the blackest days in the history of Pakistan.

It was a day when the Taliban targeted a church in Peshawar with a pair of suicide bombers who ripped through a congregation 500 strong. The savage destruction that followed resulted in the death of over 78 Pakistanis with nearly 150 wounded. It was an act of terror in every sense of the word, and casualties included both women and children.

We watched in horror on our television screens as tragic images of injured Pakistani worshipers flooded news channels. At first glance the aftermath resembled a butcher shop, and we could only imagine the agony of the victims and the trauma forever imprinted on the hearts of the loved ones left behind.

Finding it difficult to process the nausea, we looked to our leaders to respond in the strongest possible way.

Instead we had to listen to insensitive politicians playing politics.

Not three days later, PTI’s Imran Khan, chairperson of the party that governs Peshawar, rubbed salt in the wounds by reiterating his stance that the Taliban be allowed to open an office in Pakistan. Such comments were insensitive at best after such a horrific attack. To make matters worse, he once again failed to unequivocally condemn the killers who were openly taking credit for the attack, and disturbingly enough, provided an indirect defence for their actions.

Khan’s dangerously flawed argument was that we were hitting the militants too hard for them to be convinced into surrendering their arms. But as last week’s barbaric school attack in Peshawar has shown, apparently we hadn’t been hitting them hard enough.

If anything, PTI’s pro ‘good Taliban’ stance has always remained consistent, yet curiously enough, PTI has taken a significantly harder stance on the TTP since the school attack in Peshawar.

In what is a definite change of pace, members of PTI and Khan himself have expressed strong condemnations on TV and social media. What’s more, they have been more in favour of retaliation than ever before. This isn’t the first time TTP have slaughtered countless civilians, yet it is the first time PTI has hinted at taking the gloves off.

Perhaps the difference is that the victims here are Muslims and not a minority group like the Christian community or the Ahmadis. Or perhaps the minimisation of drone attacks has meant that PTI has lost an important tool in its propaganda machine. Another reason could be the Pakistan Army’s successful Zarb-e-Azb operation; the militants aren’t as threatening as they have been.

While there can be no doubt of Khan’s bravery, considering his open presence during street movements (he boldly took to the streets when former president, General Pervez Musharraf, was at the height of his brutality), PTI cannot function without the feeling of safety; had the Taliban been openly targeting PTI, supporters would be unable to join the protests so freely to strengthen PTI’s important street power. Khan may have also realised that he has ridden the wave of religious sentiment as far as he can, and is now better off concentrating on his new hook – the election rigging issue.

Khan has been struggling on the political scene for eons and failed to make a dent until recently. Many Pakistanis were tired of the familiar political parties taking turns at sucking the nation dry and were desperate for someone to sell them change. In our desperation, we turned to a man who won us the World Cup and is a proven philanthropist with immense reserves of resolve.

But our need for a clean political party wasn’t enough to win PTI enough votes. Imran Khan needed something else to galvanise the masses.

Here is the truth about many from our nation. A truth that is on the surface for some and lies deep for others, only waiting for a crisis to rise; we like to blame others for our predicament, especially on the subject of terrorism. After the Peshawar school attack, social media memes went viral where angry letters were written to Barack Obama, David Cameron, and even CNN, blaming the West for the creation of the Taliban. For some reason, we tend to trust bad ‘so-called Muslims’ than any non-Muslim.

After the Peshawar school attack, our neighbours in India displayed moving solidarity, taking the losses to heart as if they were their own. Meanwhile, across Europe and USA, candlelight vigils were held in remembrance of the school children killed. On the other hand, our own so called Muslim brothers in the Middle East have been largely quiet on the issue. Yes, whenever there are acts of terrorism in the nation some of us like blaming India and the United States, yet we never blame the wealthy Middle Easterners who have influenced the radicalisation of madrassas.

Nothing is more contradictory than the abuse Nobel Prize winner Malala Yousafzai continues to face. Like the Peshawar victims, she was also attacked by the same militants, yet she faces mistrust simply because she was hailed by the Western media. Granted, Pakistan has been used as a chessboard by several Western powers over the years, but our constant mistrust of the West is like a poison that grows in our hearts and blinds us to a more direct threat.

Imran took advantage of this sentiment to gain some popularity. It began when he paraded for Dr Afia Siddiqui’s cause, demanding her immediate release. Did it matter to him that reports suggested she had married the nephew of a 9/11 attacker? That her own former husband finally broke his silence to say that she was radicalised, manipulative, and on the path to violence? That she was so closely associated with militants? That she was not even a Pakistani, but a citizen of the United States?

It certainly earned Khan some brownie points even if it fuelled Pakistan’s paranoia about the West. But the PTI chairman never had the heart of Quaid-e-Azam even if he openly wishes to emulate him. Clearly, he is inspired by Quaid’s position and not Quaid’s character. At this moment in time, protests against extremism are taking place at Lal Masjid led by independent politician Jibran Nasir, a man with more in common with Quaid-e-Azam than Imran Khan.

Khan’s most controversial stance was on the drone attacks – a stance that has seemingly changed, since the drone attacks resumed after the Peshawar tragedy without a word from PTI. The drones proved to be PTI’s golden ticket into the limelight as Imran managed to find the issue to rile up the feelings of victimisation in every Pakistani. On some level we all believe that the West is out to get us, and PTI’s anti-drone drive certainly ignited all the drones sitting at home on their couches and behind their keyboards.

While many of his arguments against drone attacks were just, by creating the illusion that militants existed because of the drones, he played a significant role in swaying public opinion in favour of the ‘good Taliban’ and hence against army action.

It is this apologist attitude that earned Imran Khan the title of ‘Taliban Khan’. It was a nickname that was used widely across Pakistan’s media, yet it was only Geo Network blamed by the PTI chairperson for creating the name. The accusation was staggering because Khan was obviously ignorant of the actual reason he was being called Taliban Khan and seemed to be in some form of delusion that it was a conspiracy started by media house.

Now, I am not someone who enjoys watching Geo. In fact, I’d rather watch paint dry or houseflies procreate than watch Geo News, but I certainly feel for the network’s people. Invariably, Imran fuelled hatred against the network by taking jabs in every speech through a barrage of allegations that weren’t accompanied by evidence. On the other hand, the network’s reporters constantly tweet images of facing violence at the hands of PTI supporters.

Khan says he has never asked his supporters to take up violence against the network. While this may be certainly true, it would be naïve of him to assume that his ‘passionate’ supporters wouldn’t be instigated by his fiery words. But for Khan, there never seems to be a fruit that hangs too low.

Likewise, Imran Khan certainly had a right to his belief that Ahmadis don’t qualify as Muslims, but perhaps he should have kept that belief to himself rather than further isolating an already marginalised minority. But the statements were never surprising. After all, since he began playing cricket, Imran Khan has always been a crowd pleaser.