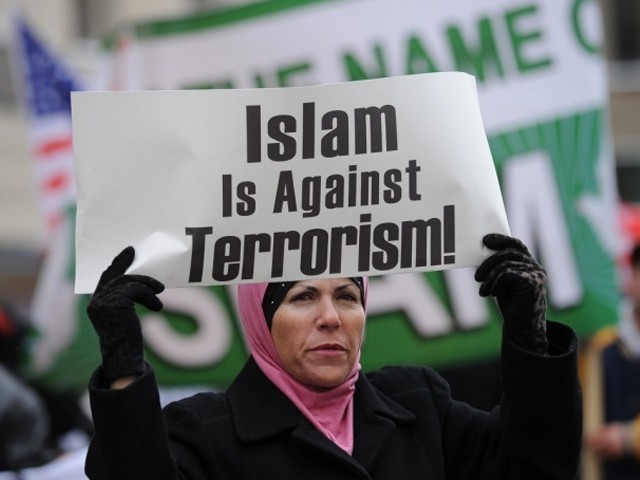 It is not okay to use the words Muslim terrorists as it blankets all Muslims. PHOTO: AFP

I don’t even remember the rest of his sentence. Those words stunned me for a minute. But even as my ears started ringing, I took a couple of deep breaths telling myself,

“He doesn’t know what he is talking about. There is no use pointing out his poor choice of words.”

It is ironic that this happened in a class where our 73-year-old African-American Professor, himself a victim of racism, had been teaching us how to recognise the various forms of racism in America that are present even today.

“I just want to share an observation”, I heard my own voice say to the professor, strong and calm. “And it isn’t a personal attack on anyone.”

I nodded towards the young guy sitting a few rows behind me, making sure he comprehended that I did not mean any offence.

“But Sir, did you notice that one of your students just said Muslim terrorists and you did not even blink an eye.”

A murmur rose in the class. The young man took a sharp breath and slammed his hand against the table. I continued calmly, ignoring his reaction,

“I just wanted to point out that while we study the ghastliness of the effects of racism in America, we are witnessing a new form of racism taking birth right in front of our eyes, where Muslim and terrorists are almost always uttered in the same breath. And this is a completely accepted form of expression, like nigger was a century ago.”

There was a sudden explosion of rage from the young man sitting behind me.

“I am sick of people always talking about how Muslims are the victims and how there are moderate Muslims in the world.”

My hands started trembling. I don’t know if they were trembling from rage or fear. If I were to be completely honest, I’d say it was a bit of both.

The guy kept shouting in rage as the professor and a stunned class looked on.

Again, I heard my own voice, louder this time, and a lot firmer

“I am a moderate Muslim.”

I got up defiantly and turned around so he could see me. I looked straight in his eyes, this 20-something young man, with a hoodie and a baseball cap. And angry eyes, full of hatred, for Muslims, and now me.

“Do you want to know what Islam is?”

I forced myself to keep my voice calm.

“Islam is peace and love and acceptance. God says in the Quran, if you murder one innocent man, it is as if you have murdered the entire mankind. While we sit here and nod our heads in admiration at Lincoln for abolishing slavery in America only a 100 years ago, do you know that Prophet Muhammad (PBUH) abolished it 1400 years ago?

I paused, looked into his eyes defiantly,

With his hands still trembling with pent up rage, he countered, this time with his voice lower,

“But what about jihad? Your Quran says to go for jihad…”

“Do you know what the essence of jihad is?”

I looked at him, not expecting an answer,

“Me, standing up right now, speaking the truth, that is jihad. Our professor trying to educate us, that’s jihad. A mother trying to raise her children as good human beings, that’s jihad. Just because less than one per cent of a Muslim population which comprises more than two billion of the entire world twists the words of the Quran to fulfil their own thirst for innocent blood, it is not okay for Muslim and terrorist to be synonymous with each other.”

My voice rose, despite my efforts to keep calm,

“I hate them, all Muslims hate them. Because Muslims have suffered at the hands of those people you call Muslim terrorists much more than any other people in the world.”

As the rest of the class joined in the discussion, I sat there for a while and listened. To my surprise, 70% of the class agreed with me. They understood the simple point I was making, that it is not okay to use the words Muslim terrorists as it blankets all Muslims.

Interestingly, as another class mate pointed out to me later, most of those who agreed with me were non-white Americans and immigrants. They were Persian, Latino, Asian, African-American, Russian, amongst others. They were minorities who could empathise with being stereotyped. That does not of course mean all white Americans are racists – they most definitely are not. And then there were those who spoke the same language I see often on American media as “political experts” churn out the same Islamophobic narrative to the common man. They threw around words like

“They came to our country and did 9/11… they need to be destroyed.”

In the aftermath of the Peshawar school attack which took place on December 16th, what some are calling Pakistan’s 9/11, I have felt emotions from shock to rage to despair. But as the other emotions dim with time, one emotion remains – guilt.  The guilt of abandoning my land. The guilt of not being able to help. The guilt of living a secure life with my children while other mothers from my Pakistan bury theirs. Of course, I have my excuses, like the fact that I was myself almost a child-bride when I came here, and I did not have a choice. Or that now I am a mother – I have to choose the safety of my children over my passion for a country whose love I know still courses through my veins.

And the only thing that I, the selfish, guilt-ridden expatriate, can think of doing in the aftermath of a tragedy so devastating most of us are still trying to wrap our heads around it, is to speak up. Show my face, stand up, raise my voice and show the world that I am a moderate Muslim. It starts by talking to one person, one neighbour, one friend, one co-worker.

Recently, a Russian lawmaker, Shamsail Saraliyev, proposed a ban on expressions such an “Islamic terrorist” and “Islamic militant” in the mass media, explaining that it gives the wrong impression of Islam and Muslims all over the world. Saraliyev said,

“These expressions push people towards the conclusion that Muslim religion and terrorism are the same thing. Common people automatically begin to associate Muslims with bandits, murderers and terrorists.”

He further explained that traditional Islam a creation that promotes and believes in peaceful coexistence between all people, and that the media reports about the religion calling for aggression and extremism is either a mistake or a baseless lie.

When giving the example of Islamic State of Iraq and Syria (ISIS), he said,

“Just as we don’t call fascists ‘Christians’, we should stop using the term Muslims when we describe radical militant groups who claim to be followers of Islam.”

We as humanity, not just we as Muslims, are in the fight of our lives. At the end of the day, it is the fight of good versus evil. Remember, both the faces of good and evil transcend race, religion, colour and creed – we all need to do our little part to make each other understand this simple truth.