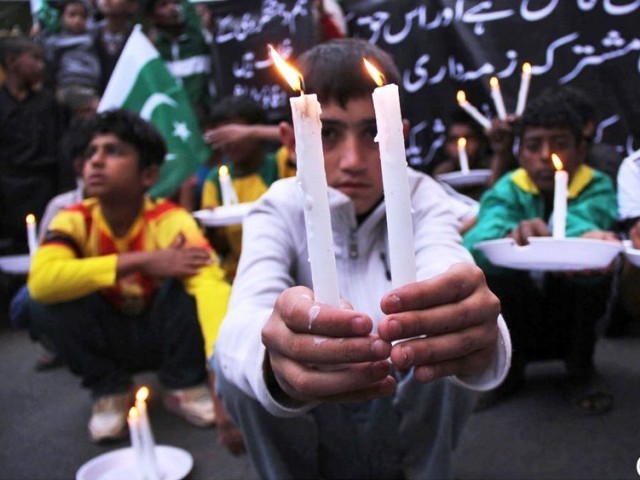 A boy holds candles during a demonstration outside the Karachi Press Club organised by a local NGO to show solidarity with the unfortunate victims of Peshawar school attack. PHOTO: ONLINE/FILE

The nation is in shock after the events of the Peshawar school attack. Even for a country that has seen its fair share of violence, the tragedy that occurred was unbelievable.

After becoming aware of what had happened, I sat in silence, overcome with grief, contemplating questions such as ‘Why had this happened?’ and ‘Who would do such a thing?’ But it became clear to me that perhaps I was going about it all wrong. I was trying to make sense of a situation that could never make sense.

Those that took part in the violence yesterday were psychopaths. They were scum. They were monsters. And it is high time we wake up to this fact and start recognising them as such.

I know that people are out for blood. It is understandable to want justice for the unbearable loss that we have suffered as a nation. In that vein, the prime minister has lifted the ban on capital punishment for those involved in terror offenses, but I don’t believe that is the answer.

Militants such as the ones responsible for the attack have no fear of death because in their twisted mind they are setting out to attain martyrdom. Thus, capital punishment will not be an effective deterrent.

The only way to deal with such stains on humanity is to lock them up and throw away the key.

Let them rot for the rest of their lives in a filthy cell so that they can reflect upon their actions. Let them grow old in solitude and be reminded every single day that they are nothing more than murderers of innocents, murderers of children; that there is no paradise awaiting them, only hellfire.

On the other hand, the question that we should all be asking ourselves is – how do we prevent this situation from ever happening again?

Military action against all terrorist outfits in the country might be one piece of the solution. But even if we wipe each and every one of them out, as many are demanding, unless the root cause is addressed, more will just take their place.

Imran Khan has become an easy target due to his earlier stance of negotiating with the Taliban. Whilst his approach might have been too idealistic or naïve, he was not the bad guy people are hell bent on painting him to be. Imran’s logic was that the Taliban are made up of several different factions, each with differing aims and grievances. He wanted to hold talks in order to differentiate between those that could be talked into laying down their arms, from those that were just looking to cause carnage. After all, military option should be the last resort, not the go to option.

Did he insist on holding talks longer than he should have, despite mounting evidence of the futility of such an exercise?

But once the government launched the military option, he gave it his full backing, and he came out and even condemned the Tehreek-e-Taliban Pakistan (TTP) by name after this incident. There are several other prominent politicians yet to do so.

In ending the protests to present a united front against the extremists, even his harshest critics have come out to praise him for making a selfless decision for the betterment of the country.

In the past, Imran has been accused of making statements that give the perception of justifying some of the actions of the militants. I sincerely hope that he realises how erroneous that was and watches his words more carefully going forward.

There is a saying that actions speaks louder than words. That might be true, but words also matter; they can shape our thoughts, our beliefs and our actions. Words have consequences.

We, as a nation, are complicit in our inaction against those who incite hatred. We are a nation that has allowed convicted killers to be lionised. They have been treated as heroes in jails, with guards sitting in awe listening to them preach.

No more. There can be no effective change unless our whole society bands together and proclaims that we will no longer tolerate any apologists for those who carry out violence and those who seek to instil the seeds of discord or disharmony.

Were we really that naïve to think that allowing people to target and demonise minorities would also not lead to terrible consequences for ourselves?

“You can’t keep snakes in your backyard and expect them only to bite your neighbours. Eventually, those snakes are going to turn on whoever has them in their backyard.”

If you have a friend that spouts conspiracy theories, blaming Hindus or Jews instead of the Taliban, speak up against him. If during the Friday sermon, your local Imam does not condemn these militants and instead prays for their success, speak up against him. If you see people posting anti-Malala content and falsely accusing her of being a CIA agent, speak up against them. Just whatever you do, do not remain silent. The sensible ones amongst us have remained silent for too long.

If we are to have any meaningful change, there needs to be a systematic revamp of the way things are.

All madrassas and seminaries must be issued strict guidelines and rules about what can be taught there. Their sources of funding should be heavily scrutinised and their operations should be brought under government oversight.

All mosques should be licensed by the government. Appointments of Imams should only take place after a thorough background check.

The curriculum and syllabus of public and private schools should be reviewed. Any text that unfairly portrays minorities in a negative light or justifies any violence should be immediately removed.

We need to educate our children in love, empathy and compassion. If our generation cannot be changed, at least the next might be better.

We need to train ourselves to deal with frustration and conflict without always resorting to violence. Anything that makes us angry tends to lead to riots in the streets, with damage to property and loss of life. Has that ever really resolved anything?

Media channels should be banned from giving a platform to clerics of hate or to their apologists. There needs to be strict legislation in place to ensure that they comply. Anyone guilty of hate speech should be prosecuted and jailed. People far braver than I have argued over the merits of the blasphemy law, but what we could do is ensure that anyone found guilty of making a false accusation is severely punished and made an example of, so that no one ever thinks about abusing it.

Obviously, these are not easy tasks to implement, and the road ahead is going to be a long and difficult one. But we have to start somewhere. The cost of us doing nothing, of things remaining the same, is far too great.

Kenya mall attack, and how our leaders let us down in Peshawar