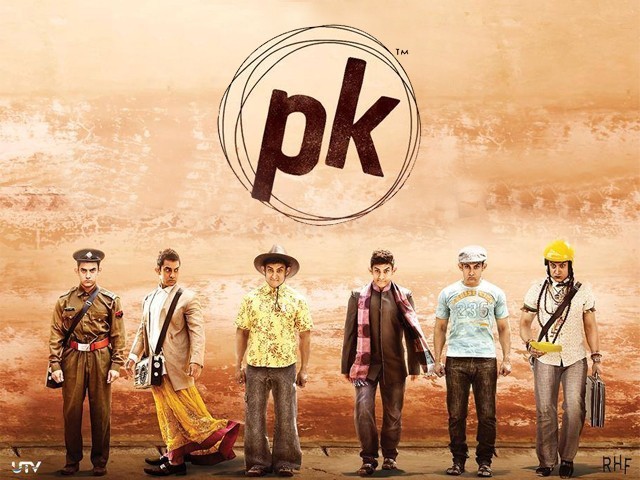 Everyone who watched PK, have fallen in love with the movie. PHOTO: PK THE FILM FACEBOOK PAGE

PK has undeniably been the most anticipated movie for the last few years. Apart from Aamir Khan’s fans, even film critics have been waiting to see producer Vidhu Vinod Chopra’s and director Rajkumar Hirani’s combination of magic.

PK revolves around a wide-eyed, rebellious yet innocent stranger in a city who goes by the initials of PK (Aamir) and the people he meets whilst exploring the new city. His journey starts from the middle of Rajasthan where he befriends a man named Bhairon Singh (Sanjay Dutt). Bhairon makes PK feel right at home but eventually, PK has to move on with his journey and so he moves to Delhi where he meets a journalist named Jagat Janani/Jaggu (Anushka Sharma) who is in love with a Pakistani guy named Sarfaraz (Sushant Singh Rajput). What happens next is what PK is all about.

PK is actually a satire on old myths and rituals. Contrary to popular belief, the movie or characters, by no means, mock religion or God – all PK does is ask questions no one has asked before. He is seen as a voice of wisdom and reason. The movie does, however, raise generic questions on religion with an added satirical element to it.

Aamir shines like the star that he is. He proves, yet again, why he has been bestowed with the title “Ace Khan”. This is by far the most atypical, tricky and inquisitive performance and no one else in Bollywood would be able to do justice to such a role. To me, he has carried the entire movie on his shoulders with immense gusto.

In her previous productions, Anushka Sharma came across as very… typical, bordering on stale, but with this film she has added a whole set of different elements to her performance; the result is mesmerising! Her performance was easily at par with Aamirs’ in some of the most intricate and difficult scenes. Her performance is definitely worth a hearty applause.

The movie is filled with cameos or more like, extended cameos. Sanjay is a delight to watch each time, and you can tell that, with Hirani and Chopra making him perform and excel, he was perfectly set in his own comfort zone.

Saurabh Shukla and Boman Irani gave some extraordinary performances as well, while Sushant is as lovable as ever with all his intense scenes coming across as very strong. Last but definitely not the least, was the surprise package in PK – Ranbir Kapoor! Watch out for his surprise appearance – as usual, the audience kept asking for more.

The screenplay, by Hirani and Abhijit Joshi, deserves applause on its own. The dialogues were witty, meaningful and provoked the audience to ponder upon multiple things. The direction, as expected, delivered as promised – first-rate.

Everyone who watched PK, has fallen in love with the movie. Exceptional performances, the thought-provoking storyline, brilliant camera work, the locations and other such factors are what make PK a must-watch for everyone, especially those who prefer performance and quality cinema.

PK is not just a one-time watch; it’s one of those films movie buffs would be proud to have in their libraries. Based on the captivating screenplay, worthy performances and overall entertainment, I am forced to give it a 4.5 out of 5 rating.