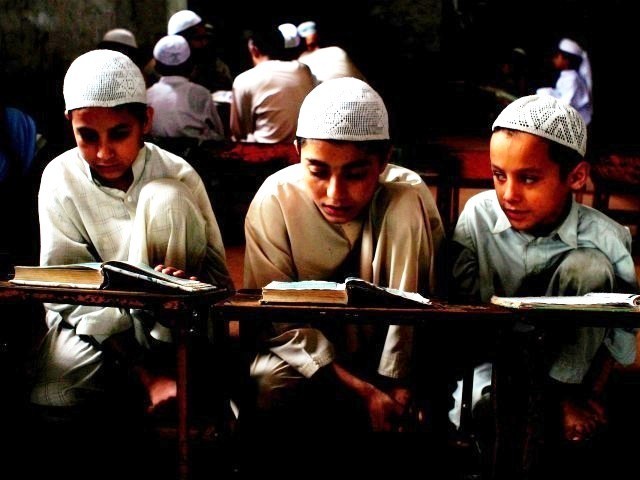 In my view, the enemy is not really the Taliban; it is in fact the passive ‘fascist’ and ‘terrorist’ in us all, which is resistant to change, especially when it boils down to discussions on the reformation of organised ‘Islam’. PHOTO: EPA/FILE

December 16, 2014, marked the Tehreek-e-Taliban Pakistan’s (TTP) deadliest attack in Pakistan. Militants from the TTP attacked an army-run school in Peshawar, killing 142 people; 132 of whom were children. Survivors of the attack are still being treated in hospitals.

Consequently, the prevalent government, army, opposition parties and the wider nation have joined hands against the ‘enemy’, that is, the terrorists. A firmer message than ever has been sent to the terrorists with the uplift of the moratorium on capital punishment in Pakistan, the signing of the death warrants for six terrorist convicts on death row, the Lal Masjid protest, the FIR lodged against Maulana Aziz and the expansion of the military offensive. Generally, the Pakistani nation has probably never been this active in person and on social media to condemn any such barbaric act; simply because the Taliban’s ‘conscience’ has hit an all-time low with the subjects of the attack being innocent children.

To give my two cents worth, this incident should serve as a rude awakening for Pakistanis to scratch the surface and dig a little deeper. For long people have considered only the persons responsible for the actual terror acts are ‘terrorists’, while in reality they are just the tip of the iceberg.

Active terrorist activities are a mere consequence of the passive ‘terrorist’ in us all. Pakistanis have, in general practice, what I call a passive form of ‘fascism’ in their approach towards everyday issues of religion, politics as well as socio-economic substance, thus providing a breeding ground for violent terrorists. Our authoritarian approach to preaching of organised ‘Islam’; our oppressive approach towards gender equality; our rigidity to breaking barriers on class structure; our opposition to diversity; our support for dynastic politics; our resistance to following policies and procedures; and all other forms of ‘fascism’ have encapsulated into a holistic ‘evil’ that has come to be known as the Tehreek-e-Taliban Pakistan today – the terrorists.

Various forms of passive ‘fascism’ and ‘terrorism’ are prevalent in different segments and demographics of Pakistani society. Whilst most Pakistani ‘Muslims’, men and women alike, are quick to declare Ahmadis as ‘Non-Muslims’, a majority of Pakistani men, ‘Muslims’ and ‘Non-Muslims’ alike, adopt a chauvinistic attitude towards women. Patriarchal culture in Pakistan has resulted in ever increasing violence against women.

While the majority of the Pakistani population remains silent on the barbaric killing of the minorities under the façade of the ‘Blasphemy Law’ (most recently the Christian couple case and infamously the Asia Bibi case), the so called ruling elites have not had the courage to pass a bill against such atrocious laws that negate the basic freedom to practice one’s religion ; even though they have the power and means to do so.

Whereas Pakistani Sunni Muslims demonstrate a strong reaction to violence against their fellow Sunni Muslims across the globe, reaction of this sect against sectarian killings of Shia Muslims has been relatively weak in comparison to a situation in which Sunni community feel that their religion is being insulted. For example, the strong and violent reaction in response to the publication of cartoons depicting Prophet Muhammad (PBUH) in a Danish newspaper.

Though the ruling elites have ‘generously’ been awarding compensations for the poor families who have been subjects of various natural calamities and terrorist activities, to this date no one has genuinely attempted to overhaul the systems and controls in place as it may threaten the powerful status quo of the feudal and the ruling classes.

All in all, we all have a burden of existential guilt on our shoulders when it comes to inhumane incidents such as December 16, 2014. However, rather than responding emotionally to the situation, we must objectively question ourselves on who the real enemy is. In my view, the enemy is not really the Taliban; it is in fact the passive ‘fascist’ and ‘terrorist’ in us all, which is resistant to change, especially when it boils down to discussions on the reformation of organised ‘Islam’.

Until this fixed mind-set towards the virtue of ‘Islam’ as the religion from God is addressed, despite the scale and subjects of terrorist attacks being innocents, a unified response to active terrorism would be difficult.

Taliban aspire to establish a Shariah compliant Pakistan. Their motivation stems from their belief that Islam has a universal, absolute and cosmic significance. In a similar fashion, most moderate ‘Muslims’ also fail to question organised ‘Islam’ by giving even the most illogical arguments a ‘Godly’ justifications.

In many instances this makes active or passive violence the only recourse – the violent defence of organised religions usually ascends from a sense of doubt in the very belief. In this sense the illogic of organised religions becomes their indispensable strength rather than a weakness as it is thought to be universal regardless of rationality and ceases to be personal – thus becoming part of the state.

As soon as a belief ceases to be personal and becomes organised into a religion, it becomes an official monolith that has to be defended either actively or passively. I believe it is the so called ‘moderation’ of organised Islam that provides a cover for dangerous fundamentalism in Pakistan.

Until we become flexible enough to be able to rupture the boundaries of resistance to reformation and evolution of organised Islam into a personal belief, I remain doubtful we will be able to convert our plurality into a coordinated and effective response to what we generally understand as ‘terrorism’.