Red is such an ugly colour on green 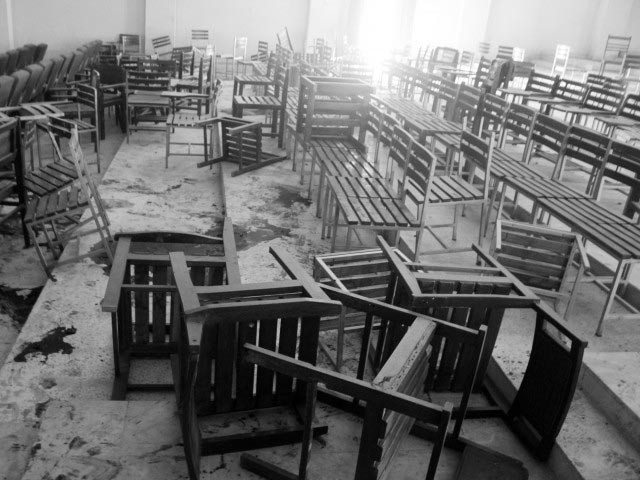 One of the classrooms of Army Public School where militants killed students. PHOTO: MUHAMMAD IQBAL/ EXPRESS

My Facebook timeline is black. It’s so black that every time a coloured photo appears on it, I am taken aback and even angered; how anyone can think of posting anything other than black?

Black is an appropriate colour for today. I think if grief and shock to the point of being numb would have a colour, it would be black. I want everything to be black; I want my mind to go black, and I keep trying to make it do so, but it insists on flashing bright red with images of the beautiful children of my country, murdered in cold blood.

They did the right thing, these children. Setting a fine example of obedience and discipline for the youth of our country; they donned their smart green blazers in the morning and went out with high hopes that perhaps one day their endeavours would bring pride to their parents and in turn, their country.

Big hands turn to cotton when it comes to defence against guns and grenades so what could little hands possibly do in protection against a hail of bullets?

No. They didn’t stand a chance. And the heinous, most low form of life, these terrorists knew as much when they went storming in to their school, apparently having never heard the phrase ‘pick on someone your own size’. But that’s what cowards do; they attack from behind and they choose someone weaker to torture.

I would love to say that we will avenge every drop of your precious blood and I would love to believe Prime Minister Nawaz Sharif when he says that you are like his children. Truth is that this act of depravity will not be the last one we’ll see. There will be a deluge of condemnations, protests, speeches and perhaps even sit-ins — but aside from your family, no one will remember your blood stained uniforms next year. There will be no museums for you and there will no movies made in your memory. You are 132 angelic drops in an ocean, and even if you were 1,032 drops, no one would care.

Nothing changes here, except the attacks gets more and more heinous and the silence in action that ensues grows louder and louder. It’s all part and parcel of being Pakistani, you see. We are children of a lesser God and our blood has no value.

Rest in peace my little angels, and enjoy all the attention being showered on you today, because you can rest assured that it won’t last beyond a week.