This was not revenge, this was murder without mercy 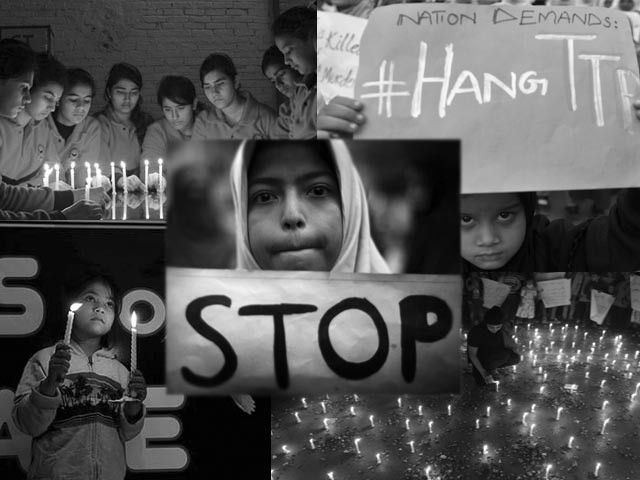 The day was filled with sadness, anger and reflection for me, as I am sure it was for many of my fellow Pakistanis and human beings around the world. PHOTO: AFP

From today, we can no longer be divided into groups and raise slogans for politicians. Today, we need to join hands and stand together as Pakistanis for the future of this nation.

The ‪‎Peshawar attack is another brutal example of the heinous criminals that infest our nation. As the death count rises, we are counting the bodies of dead children. Dead children, for God’s sake.

We must take this as a declaration of war by the terrorists on ‪‎Pakistan. They have launched a cowardly attack on our children; we must return it with the brutal force that our military possesses. We must deliver from the air and the ground, until the mountains of the tribal areas flow with the blood of the terrorists. We must avenge these deaths without restraint and without mercy.

We must avenge the deaths of the 148 souls that were lost two days ago, just for going to school.

We must rise… better, stronger.

It was 5am here in Karachi and the day was filled with sadness, anger and reflection for me, as I am sure it was for many of my fellow Pakistanis and human beings around the world.

Throughout the day, there were lulls when we Pakistanis were alone with our families and ourselves, in a time of quiet reflection, as the television continued to flash the gruesome images of the carnage that happened in Peshawar at ‪the ‎Army Public School (APS). Dead children scattered around school grounds, in classrooms and cafeterias, like they were waste to be thrown away.

No, they were not waste.

They were lives of future generations that were lost because people can’t get beyond themselves to fight what is staring us in the face.

There are many who are taking great joy in pointing out on various international newspaper websites, that ‪‎Islam is to be blamed for this violence, forgetting that hundreds of thousands of ‪Muslims have condemned these actions since 9/11. No, they haven’t forgotten. They choose to be wilfully blind to our statements. We can never condemn it enough for them to listen or understand.

No, they are blind to the carnage in whatever form, they are deaf to the cries of families mourning the loss of their loved ones and they are dumb in every sense of the word.

There are many who are taking great joy in the carnage that was carried out because they call it “revenge” for the North Waziristan military campaign. They are pretenders of Islam, not real Muslims in any shape or form. But our condemnation of them falls on deaf ears as they are the same breed as those taking joy in relating Islam to terrorism.

And then there are those who are broken in their hearts, minds and souls trying to understand what these poor children did to deserve this brutality. They were not part of any war. They were not carrying weapons. No, the only uniform they wore was one issued by their school and the only weapon they carried were the textbooks that would guide them out of darkness and into light.

But let’s be honest with ourselves. The attack was not revenge for the North Waziristan military operation. No, this was a continuation of the carnage that Pakistanis have lived with since 2005. The carnage that has taken 70,000 innocent Pakistani souls from their families, their friends and their country’s future. They were not wearing uniforms. They were not carrying weapons. No, they were innocents just like the children that were murdered in Peshawar.

They were not fighters. They were not warriors. They were not enemies of anyone. And today, you are celebrating their death with your statements. You are dancing on their fresh graves, washed in the tears of their families, because you are more important than these 132 innocent souls that are gone.

So please go back to professing your hate. Go back to spreading your lies. Go back pontificating on things you have no understanding of. Go back to your self-contained world where only you matter.

The rest of us, those who still cling to humanity, we are calling it murder because anything else would just be inhuman.

A recently published novelist and political strategist. He tweets as @AgencyRulesPK (twitter.com/AgencyRulesPK)

Good vs evil: Where does America stand?

Pervez Musharraf: Defending a patriot from cowards and liars