Good vs evil: Where does America stand? 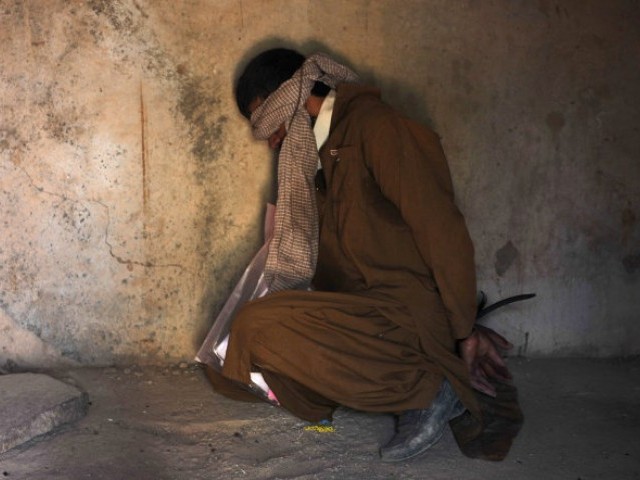 A detainee arrested by U.S. Marines sits at a military camp in Afghanistan in 2011. PHOTO: AFP

Having read through the 500-odd page US Senate report on CIA torture and all of its gory details, I can understand why the CIA, Pentagon and White House didn’t want this report to come out.

Remembering the international outcry over the pictures that were leaked from Abu Ghraib and Bagram, the US intelligence services knew the powder keg that they were hiding from the world. They knew what they had done were crimes against humanity and no amount of verbal discourse would make this acceptable, tolerable or forgivable.

There are two parts of this discourse that are disturbing to me as a human being. First, of course, is the report itself and what is still hidden from the public discussion. Second, and what is even more disturbing, is that in the face of these revelations, the Republican spin doctors have taken to television stations to defend their actions, as if it was actually necessary to implement these methods.

The summary report and what is still unknown

Most of the world’s media is talking about the 500 pages that were released for public consumption a few days ago. The conversation is centred on the abuses that have been exposed, and looking for answers to how this was allowed to happen and how they were all duped into believing that enhanced interrogation techniques were in the US’s greater interest and national security. Few are talking about the elephant in the room that has yet to be exposed.

The elephant concerning me, and all of you, is that this is only a 500-odd page summary report of a 6,700 page complete report, based on 16.7 million pages of de-classified CIA documents related to torture since 2002.

Take a second to think about that – 16.7 million pages of de-classified documents drilled down into 6,700 pages that the public will probably never see after the global reaction to the shorter summary report.

What is also worrying is that these tactics were used in a 1963 CIA program called KUBARK, which was used against everyone from Soviet double agents to Latin American dissidents. The 1963 program techniques were incorporated into the CIA interrogation manual, known as the Human Resource Exploitation (HRE) Training Manual, in 1983 and the officer in charge of the interrogations was elevated to the CIA’s chief of interrogations in the Renditions Group in 2002.

Had the summary report spoken of abuses such as sleep deprivation, beatings, electrocutions, or water-boarding, most of the world would have replied with a ‘been there, done that’. Most of the world watched these techniques in Hollywood creations like Zero Dark Thirty and 24.

Sadly, that was not what was in the report.

The report detailed abuses against 119 detainees – such a clinically neutral term – under the guise of gathering intelligence from them, that included forced rectal feeding, mock executions and burials, Russian roulette, threats of torture, murder and sexual assault against mothers, children and family members. I don’t want to get into the details of the tactics because they are so disgusting and inhumane that it would make your stomach churn if you had to read them. Suffice it to say that they found ways to abuse a human being that even the inventive scriptwriters in Hollywood couldn’t have imagined.

The summary report details extreme abuses that have long been called “enhanced interrogation tactics” by members of the Bush administration as the world demands to know which allies participated, facilitated and covered up the torture that has been exposed before the world. At current count, 54 countries are listed, including Afghanistan, Australia, Belgium, Canada, Egypt, Croatia, Germany, Hong Kong, Iran, Ireland, Jordan, Libya, Malaysia, Pakistan, Saudi Arabia, South Africa, Syria, Thailand, Turkey, the United Arab Emirates, the United Kingdom, Uzbekistan and Yemen. The list, according to the Open Source Foundation, is still not complete. The extent of their involvement is still unknown but it is fascinating to see that a list of US enemies included in the list of countries called upon to participate in torture on their behalf.

It comes as no surprise that it was Dick Cheney and George Bush who were the first to decry the timing of the report and repeat their claims that “all that was done was done in the name of national security”. Bush went as far as saying:

“We’re fortunate to have men and women who work hard at the CIA, serving on our behalf. These are patriots. And whatever the report says, if it diminishes their contributions to our country, it is way off base. I knew the directors, the deputy directors; I knew a lot of the operators. These are good people. Really good people. And we’re lucky as a nation to have them.”

I am sure that many Americans are thinking,

“When we have patriots like this, who needs traitors?”

The talking heads at Fox News repeatedly called America awesome, saying that this report is just an attempt to tell the world that America is not awesome.

It is interesting how the summary report details that the administration and Congress were misled by the CIA as to what was happening in these deep, dark holes, referencing an internal email in July 2003 that states that the White House was extremely concerned that Secretary of State Colin Powell, a professional soldier of unquestionable standing, “would blow his stack if he were to be briefed on what’s been going on”. As well as an April 2006 CIA briefing where then-president, George W Bush, expressed discomfort at a photograph of a “detainee chained to the ceiling, clothed in a diaper, and forced to go to the bathroom on himself.”

Nor do any of the spin doctors want to admit that they hired two psychologists, Jim Mitchell and Bruce Jessen, to develop, monitor and evaluate the effectiveness of the torture program. Now, that is American oversight. The same people, who developed the program, evaluated the effectiveness of the program to the tune of $81 million of US taxpayer money. In some cases, they were even watching the interrogations, giving instructions to the CIA interrogators.

The psychopaths who defend the torture program will not admit that 29 of the detainees were actually completely innocent of all charges. Nor would any of them like to admit that no credible or actionable intelligence was gained from any of those who were tortured; no information leading to the capture of Osama bin Laden; no information that averted any impending terrorists attacks. Nothing.

Yes, I know that the Taliban and ISIS are brutal, but when you lower yourself to the same brutality, are you really better than them? Are you giving the world a standard that they can respect and support? I remember one analyst saying that “at least we didn’t behead them”, as if they were any better than the animals that they are fighting against.

Will America prosecute those who were involved in the torture of these people? All indications point to a resounding no.

Does that mean that other countries will not prosecute those who were involved? No.

As a matter of fact, George Bush is so fearful of being charged that he cancelled a scheduled trip to a conference in Switzerland because he felt that he would be arrested on war crime charges. Under the 1991 United Nations Convention Against Torture, to which the US is a signatory, prosecution is the only way to prevent future cases of torture. It clearly states in Part I, Article 2:

“All acts of torture be prosecuted.”

“[N]o exceptional circumstances whatsoever, whether a state of war or a threat of war, internal political instability or any other public emergency… as a justification of torture.”

It is a further shock that prior to the release of the summary report, the head of the American Civil Liberties Union (ACLU), Anthony Romero, wrote an op-ed piece in the New York Times, arguing that Bush and all the torturers should be given a presidential pardon, which was categorically renounced and attacked by fellow attorneys and human rights campaigners. Baher Azmy, legal director of the Centre for Constitutional Rights which has represented numerous torture victims, wrote that a pardon would “compromise our fundamental rights”. International law professor Kevin Jon Heller wrote that a pardon would allow them to “continue to believe that they did nothing wrong”.

There are many questions that will continue to hover over this report, many things that still have not entered public discussion and many answers that will need to be sought before this can be put to rest. There are, however, a number of things that need to be said.

This is the same country that has stood idly by as “a friendly Middle-Eastern ally” bombed defenceless children, hospitals and schools in the name of stopping one group they consider terrorists. This is the same country that, post 9/11, branded every Muslim in the world a terrorist. They later changed the terminology to Islamist, which is just as offensive because it connected the most radical elements to a religion that has over 1.6 billion followers.

It’s been great marketing and public relations that have kept the world from knowing the history of the country – to get to which many will sell all their belongings and undertake the most dangerous of circumstances just to stand on American soil. Hollywood has done a wonderful job of projecting an image of an America that claims to be the land of the free, the home of the brave and the land where equality is given to everyone, regardless of race, creed or colour.

There was a time after World War II that the United States executed Japanese interrogators for performing water-boarding on US soldiers. There was a time when the United States stood in front of the world and demanded that a war crimes tribunal be created to deal with those crimes that were so heinous that they could not be tried in normal courtrooms. So heinous that they were elevated beyond the Geneva Convention to be called crimes against humanity.

Today, the same United States that has always projected itself to be the world’s policeman, the defender of liberty, democracy and the rule of law, and the land of equality, stands refusing to be judged by the standards that they created for the rest of the world.

The reality is a well-hidden truth.

Today, many Americans and world citizens are trying to reconcile the image they have of the United States and the gruesome, brutal truth that they have been shown.

As one journalist puts it,

“To defend democracy, we had to destroy it.”

A recently published novelist and political strategist. He tweets as @AgencyRulesPK (twitter.com/AgencyRulesPK)

This was not revenge, this was murder without mercy

Pervez Musharraf: Defending a patriot from cowards and liars