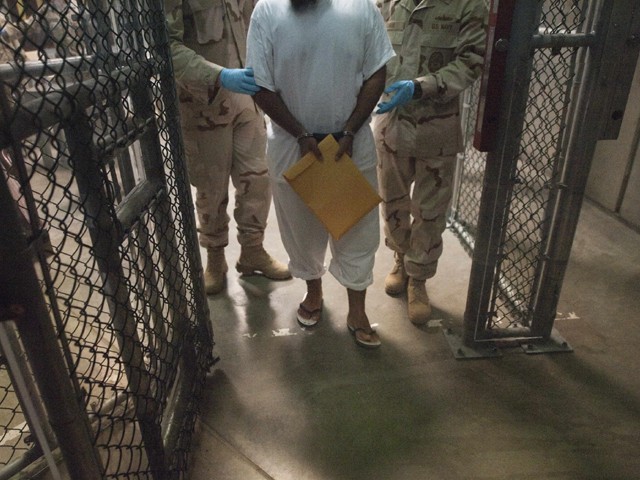 I was enraged by the fact that the CIA returned him to us informing that he was wrongfully held for mistaken identity. PHOTO:AFP

My father went missing while on a market errand three years ago. Our wait for him was endless. The law enforcement authorities were approached to find him. Days after filing a missing person report, we were contacted by someone in the government that he was in the custody of the Central Intelligence Agency (CIA) and was fine. We were told that he’d return soon and was just being interrogated for something.

I was just 10-years-old at the time. I hung on the hope that he’d be back in a few days. But those around me, especially my family, didn’t think so. I remember my mother weeping in fear, my elder siblings cursing the ‘system’, all the while I couldn’t understand why. Perhaps, I was too young to know what life would be unfolding for me in years to come.

Dad didn’t come back in a few days.

He came back after three years.

The man who entered the main door of our house to jovial cheers and shrieks was not my father. He was someone else. He looked like my father. But that’s just about it. Everything else was different about this person whom I was to hug and say “welcome back!”.

This man was 35, yet he looked 50. His rugged face and empty eyes made me think of the war soldiers from the movies I had seen. My father was a high-spirited, cheerful person. This man was quiet, frail and looked very timid. At dinner gatherings, he’d hide away in his room. When we’d go out, he’d always be looking over his shoulders. It seemed to me that he felt as though someone was watching over him. I’d look around and there would be no one. So what was he so afraid of?

One day, we had some guests over. A cordial discussion was taking place between all of us when out of absolutely nowhere my father burst into an angry barrage of vernaculars and insults in rage that I had never associated with him before. He didn’t even care if there were kids my age in the room or not. As alarming as this was, the worst came when after two months of finally having him back and trying to make sense to the pertaining madness, my mother packed all of our bags and said that we’d be moving out to stay with our grandparents. Certainly, something between mom and this person I was supposed to call my dad had happened.

I couldn’t understand what was happening. My grades in school started to drop. I started becoming anti-social. And I certainly didn’t want any one of my friends to meet my dad. But there was an ache in my heart. I wondered whether it was better when he had just gone away for three long years or this mortifying everyday nonsense I had to face with him being around. I was afraid of my own father. I had heard whispers amongst the elders that dad had gone through a ‘rough patch’ during the three years that he was away, but that didn’t help me understand my ache. I just wanted my happy-go-lucky dad back; the one who would pick me up and swing me around back. I wanted my father who would help me with my homework, tell me bedtime stories of giant sized strawberry cakes in a land of fairies and butterflies, to return. It was at this point that my ache for dad was amplified. I wanted to know what had happened to him. I certainly couldn’t ask him so I had to find out on my own.

One night, I shut everything off in my mind and started digging into Google. I punched in keywords like, “CIA”, “interrogation”, “abduction” etcetera. Ultimately, I was led to the term, “CIA torture”.

What I found next didn’t left me mortified.

My father had been subjected to “torture”.

It wasn’t before this search that I understood the full meaning of the word torture. I didn’t realise that torture was cruel, barbaric and inhumane acts. I had heard about the holocaust, and the methods adopted back then, but that was so long ago, I didn’t realise that could exist anymore. Things I saw and read about were unfathomable.

I dug in deeper.

My father had been accused and held by the CIA for a mistaken identity case. He had been confined into a small coffin for 266 hours. 266 hours. Not seconds, not minutes. But hours. He had been subjected to rectal feeding and hydration. He had been stripped naked and shackled in a standing position for more than 72 hours. After being clubbed and beaten by other blunt objects, an ice bucket filled with ice cold water was thrown at him. He had been threatened that if he didn’t comply, the heads of his family members would be served to him. As I read through, the still images from the movie “Ghosts of Abu Gharaib” flashed across my mind. I shuddered with every passage I read and with haunting images from the movie flashing through my mind. They did this to the man who birthed me, clothed me, raised me; a man I love, a man they took away from me wrongfully and tortured.

For three long years, my father was subjected to brutality that was unthinkable. And then the CIA had the audacity to tell us that he was wrongfully held due to mistaken identity? I was enraged. I wanted to avenge my father and all those who have been dealt with by the CIA in this barbaric manner. But I know I cannot. For if I do, my life is at stake.

What is even worse are some of the other facts I found. Facts that very few of us know.

The practice of torture goes beyond the holocaust and what the CIA is capable of. The US is not the only country that should be held accountable for torture. Despite international conventions against torture, it appears to be one practice widely used by many countries. Various countries have been blamed for collaborating with the CIA and other agencies that exercise torture.

In the past 20 years, nearly all countries have been held accountable of some type of torture practice. What is shocking is that vast majority of them have signed (166) and ratified (156) a UN Convention against Torture and Other Cruel and Degrading Treatment or Punishment as can be seen in the map below. This map was last updated on December 2nd, 2014, by the United Nations (UN).

Why have nearly all the countries, on the map shown above, ratified the treaty and yet have allegedly violated it? An explanation could be that even though it might not be difficult to ratify a UN treaty, it is not difficult to disregard it later either. This may be because the UN doesn’t have the power to enforce fast acting punishments, and in a few of the states that are accused of torture like the US, China and Russia, they happen to be permanent members of the UN Security Council that could enforce sanctions. Moreover, there’s a matter of perception also. George W Bush, for instance, made it a point to refuse the description of CIA techniques of interrogation as torture while he was president.

The double standards practiced by Bush though, are appalling. During a State of the Union address, he spoke of the horrifying torture techniques used by Saddam Hussein. Iraqi tortures that comprised of burning with hot iron, administering electric shock, rape and acid. Bush also stated that Iraqi children were tortured by the Iraqi government to have their parents confess to their crimes. He concluded that address by saying,

“If this isn’t evil, then evil has no meaning.”

I ask the government today the same thing.

If what happened to my dad isn’t even, then what is?

Links upon links, stories and headlines all screamed the same thing to me; torture is rampant in this world of ours. The top 10 nations which have been receiving US foreign assistant in fiscal year 2014, all practice torture and are liable for some of the most intensive human rights abuses. The report’s conclusion stems from a mixture of projected foreign assistance figures from January 2013 carried out by the Congressional Research Service. The report took its findings on torture that was independently reported by Human Rights Watch (HRW), Amnesty International and a few other human rights organisations. The report suggests the following countries and their expected assistance (in millions of US dollars):

Israel is the top recipient of financial aid from the US. It has been accused of committing intense human rights abuses over the last one year, which also includes the torture of Palestinian children. A report by the Public Committee Against Torture in Israel (PCATI) suggested how children were detained for “suspected minor crimes” while they were sexually assaulted by the Israeli security forces and were also kept in outdoor cages during harsh winters. 74% of Palestinian child detainees experienced physical violence while they were arrested for interrogation.

The recent media reporting on harrowing excerpts from CIA interrogation reports send shivers up my spine. This was a reality I did not know existed. A cruelty my mind refused to come to terms with. I couldn’t understand how another human being could be so devoid of humanity. I couldn’t understand it until today. Until now when a strange man, said to be my father, has walked back into my life. My father was deprived of basic human dignity. Basic human rights. All human rights.

But what does ‘human rights’ mean anyway? What impact does it have? Apparently torture has been in practice since before the holocaust. Everyone has known about it, yet no one said a thing.  Human rights are compromised on a daily basis at places like Guantanamo Bay, yet it is still functional. My dad was tortured. My father. It could have been your father, you know. I don’t even recognise him anymore. And yet, knowing all of this, we continue to sit here like lame ducks. We aren’t humans. We are all animals. The CIA is the worst kind. And I will never forgive them for what they did to my father. I cannot ever forgive them.

I just hope we can make it stop. It is not a pleasant feeling to sleep with at night, knowing that a member of your family or a member of someone else’s family is being treated in this way. I can’t sleep. How can you?

The anger inside me won’t stop mounting; I can’t make it stop. How do you control it?

The images in my head won’t go away. How do you stop it?

A teenager whose father was wrongly accused and tortured beyond imagination. A teenager who sees medieval torture practices taking place all over the world, yet hears no voice of outrage to stop it.

*This is a fictional narrative of a reality that has taken place.