If you are the US, you can get away with anything. Even torture. 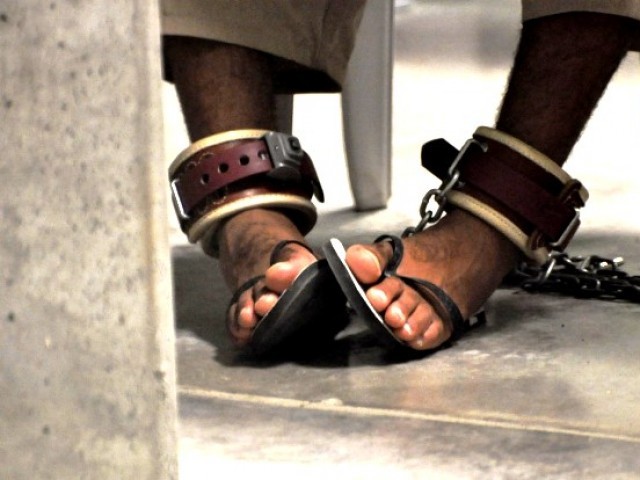 A Guantanamo detainee's feet are shackled to the floor at Camp 6 detention center, at the US Naval Base, in Guantanamo Bay, Cuba.

States exist for their own well-being. They have their self-interests. Domestic and foreign policies define and dictate state acts and omissions on the world stage. In the post 9/11 order, state-to-state interaction has undergone an incredible amount of change with the entire gamut of international relations now at the mercy of a few role players. The United States of America, of course, holds the centre stage, in a global effort against the spread of religious fanaticism and waging a war on terrorism.

That being said, the recently released report detailing the US Central Intelligence Agency’s (CIA) tactics of interrogation after September 11, 2001, has rocked the Washington political scene. The reaction has been one of shock and awe. Tremors have been felt far and beyond US boundaries with mixed feelings expressed by American allies as well as adversaries.

The report is a culmination of the Senate Intelligence Committee’s five-year effort of reading and analysing more than 6.3 million pages of CIA documents to assess the CIA’s use of “enhanced interrogation techniques” in the post-9/11 era. That review produced a more than 6,000 page review that was condensed into a 525-page summary which the committee released on December 9th. This delivered a brutal assessment of the CIA’s practices.

The release of the report took six long years of haggling between the CIA and the White House. A lot of back and forth took place essentially about managing the dissemination of information. Those six years were spent on walking a tight rope and trying to contemplate on either exposing too many or too few details to the general public. The end product, as we see it, has been blanked out at several places so that national security interests are not jeopardised. It mentions a series of events, torture strategies, sessions and investigations carried out by officials, providing a graphic description of how detainees were treated.

Not much needs to be said about the content of the report. We all know that whatever has been disclosed is a ‘bunch of crap’ not in the sense that Dick Cheney described it, but it is literally filled with gross and nasty, inhumane stories of lives and bodies of people being played around with and mutilated, both emotionally and physically. Pages after pages are filled with narration of complete violation of human dignity and values that are critical for the existence and survival of a civilised society.

Other than Cheney’s outrageous response, the report hasn’t been received favourably. Yes, there are some like Sam Harris who feel that torture is a legitimate weapon and hence can be liberally employed to extract information. Obviously, Harris has his own set of ideas and arguments to support his contention, which, to my mind, are based on the good old, Machiavellian, fear tactics used effectively by John Ashcroft and company. They have undoubtedly worked at the expense of taking away trust and tolerance from different pockets of the American society.

Michael Hayden, the former CIA director, has come out from the shadows to defend the torture methods as well. Hayden was an important part of anti-terrorism strategy during the George Bush White House years. Additionally, right wingers like Rush Limbaugh, are having a field day, trying to punch down the report’s credentials left, right and centre in an effort to prove that a no torture policy is not acceptable.

Current CIA Director, John Brennan, addressed the Senate torture report in a live press conference on Thursday, December 11th. He defended his agency, saying that after 9/11, those involved operated with national security in mind, but admitted,

“The CIA was unprepared to conduct a detention and interrogation program, and our officers inadequately developed and monitored its initial activities.”

The one sanest voice that came across was that of Dianne Feinstein, chairperson of the Senate Intelligence Committee. The senator from the state of California declared that the torture tactics were ‘a stain on our values and our history’. Ms Feinstein found an unlikely ally in the Congress, Senator John McCain, a republican from Arizona. McCain, a torture victim during the Vietnam War himself, vehemently criticised the use of blatant procedures and believes that torturing detainees will only be detrimental to US efforts to stem the growth of religious fundamentalism.

For countries like Pakistan, that have been at the forefront of the war on terrorism, the report is a reconfirmation of the fact that Pakistani nationals, handed over to the US over time, were mishandled in the worst possible ways. While the government has always faced stiff public opposition, pressure and questions regarding the support are bound to increase. Apparently, the US has now come up with an explanation to calm the Pakistani emotions down by assuring the government that it will not indulge in nefarious tactics on detainees that violate international humanitarian precepts. Needless to say, such assurances can be nothing but hollow promises.

Nations like Pakistan before handing over their citizens, must do some homework rather than blindly putting their own people at risk. This is something for the Pakistani leadership to think about. Granted that Pakistan has proven to be the breeding ground of terrorism, yet, it appears that investigation processes lack clarity, and better vetting should be done prior to branding anyone a ‘terrorist’.

The CIA report is bound to bring to light other policies pursued by the US. Use of drones has been questioned in the past. Such questions are being discussed even more actively now. Is the usage of drones to target terrorist hideouts even working or is it only adding to the list of problems and enemies for the US? The fact that drone attacks in various parts of the world, such as Afghanistan and Northern Pakistan, have ended up killing thousands of innocent civilians only means that more and more victims now want to seek revenge. Families, clans and, in some cases, entire villages have been rendered dysfunctional by the dreadful drones.

Now that the cat is out of the bag, the CIA report has shed doubts about America’s commitment toward democracy and democratic values. While the US touts itself as the great defender of freedom, it has proven itself to be one of the worst aggressors in world history. It is a setback for those who had abundant faith in the spirit of liberty that this country stood for. Hard working, peace-loving immigrants come here seeking livelihood, peaceful coexistence and freedom from want and persecution. At the global level, anti-US forces have pounced on the opportunity to criticise Washington and condemn its double standards. The CIA report is nothing but a stigma, a scar that is almost impossible to get rid of.

Since I’m at it, I’d be missing out on an opportunity to reflect on something that has nagged me for a while. And, this is the TV show ‘Homeland’ – a sad, pathetic and distorted portrayal of facts. No one expects Hollywood dramas to be perfect but ‘Homeland’ is one hell of nonsense that tests the patience of even the most tolerant and less-sceptical minds. Unlike what the show depicts, CIA, as the report in question proves beyond doubt, is no friend of humanity. Perhaps it is time to scrap the show and come up with something that is closer to reality.

All things considered, this CIA report is no flash in the pan or a social media gimmick making rounds of the freaky internet. It is not an account of a one off, coincidental occurrence that took place, and hence we roll with it and let it go.

Torture is an institution in the US.

The report shows that CIA and torture are close like salt and pepper. This is about real life and the real destruction of it. Worst of all, as the document makes it clear, the irony of all this is that the results of all the torture inflicted on the detainees did not even produce the desired results.

Even worse, the US has lost the high moral ground that it occupied not long ago. The bare-knuckle approach did not go down well. That good guy, friend of humanity image has been chopped into pieces, disintegrated into the ground. All we are now left with is a tough guy, Cheney, gun totting, bomb dropping, image that’ll not help make any friends at a time when the US is in terrible need of friends.

Getting the report out doesn’t necessarily change the ground reality that the US has acted as an international bully. Washington needs to do a tremendous amount of damage control. Current US policies do not auger well for the future generations, not only domestically but they have a negative universal impact. It is, however, a matter of appreciation that unlike many other countries of the world where brutalities carried out on enemies are never disclosed, the US has a transparent system, enough to acknowledge its blunders and blemishes.

Now that we are done with the process of identification and acknowledgement, this is the time to start making amends. The root to the fruit, as they say, is to rediscover the sense and spirit to do well, act smartly, and persevere and pursue policies that are humane and just. Over-ambitiousness will no longer work if the US plans to continue playing a leading role in the comity of nations.

On a personal note, this writer still has hope.

Yes, I felt a sense of betrayal last week when the report came out. Yet, I believe that the US lost its way momentarily and will be back on track if thorough steps and measures are taken.

Having spent the best years of my life here, I know that this country is all about justice, fairness, equality and strong values. I can attest to the fact that there are an incredible number of good folks here that do good and encourage others to do the same. Yes, Washington is a nasty place but politicians and policy makers know and understand that this torture episode has pushed the societal consciousness to its limits. There’s no more stretching or flexing of muscles. It is time to contemplate and let peaceful tenets and beliefs overpower the obsession to hurt and kill.

The CIA report is a hyper distortion of the ideals and values that the US stands for. No matter how much the protagonists try to justify the procedures related to tortures, the fact remains that the US is capable of conducting business in a much better, effective, tactful and respectable manner. Cooler heads need to prevail. There’s no other better way to fix the systemic aberrations.