Dear Pakistan, let America and Saudi Arabia fight over oil prices because it works in your favour! 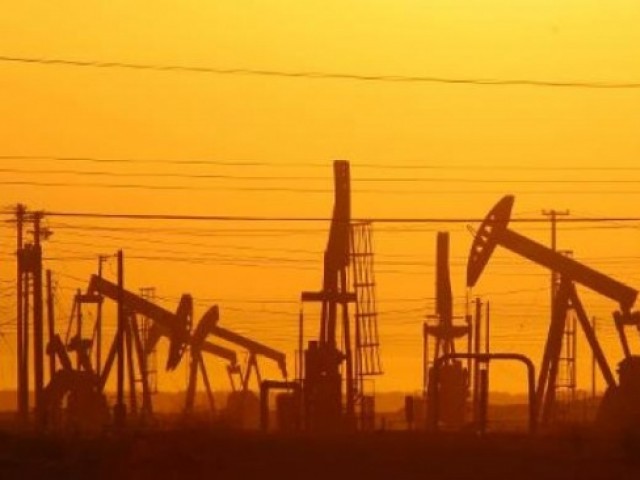 The economics of oil is seldom disassociated from global politics, but the production landscape has changed forever. PHOTO: AFP

Oil prices are way down these days. Crude oil prices have fallen by more than $50 per barrel in international markets in the last six months. From $115 in the middle of June, 2014, the price of a barrel of crude oil has fallen to $65, as of the second week of December.

On November 27, 2014, the prices took a definitive downward turn when Saudi Arabia – the largest and strongest member of the Organisation of Petroleum Exporting Countries (OPEC) – refused to mitigate production. And since none of the other OPEC nations are cutting back, there isn’t a way to eliminate the current two million barrels per day of excess supply from the market.

Without the excess supply being addressed – and with China and European economies still struggling to return to robust growth rates – there is essentially a glut of oil in the global marketplace with producers cutting prices to retain market share.

The excess supply has resulted largely due to America making strides in oil drilling. From being the largest importer and the largest consumer of oil, the United States has also steadily become the largest producer of oil.

Yes, you read that right.

The US was the largest producer of oil – generating more than 12 million barrels per day – in 2014. That is an average daily volume ahead of Saudi Arabia and Russia. Americans have been extracting oil from shale rock using hydraulic fracturing or ‘fracking’.

The oil interests of Saudi Arabia and United States are currently at odds. Saudi Arabia is calculating that sustained lower oil prices below $70 will discourage American oil producers from drilling more wells, since shale rock is only viable when international crude oil prices remain above $70 per barrel. Saudi Arabia loathes the idea of giving up its US-based customers to domestic producers. So, for Saudi producers, to increase prices through OPEC by cutting supply would end up playing into the hands of its US competitors.

A boon for Pakistan

Let’s be unequivocal about this: Falling oil prices are typically good for consumers and their household budgets the world over. The less you spend at the pump, the more you have available as a household to spend on other consumables.

It’s almost like a free stimulus to the economy, allowing funds to flow towards consumer spending by families instead of wealth creation by oil interests. Consumer spending, of course, generates a virtuous cycle of spending within an economy, whereas oil interests only end up hoarding those extra profits.

According to the Organisation for Economic Cooperation and Development (OECD), a $20 drop in price adds 0.4 percentage point to growth in global economy. With a $50 drop since June this year, we can expect a full percentage point increase in global GDP next year, if the current oil prices sustain.

Here are some key benefits that Pakistan should expect from the falling oil prices:

Countries like Pakistan, India or Bangladesh, that rely on agriculture stand to gain the most from the on-going oil price war between OPEC and the US. Farmlands tend to be even more energy intensive than manufacturing. According to the World Bank, a dollar’s worth of farm production could take up to five times more energy to generate than a dollar’s worth of manufactured goods. So the cost of farm production in Pakistan should go down as well with the oil prices.

At current price levels, Pakistan alone could save more than $5 billion over the next year in oil imports – a much-needed boost to its foreign exchange reserves. In 2014, Pakistan paid an average of $108 for about half a million barrels a day that it consumed during the fiscal year. Contrast that with an average price of $65 for crude oil in fiscal year 2015 and the savings could be phenomenal.

Falling oil prices should help to curb some of the rampant inflation, by not just reducing prices at petrol pumps but also by helping to keep in check the costs of manufactured goods.

Diversified economies of oil producing nations, like the US, Mexico, Norway or Canada, benefit from falling oil prices too. Although the oil-drilling sector faces price and margin pressures, their consumers on the other hand save money each day in gasoline purchases.

Not all economies will benefit from falling oil prices though. The impact of lower prices could begin to take a toll on the stability of some producer nations. Quite a few OPEC and non-OPEC nations could struggle with their budgetary commitments. Iranian budget, for example, is based on oil being at $136 per barrel. Russian budget is based on oil being at $101. Nigeria and Venezuela need oil prices at $120 to meet their fiscal commitments.

With oil currently at under $65 per barrel, those nations will have to find either alternate means to fulfil their budgetary commitments or simply have to dip into their sovereign funds.

Saudi Arabia, on the other hand, is poised to wage a price war, thanks to a $737 billion sovereign fund. It can tap into its reserves if and when needed to meet its budgetary obligation. UAE and Qatar have similar deep reserves to see this price war through.

Lower oil prices serve a double whammy for Russia as well. The country is already reeling from the economic sanctions placed on it by the international community – and the resulting flight of capital – due to its invasion of Ukrainian territory. Rouble is down 40 percent against the dollar this year. Will Russia reassess its global ambition in view of the energy scenario?

The economics of oil is seldom disassociated from global politics, but the production landscape has changed forever. With improved drilling methods, lower cost of production, and increasingly accurate exploration, the cost of oil should remain lower in the long run. Add to it the divergent interests of the three largest producers – the US, Russia and Saudi Arabia – and consumers should stand to benefit in the long run.

After years of expensive oil, falling prices are a well-deserved respite for consumers. Nothing wrong with a good old-fashioned price war between major oil interests – however long it lasts.

The writer is a Pakistani-American who lives and works in the United States. He tweets @nader_nanjiani (twitter.com/nader_nanjiani)