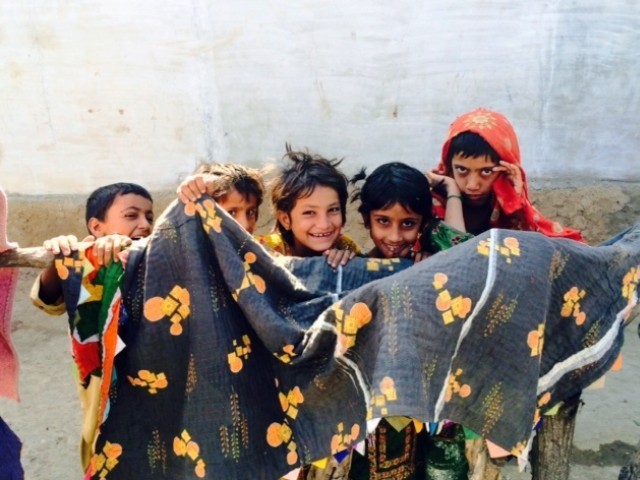 Countries poorer than Pakistan have launched social protection schemes which are unheard of in our country. PHOTO: WAQAS RAFIQUE

Contagious peals of laughter dissolved the silence that my cameraman Wilson had requested in the small village hut made of clay and bush with a ceiling of dried palm leaves, as Sajida candidly described how she could feel her baby, expected to arrive in a few months, kicking inside her.

She belongs to Muhammad Ali Jhokio, a village of about hundred households, approximately 15 kilometres from Thatta. There are many other villages in the 29 union councils where the United Nations World Food Program (WFP) is running the Stunting Prevention Project with the Sindh Department of Health.

These efforts have become part of the scaling-up nutrition movement, also maintained by the UN, with the aim to prevent stunting in children of up to 23 months, using micronutrient powders to reduce deficiencies and reduce low birth weight. The idea is to address children’s nutritional needs in the first 1,000 days of their lives – starting from the foetal stage.

My previous experience of working with communities in Balochistan, Khyber-Pakhtunkhwa and even South Punjab taught me that if we want to do a story about their women and children, it is almost mandatory to have a female colleague along. So it was nothing but a rare privilege to find myself sitting right next to this woman while she described the foetal movements.

In this particular village, the focus is on 25 pregnant women who are registered with the UN field staff. Sonia Rajput, who reaches out to the community on behalf of the UN, told me that in addition to these pregnant women there are around 45 children who are being monitored against malnutrition.

It is very clear that to ensure lasting health of these innocent villagers, it is important to take care of the pregnant mother. This becomes a challenge given our culture where it is common for the woman to eat only after she has served and fed all her family members. Remember, families in rural areas aren’t small; they are bigger and require a larger amount of food.

Sajida, however, is luckier. She doesn’t have a large joint family set up. Instead she lives with her husband and two children. Plus she has the added advantage of being educated up to the eighth standard. So, naturally, she was more aware and curious about the well-being of herself and her family and was more open about her condition.

Unlike other village folk across Pakistan who in the beginning always doubt the intentions behind fortified food and vaccination provided by foreign donor agencies, mainly thinking they would end up being infertile or impotent if they took such advice, she openly and willingly took to these helpful practices and has developed a bond of trust with the lady health workers. A strong sense of community prevailed which reflected on the faces of the bashful smiling womenfolk in the village.

Interventions such as these are useful indeed to set good examples but we know and these development agencies know that these efforts can never be enough. Every year the development sector launches reports that bring to light data and information that highlights how vulnerable Pakistan’s population is. The fact that Pakistan stands 146th in the category of low development countries, according to a UN Human Development Report launched earlier this year, should be enough to give sleepless nights to those in power in Pakistan.

But it seems those who should read these reports do not have the time to do so. So, how true are these people to their job? The answer lies in the fact that half of Pakistan’s population is malnourished; a population whose well-being is the responsibility of the government and these people of authority.

On our way out of Muhammad Ali Jhokio, I asked my colleagues a simple question,

“So, what happens after the 1000 days of meeting the nutritional needs of these children under this WFP projects are over? How and who will ensure that the hard work and effort to provide these children with a good foundation for good health will last?”

No one was sure.

Countries poorer than Pakistan have launched social protection schemes that remain unheard of in our country. The lack of a local government structure in the country, even after the 18th Amendment, has a large role to play in these disappointing stats. We cannot afford to ignore the importance of alleviating poverty and elevating the living standards of these people.

It’s true that every country relies, to a certain extent, on donor reports and their project interventions, and while we should be grateful for such help, it is unreasonable and impractical to depend solely on this help. Perhaps it is time for us to get our own hands dirty and do some heavy lifting for ourselves.