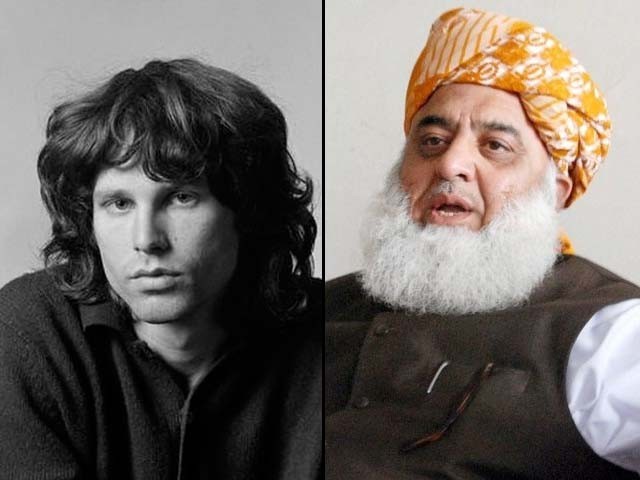 Not talking? I have made Nihari for my Fazloo today. It is so spicy, he will start screaming.

Paris: Chief of his own faction of Jamiat Ulema-e-Islam (JUI-F) Maulana Fazlur Rehman visited the grave of Jim Morrison at the Père Lachaise Cemetery here on Thursday.

Fazl embarked on the spiritual journey to the City of Love after hearing about the scrumptious pork chops at Hard Rock Cafe Paris from his long-time peer, friend and chief of his own faction of Jamiat Ulema-e-Islam (JUI-S), Maulana Samiul Haq. Though Fazl thought Sami’s opinion of the chops was hyperbole, he did particularly enjoy the dry martinis the blonde bartender served him every seven minutes.

When leaving, Fazl tipped the bartender generously and scribbled his hotel’s name with a $ sign at the back of the cheque, according to documents available with Khabaristan Times. Whether the bartender took up the offer could not be confirmed till this report was filed.

After the modest two-hour meal at Hard Rock Cafe, Fazl said he felt even more in touch with his spiritual self.

“Keep your eyes on the road and your hands upon the wheel,” he told the cab driver before heading towards the destination that, unknown to him at the time, would change Fazl’s life forever.

“There’s a killer on the road,” he added, just as an afterthought.

Fazl was reported to be swooning in uncontained ecstasy as soon he got to the cemetery’s entrance. Removing his turban as a sign of respect, he wept as the tears rolled down uncontrollably before they were hungrily absorbed by the dry, bushy beard which too seemed to have grown graver at this juncture.

“Words cannot describe what I feel. But if you have read the book, you will know this life and this world are only temporary,” the JUI-F chief had said in a barely audible voice.

Experts said the book he was alluding to is The Restaurant At The End of The Universe.

According to members of his entourage, Fazl spent several hours at the grave of the enigmatic frontman of The Doors, kissing the tombstone and bawling hysterically.

“He is a changed man,” confirmed one insider who tagged along only after Fazl assured him of getting a hotel with Muslim showers.

“I had to talk him out of getting the tattoo of Madonna removed from his left thigh. As believers, we must live with the choices we make. Unless of course, you are a woman; there are several treatments and medicines that restore their virginity,” he said in a brief chat over the telephone before disconnecting the line after letting out what was a combination of a grunt and a moan.

Fazl himself has only managed to utter a few incoherent phrases since visiting Morrison’s grave. There seems to be some alarm as to when Fazl will fully recover from this emotionally draining experience, but doctors are of the view that he will be able to speak clearly very soon.

“Not talking? I have made Nihari for my Fazloo today. It is so spicy, he will start screaming,” Fazl’s third and youngest wife Amina* said with a shy smile on her face that was hidden behind a veil.

When asked if she felt jealous of Fazl’s fascination with Morrison, Amina replied in the negative.

“Women of character are not so weak. ‘The time to hesitate is through, no time to wallow in the mire,’ is what my husband always says. As his baby, the least I can do is light his fire.”

*Name has been changed to protect the victim’s identity.

Unnewsworthy is an incompetent journalist trying to change the world one headline at a time.