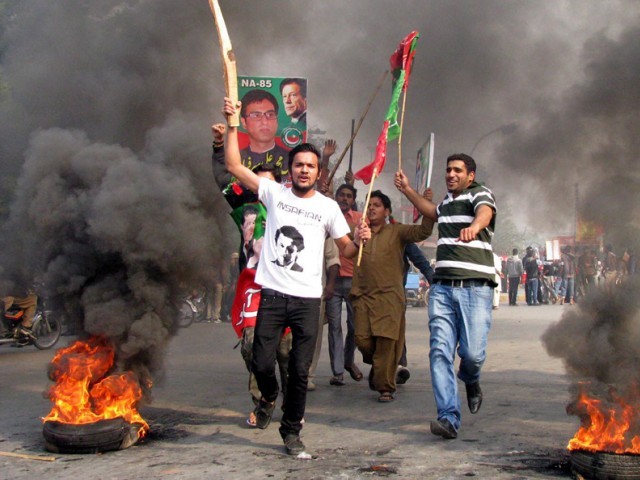 It’s December 8. Faisalabad is witnessing the process of being shut down by ardent PTI supporters. This, of course, enrages PML-N who can’t sit back and watch their political foes try to halt their stronghold.

Violence, casualties and deaths are an inevitable addition to this process. It’s quite surprising that so far one man has lost his life. I was expecting a higher number, since life sells cheap here. And the blame game has already begun:

“Because of you (PTI), Pakistan’s economy has suffered immensely” – Parvaiz Rashid

“Their Gullus were involved in all the clashes today” – Imran Khan

This, however, did lead to some ‘result’:

“An election tribunal issued on Monday a short order calling for the opening of voting bags in NA-122 and PP-147,” reads an Express Tribune news story.

But is it really worth a human life?

Is this really worth the meaningless feud that is taking place between the cronies of Imran and Nawaz?

And like any other tragedy, his death should equally be mourned. Even if Imran makes an impact today, it won’t be any good now.

Extremely saddens to hear about death of PTI worker- trust me that's what their leaders want – playing victims. #LockDownFaisalabad

Govt Made The Mess Out Of The PTI Peaceful Protest. #LockDownFaisalabad

I guess, pol parties who wanted chaos in the country,must be excited to see deadbodies & taking credit of being victims. #LockDownFaisalabad

PTI supporters, you have all the right to hold peaceful demonstrations, since that falls within your civil rights. PML-N supporters, the same goes for you. But taking a life is NOT your right. But it’s not your fault.

The actual fault lies in the higher echelons. It exists within our government and opposition – within our polar parties.

The Punjab police chief has issued strict orders not to let anybody take the law into their hands. PTI leader, Arif Alvi, stated that negotiations will not go on under these circumstances.

Imran announced his plan C on November 30, which aimed at bringing Pakistan to a standstill on December 16. But he never told us that it will also include collateral damage and deaths. That it will include destruction. That it will affect the common man, who had no say or role in the inception of whatever Imran says he is fighting against.

Wasn’t it the responsibility of both PTI and PML-N that such an issue doesn’t occur?

If they can’t handle a simple rally, how can they handle an entire country? One that both are very much willing to rule.

Personally, if I were in Imran’s shoes, I would’ve handled it differently. I wouldn’t have let a man die on my watch. I would have waited for the next elections rather than staging “dharnas” (I believe patience is a virtue which he does not possess). Rather than marching from city to city, I would’ve paid attention to Khyber Pakhtunkhwa, where I already have seats in majority. In 2017, my work would’ve spoken for me, rather than my fiery speeches. On the other hand, if I was to be put in Nawaz’s position, I would have tried to negotiate a compromise with Imran. I would’ve recognised PTI and its rising significance in the political arena. And I wouldn’t have disrespected the constant demands of millions of supporters, and would have set up a fair and just judicial commission for the recount of votes.

In an idealistic world, PML-N would have met PTI’s reasonable demands and discarded the rest. In an even happier scenario, PML-N and PTI would have formed a coalition and peace would prevail and we would all live happily ever after. But, politics is dirty and it’s outcome, dirtier.  In their on-going mudsling and name calling match, guess who has to bear the brunt of it? Pakistan. Our nation and our people.

If a sense of conscientiousness were to prevail (which would be a miracle) within our leaders, supporters would not be used as pawns to storm the parliament building or media offices, they would not be shot at blindly by government organisations – their lives would be revered.

While I write this piece, the monstrosity we call Pakistani politics continues to make a debacle of itself and it doesn’t seem like this political drama plans to end anytime soon. But if Imran Khan and Nawaz Sharif do ever happen to stumble upon this article, here is my message for you two:

Please put aside your egos, get a grip on your overly emotional only-for-TV-antics and reach a suitable compromise for the sake and sanity of your supporters and for the betterment of our nation. Enough of our blood has already been spilt. We are done.