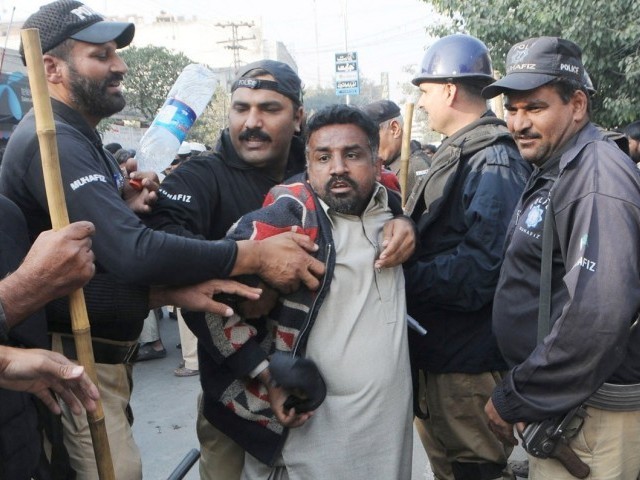 A scuffle broke when protesters tried to move towards the CM House (7-Club Road) Lahore, via Davis Road, where the presidential convoy was scheduled to pass through. PHOTO: NNI

Putting on over 400 runs in a one-day international game is at best a distant dream for Pakistan’s national cricket squad. However, the country’s blind cricket team made it look like child’s play as they accumulated a mammoth 418 runs in just 40 overs during their match against Sri Lanka.

Sadly, the performance went largely unnoticed. Had it been Misbahul Haq and his band of brothers who accomplished something similar, the chequebooks of prime ministers and presidents would have lost a few leaves.

One can only imagine the score they would have ended up with had they been given a full 50 overs instead of the allotted 40 at the fourth Blind Cricket World Cup in Australia. The team managed to achieve this gargantuan feat despite the fact that they lost two early wickets with a mere 47 on the board.

Enter Haroon and Anees who steadied the innings and made mincemeat of the Sri Lankan bowling with shots all around the wicket. Anees’ swashbuckling 72 of just 44 balls boosted Pakistan’s run rate immensely and the greens’ charge was continued by Muhammad Akram after the former lost his wicket. Akram hammered home a century and went on to score 114 runs, but the real star of the show was Haroon who scored—wait for it—180 runs of 116 deliveries.

In reply, Sri Lanka could only manage 194, a decent total in its own right, from their 40 overs. However, when the other side has just obliterated your bowling attack, even mounting a somewhat serious challenge can become a herculean task.

The blind cricket team, which has been on a bit of a roll recently, almost symbolically saved their best performance for the International Day of People with Disabilities. It continued its brilliant run in the tournament and is now poised to face the hosts in the semi-finals.

But the Pakistani people are more concerned over their national squad’s prospects at the ICC World Cup next year. With the bouncy Australian tracks likely to unsettle the country’s finest batsmen, it is unlikely the main squad will be able to match the performance put in by their fellow countrymen at the blind world cup. Regardless, there is almost little or no interest in the country apart from the odd social media activist posting a ‘we are proud of you’ tweet or Facebook status update.

Elsewhere at the World Cup India beat Australia by 9 wickets with 31 overs to spare! & Pakistan beat Sri Lanka by 224 runs.

In a country where the differently-abled are treated as secondary citizens by a large number of people, such inspiring moments need to be trumpeted by those claiming to be the champions of the masses.

Perhaps even a certain former captain who forgot to mention his team when he lifted the cricket world cup in 1992 can convince his legions of fans to put on their televisions and support these noble warriors. Did I hear you say neither state television nor any other local channels are showing it?

Why should they? Ratings would probably be miserably low and as a not-so-old saying goes – ain’t nobody got time for that.

However, the people who do seem to have time for the blind are the police, albeit for the wrong reasons. A group of blind men, pressing for an increase in their job quotas, were manhandled by the Punjab police outside the Lahore Press Club. Perhaps the cops would have given these unsung heroes the respect they richly deserve had they watched the Pakistani team’s performance today.

A sub-editor at the Peshawar Desk of The Express Tribune. He tweets at @fahhdhusain (twitter.com/fahhdhusain)

Will Karachi ever receive the same affection as Lahore?

Today, one of the greatest voices in the Subcontinent was silenced

Why does Virat Kohli turn Pakistan so green?