Robots with guns (and morals?) 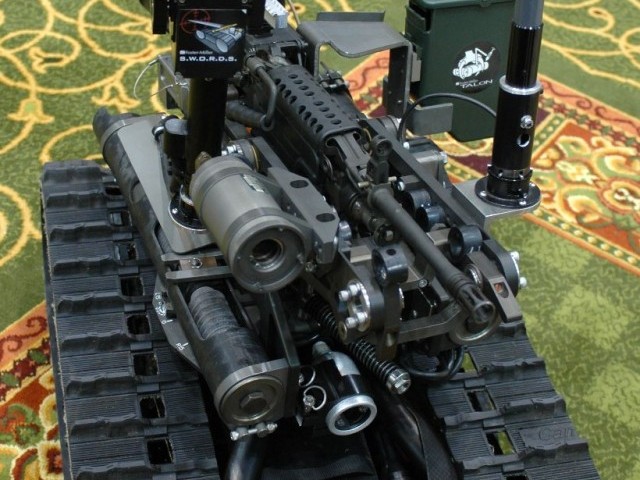 Fully armed robots were to be used on the streets of Iraq. PHOTO: GIZMODO.COM

Robotic warfare is here. US soldiers are killing insurgents across the world with remote controlled drones.

A worried UN investigator Christof Heyns has urged the UN to set up a panel on the ethics of robot weapons. We in Pakistan are fighting faceless machines now, they appear out of nowhere, shoot us down and disappear.

The right kind of war

Would you want a war where your sole existence depends on the decision of a machine which cannot see, hear or feel? War is supposed to have consequences that may be lost if the current trend of robotic warfare continues. When war is dehumanized and victims made faceless, death turns into a statistic. What happens when you remove humans from the battlefield? It’s time we start thinking about the question because this maybe the future of combat.

In a traditional war, one consoles oneself with the thought that no one wants it to continue. No mother wants hers son to die in the battlefield – but does the army care if one of their drones or robots is shot down? Certainly not.

What would be the incentive to end a war in this case?

When the war in Afghanistan kicked off, the US military only had a handful of drones or unmanned weapons on the battlefield. Now it’s one of the military’s main concerns as they race to outdo the competition developing innovative robots that do the dirty work.

“The international community urgently needs to address the legal, political, ethical and moral implications of the development of lethal robotic technologies,” said Heyns.

Earlier, her predecessor, Philip Alston, had also called for a halt to CIA-directed drone strikes, saying that the killings ordered far from the battlefield could lead to a ‘Playstation’ mentality.

Satisfying bloodlust with a joystick

He was probably worried that soldier seeing the battlefield through a World of Warcraft-like interface, complete with tagged enemies and multiple channels of chat could be dangerous. Because a faceless war has no consequences for those fighting it. People are programmed to feel something when they kill a fellow human being, despite that, millions of them partake in video game violence the world over.

Remember the army recruits who were capable of Abu Ghraib, imagine what the scale of violence would be if they were put in control of a drone and allowed to fight a war without any consequences.

Soldiers suffer debilitating psychological conditions after their tours in war zones like post traumatic stress disorder, shell shock. The Iraq weapons inspector, David Kelly committed suicide after his report was used as the basis for the war that killed millions of innocents.

Victory is not supposed to feel like napalm in the morning.

The important thing to keep in mind is that ethics may get lost when you have robots fight wars for people. Because at the end of the day, robots, like cruise missiles loaded with atomic warheads mean destruction without consequences.