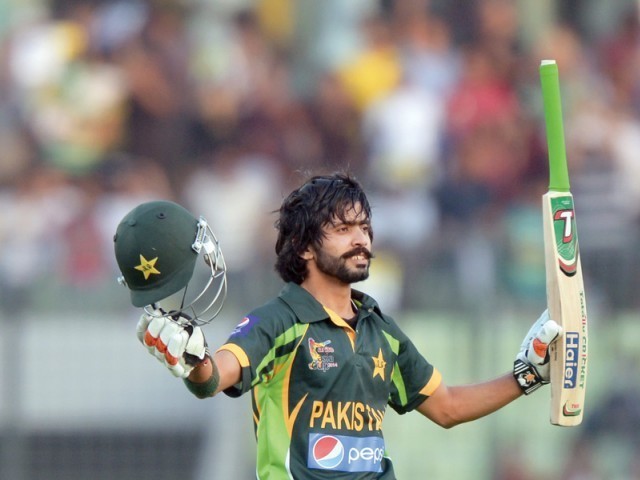 Fawad Alam, after scoring an unbeaten 114 against Sri Lanka in the Asia Cup 2014. PHOTO: AFP

Fawad Alam has been left out from the ODI squad, again. And right before the World Cup, again. The last time when he was dropped, in November 2010, his batting average was just below 40; currently his career average is more than 45 runs per inning with a decent strike run rate of 75.04 – despite batting under immense pressure most of the time.

Leaving him out of the national team is something I just can’t understand. Not only has he performed above average, he has also given Pakistan some much needed wins over the past year.

He is the second highest ODI run-getter for Pakistan, with an impressive average of 69.00 and smart strike rate of 77.35. And let’s not forget that most of his innings take place at a time when the team needs substantial runs. Opener Ahmed Shahzad is the only man ahead of Alam – and that too with an average of 39.45 and strike rate of 74.82 in 11 innings. But while Shahzad has been selected for both 50 and 20 over formats, Alam has been benched for no apparent reason.

Alam is the same man who scored a magnificent century against Sri Lanka this year in the Asia Cup final and gave the other side a respectable total to defend. The batting performance of the top order was tragic in that match and Alam was the one who rescued the game. Earlier, he contributed key 74 runs against Bangladesh in the same tournament, despite the fact that it was his first ODI after almost four years.

His bat continued to score in the three-match away series against Sri Lanka, August this year. Pakistan won the first game after a 147-run partnership between Alam and Sohaib Maqsood. Alam departed at 62 runs after putting Pakistan on a commanding position. He scored 30 runs in the second match and, in the final ODI, he topped the score card by scoring 38 runs not out. Pakistan could only set the target of 103 runs for the hosts in that match, so his contribution was much needed, to say the least.

After scoring 188 runs in only two innings of 2014 Asia Cup, Alam became the top scorer for Pakistan in the three-match ODI series against Sri Lanka with 130 runs.

Chairperson PCB, Shaharyar Khan, called him a real fighter and urged other players to follow his example. During the time period, he also emerged as a leading candidate for T20 captaincy. Osman Samiuddin, former editor of Cricinfo Pakistan, also highlighted Alam’s strength and abilities in one of his articles.

But all of a sudden, with no clear reason, he has been dropped from the ODI squad.

Yes, he was somewhat unsuccessful against Australia during the ODI series but it was only the first match where he didn’t perform well and left the wickets with just seven runs. In the second match, he scored 20 runs (not out) and in the last ODI, he was controversially given an out when Steven Smith changed his position to take the catch. ICC had to issue a statement on the situation.

But in spite of his less impressive performance, he scored more runs in the series than Misbahul Haq and Shahid Afridi, while Umar Akmal managed to score only 55 runs in two matches of the same series. Prior to this, Akmal scored only 23 runs in three innings against Sri Lanka, with the worst average of 7.66 runs. While Akmal did play an inning of 102 runs (not out) against Afghanistan, his performance hasn’t been impressive against other teams. In his last eight innings, he could score only a total sum of 151 runs against teams like India, Sri Lanka and Australia, with a poor average of 21.57.

Yet, we see his name on the squad for both formats, despite his continuous failures – thanks to the selection committee.

The chart below displays Pakistan’s batting line performance in 2014. Alam tops the score card with the best average and smart strike rate.

Runs by Pakistani batsmen in ODIs 2014.

Many criticise that Fawad often plays at a relatively slow pace; they ignore the fact that he plans his innings according to the situation. But even if we keep that critique in mind, we can see that Alam has still proved his worth. Comparing his record with Mohammad Hafeez, Younus Khan and Misbah, we can see Alam’s match winning abilities quite clearly. The following chart reiterates this.

Averages and strike rates of some Pakistani batsmen.

In the new squad, Nasir Jamshed has replaced Alam in ODIs. But on what grounds?

Just review the on-going Quaid-e-Azam Trophy Gold League. Alam, representing NBP, has scored 521 runs in eight innings, including a double century with the average of 74.42. On the other hand, Jamshed, also playing for NBP, could only score 124 runs in seven innings with a poor average of 17.71. Yet, Jamshed is selected and Alam is dropped – doesn’t that show the unfair treatment Alam is subjected to by the PCB?

The ODI series against New Zealand is important, as the World Cup is not too far. The mega event is being held in Australia and these matches are a practise for Pakistani players, to become acquainted with the pitches.

Now, just compare the performance of Alam with the rest on the bouncy Australian pitches. Misbah’s Test inning record is presented below – as he has never played ODIs in Australia.

It may also be mentioned that Alam is the only batsman in Pakistan’s domestic-cricket history, who has scored more than 8000 runs with an average of 56.73. Even greats like Javed Miandad, Hanif Mohammad, Zaheer Abbas and Inzamamul Haq couldn’t achieve this milestone.

Statistics show that even Alam’s first class batting average is better than most of the greats.

He has proved his credentials internationally as well. Having 40 plus average in both Tests and ODIs is not an easy task.

Alam is the second highest run-getter for Pakistan in 2014 despite playing fewer matches than others, his average and strike rate is still better than many included in the side, chairperson PCB called him a fighter, he performed equally well in first class cricket… but he is still not on the squad. Amazing!

Many argue that he is a better option for Tests. If this is the case, then why have the selectors ignored him for Test format over the past so many years? Despite Fawad’s consistent run scoring ability, selectors deliberately left him out from the Test series against Sri Lanka, Australia and New Zealand – without any reason. The man who scored 168 runs on his debut has only played three tests so far!

Why he couldn’t play a single test after November, 2009, despite having a healthy average of around 42 runs per inning in tests, is something our selectors need to answer.

Why, and on what grounds, have our selectors wasted five precious years of such a talented player, who has shown his merit in all formats?

I would also like to quote the comments of a Sri Lankan and a New Zealand cricketing fan. They commented on Cricinfo.com after reading the news of Fawad’s exclusion.

“I am a Sri Lankan. Sorry for Fawad Alam. If he doesn’t deserve a place in top six, then no one else deserves a place. He was the anchor. He starts slowly, but can accelerate later. A very good batsman. I think Pakistani selectors are out of (their) mind. Only around 90 days left for the World Cup. And they are messing with players.”

“As a New Zealand fan, I was looking forward to watching Fawad Alam bat against us. Very disappointed he has been left out. There must be something else to it. If you just straight up look at his stats, asides from the top international players, there is almost nobody in the world who has comparable averages. (sic) Just can’t understand the sense in such a player being left out, especially when he has performed when given his opportunity. Gosh!”

Everyone who knows anything about cricket would agree that letting Alam sit this one out is a grotesque mistake.

Selectors may still give him a chance in the last three ODIs against New Zealand but would they like to tell the cricketing world why they have axed him for the first two ODIs, despite his outstanding performance?

And why, exactly, did they prefer having Jamshed and Akmal in his place?

What more does Alam need to do in order to cement his place on national squad? The PCB needs to stop treating such a good player in such a horrendous way, otherwise we’ll start pushing talented people away, until we are left with nothing but the mediocre.