Why can’t we invest in better helmets for our cricketers? 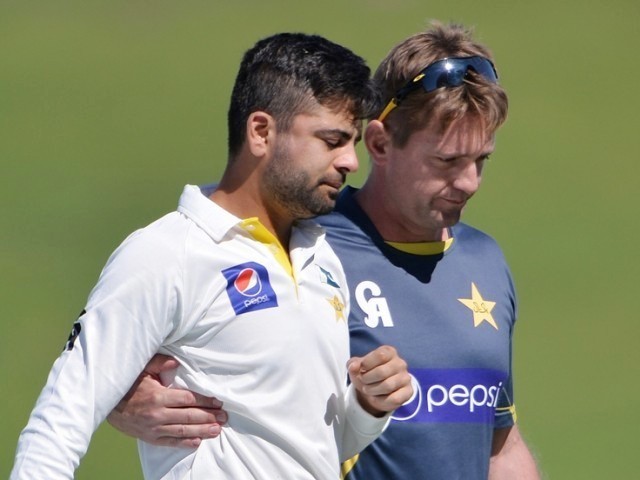 Ahmed Shehzad suffering from a cheekbone fracture after getting a blow on his right temple. PHOTO: AFP

On November 10, Ahmed Shehzad considered himself to be the unluckiest of cricketers when a bouncer from Corey Anderson not only deprived him of his maiden double century in Test cricket, but also knocked him out of the Test series when he was in the best form of his life.

But just a couple of weeks later, he was forced to pull away his thoughts when a similar delivery, hitting the same spot on the body, knocked Phillip Hughes out of this world. Both these openers were hit by a cricket ball carrying a momentum of 350, on either side of their foreheads, Shehzad on his right temple while Hughes was hit on his left.

The question that arises is, what benefit does a helmet offer to a batsman?

Cricket is a very technically advanced and vanguard game as far as judgments and umpiring decisions are concerned. State of the art technology is used, including the Drag Reduction System (DRS), Hawk-eye and Hot Spot. But viewing from a safety and performance enhancement criteria, there is a severe lacking, especially considering this modern era of scientific research and performance augmentation. The helmet used by cricketers is the least efficient among all other sports in which players require helmets, in terms of aerodynamics, safety and mobility of the players.

Whilst watching the batsmen of the 70s and 80s facing lethal bowling attacks by Malcolm Marshal, Dennis Lille, Sarfraz Nawaz and Imran Khan, wearing helmets without face protective grills, modern cricket fans are engulfed with fear. Although back then, the helmets had a very important feature; they had ear protectors because the ears are the most sensitive part on the head. The grill is not as important as protecting the sides and back of the head.

Recalling Shivnarine Chanderpaul falling down after getting hit at the back of his head from a ball by Brett Lee, Shehzad facing a cheekbone fracture after getting a blow on his right temple, and Hughes losing his life after a blow to the left side of the helmet grill, all these instances demand that better safety precautions be taken for sensitive areas like the jaw and temples.

In my opinion, the best option seems to be the baseball helmet; it looks like an ancient war helmet. It is human nature to, voluntarily or involuntarily, turn your head when you sense that something is being hurled at your face. The same is the case with batsman. The baseball helmet covers the head much deeper, along with temples, ears and some part of the neck.

Cricket helmets offer air resistance and are also devoid of aerodynamic design. Only a few cricketers, including Kumar Sangakara and some Kiwi cricketers have been seen wearing modern, aerodynamically designed helmets.

The International Cricket Council (ICC) needs to formulate rules for the safety of its players, whilst considering the fact that mobility and comfort of the batsmen should be respected. A batsman, while wearing pads, arm guards, chest guards, thigh guards, helmets and even more, is not completely free to play. Therefore, the ICC needs to encourage its sponsors and cricket equipment manufacturers to come up with new designs, producing safety equipped and aerodynamically efficient products with a greater capacity to absorb shocks, all the while being lighter and covering greater areas of body. Just like hockey sticks are being manufactured using carbon nanotubes, reducing its weight significantly, the ICC should make it obligatory for players to use these technologically advanced game gears so as to get the most out of this gentlemen’s game putting the lives of these players on the line.

Younus Khan: Rekindling the charm cricket once had