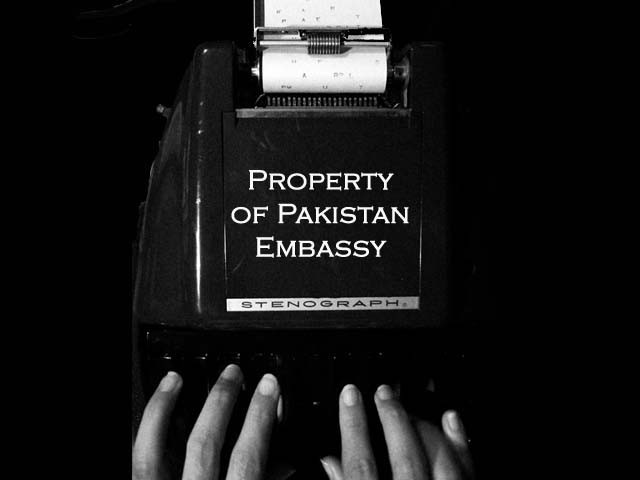 Shorthand? Seriously? In 2014? Haven’t they heard of digital voice recorders and smart phones and emails and tablets?

We’ve all read reports of the Belgian police (mis)identifying a Pakistani man as a terrorist. They thought his cricket bat (wrapped in a t-shirt to protect it from rain) was a rifle. The news was followed by reports that the Pakistani embassy in Belgium has sacked the young man’s father for damaging Pakistan’s reputation.

“Muhammad Tufail Abbasi, steno typist in the commercial section in the Embassy of Pakistan, Brussels, has been transferred back to the headquarters by the Ministry of Commerce on completion of his four year tenure.”

Now let’s talk about something even more ridiculous about this story: the Pakistani embassy in Belgium has a steno-typist on their staff?

I had to look up “steno-type”, since I’ve never seen one in my life:

“A keyboard machine resembling a typewriter, used in a system of phonetic shorthand”

Basically, a steno typist is a person who operates a steno-type machine to type a discussion in shorthand, which is eventually reproduced in regular text.

Haven’t they heard of digital voice recorders and smart phones and emails and tablets?

Steve Jobs must be turning in his grave.

I decided to give our embassy in Belgium the benefit of the doubt and sent an email (plus two reminders) to the email addresses provided on their website.

Surprise, surprise! I haven’t yet received a response.

Maybe I should have sent them a letter in shorthand.

Why would our embassy need a steno-typist? I wonder to myself. And the following scenarios come to mind (with my fake input on the matter from the Pakistan Embassy in Belgium – PEB, since they never bothered to respond):

Scenario 1: The person takes ‘dictation’ from staff in the commercial section in shorthand and types their letters. Or he’s just a regular typist and there is no steno action going on.

Why are our diplomats still using the 50-year-old method of ‘dictating’ a letter in shorthand symbols which is then typed up in regular English and then printed? Why can’t the diplomatic commercial staff of a poor country like Pakistan type their own letters? What a terrible waste of time and money.

I’ve never seen a typist in my entire career in the private sector, so I don’t see why a government office would need a full-time typist. Why aren’t they composing their own letters or using email?

“Sshhhh… Don’t tell anyone, but the fellows in the commercial section prefer the dictation-steno-typist-shorthand-typing-printing-revision-retyping-reprinting-signature route because that keeps them busy all day so they don’t have to do any real work. That explains why our exports keep getting hit with anti-dumping duties!”

Scenario 2: A steno is required to sit in meetings and issue minutes

In meetings, the global practice is for one of the participants to write down key decisions and circulate them over email. It ensures the minutes are intelligent and saves cost. If the whole discussion needs to be archived, the solution is a voice recorder.

“Pssst… The steno-typist solution probably works better because it lets our diplomats relax for the rest of the day after a 9am meeting because no work can happen until the steno is done typing everything up!”

Scenario 3: The designation is out-dated and the person does work that involves little typing and no stenography.

For Pakistan’s sake, I hope this is the case and our steno-typist actually does a job that’s relevant in the 21st century. But what a lazy HR department we have! It’s been 30 years since steno-machines became extinct and they haven’t bothered to revise the title and the job description? What are some of the best brains in the country (who opt for the foreign services after topping CSS exams) doing all day?

They are saying the steno-typist may have been transferred out of Belgium as punishment for damaging Pakistan’s reputation. Maybe the entire foreign office should be fired for wasting the public’s tax money on antiquated office practices, not to mention ruining Pakistan’s reputation by letting the world know that we still use stenos in 2014.

Pakistan has 110 missions across the world. I shudder to think that we have 110 steno typists huddled over their steno-machines?

I hope one of them reads this article, converts it to shorthand using a steno-machine, types it up again on a regular typewriter and gives a print out to the ambassador to Belgium to read. And since I haven’t received a response to my multiple emails, I’ll keep an eye on my mailbox (the physical one at the door, not the one at Yahoo.com).

Maybe I’ll get a response from our embassy in Belgium… written in shorthand.