Why didn’t the Pakistan embassy stand up for Assim Abbasi? 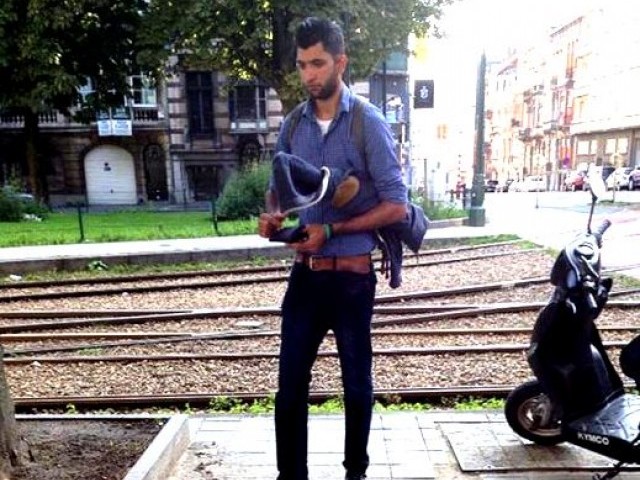 This isn’t even an honest mistake, a slip or human error – this is outright negligence on the part of the Belgian authorities and is deserving of a full public inquiry, compensation to Mr Abbasi alongside an apology to his family. PHOTO: Twitter Handle (@joelrubinfeld)

In 2004, I travelled to Belgium to visit my uncle who was residing and doing business there. I found the people to be very welcoming, the architecture was outstanding and, of course, the world-famous chocolate was delectable. So when news emerged this week of a Pakistani, Assim Abbasi, residing in Belgium being wrongfully identified as a crazed, fundamentalist gunman, when in fact, he was holding a cricket bat, sent out alarm and disbelief.

Understandably, emotions are running high following the attack on a Jewish museum in Brussels but the fact that the Belgian police and media failed to make the necessary checks meant an innocent man’s glittering future is now in tatters.

However, my shock wasn’t limited to the behaviour of the Belgian authorities but increased tenfold when I came to learn that the Pakistani embassy, which is supposed to be a haven for overseas Pakistanis, actually penalised Mr Abbasi’s family. Assim’s father, Tufail Abbasi, who worked as a stenotypist for the Pakistani embassy in Belgium, was told that his position was no longer tenable as his son had supposedly “shamed” the reputation of Pakistan in Belgium; as if drone strikes, polio endemic, being labelled a failed state and rampant corruption have done wonders for our reputation as Pakistanis abroad! Assim’s father has now been relocated to work at a different embassy which means uprooting his whole family, not to mention the disruption and embarrassment that surrounds this entire fiasco.

I am completely dumbfounded by the decision of the Pakistani embassy in this regard. Most embassies, when faced with the prospect of their citizens being wrongfully accused or mistreated by police authorities in different countries, come to the rescue of these individuals by assisting them with legal counsel. They very rarely accuse the mistreated individual or punish them in such a ferocious manner.

If our own embassy will not be our saviour in testing times, then who will overseas Pakistanis turn to in their time of despair?

In 2013, an Indian diplomat in the United States was arrested and strip-searched which in turn created a massive diplomatic furore and tarnished relations between India and the US. In addition to this, the British embassy based in Islamabad has a whole department dedicated to forced marriages whereby they carry out “rescue” operations of British citizens they believe are about to enter into a forced marriage. Just recently, a British man was arrested in Morocco for illicit activities when the British embassy stepped in, secured his release and eventual return to the UK.

When it was blatantly clear that the Belgian authorities had made a huge mistake, why did no one stand up for Assim and his family?

In such a delicate and confusing time, Assim should have been supported and comforted instead of lambasted for a crime he never committed. What is unbelievable is that our authorities have turned around and blamed one of our own instead of standing firm and approaching the Belgian authorities demanding an explanation. If our own embassy will take such a negative approach to the plight of a Pakistani, then what hope do we have of being treated fairly by other countries? Who will be there for us in our time of need?

Although the Pakistani embassy has said that Mr Abbasi’s time came to a natural end and he had been reinstated elsewhere, this incident will have formed the basis of their decision. I felt such utter heartbreak and disappointment for Assim and his family. It is incidents like these that will isolate our youth from the love they have for their country. The newer generations will feel disillusioned and let down by a country’s representatives who should have put their rights first instead of bowing down to the whims of the foreign assumers.

I, for one, will not be paying a visit to Belgium anytime soon regardless of the appeal of its chocolate or tourist sites because any one who hurts my Pakistani brethren, hurts me irrevocably. It is a shame our foreign institutions don’t feel the same way.